This article shares some of the research carried out for the new IDTechEx report, Electric Vehicles, Military, Security, Police 2011-2021 . This market is becoming a more important part of the overall market for electric vehicles by land, water and air. Mainly that is driven by applications on land and in the air. The military, homeland security and police sector of electric marine vehicles is declining in percentage of the whole market for marine electric craft despite growing in absolute terms.
Rapidly growing market
By value, the market for military, security and police electric vehicles will grow almost tenfold in value over the next decade. These figures exclude regular electric cars employed by these organisations with minimal adaptation. We also exclude large nuclear electric and diesel electric submarines and ships as these use older technology not usually referred to as that of an electric vehicle. The market remaining has three segments in terms of vehicle design.
Some are born electric
First are vehicles "born electric" and designed from the start specifically for one of these purposes, most usually a military one. Unmanned Aerial Vehicles UAVs are one focus. That includes a $517 million unmanned surveillance airship currently being built for the US Department of Defense by Northrop Grumman and unmanned surveillance aircraft made by Boeing, Aurora Flight Sciences and AeroVironment. The Korean military will deploy its own UAVs from 2015. Under water, there are surveillance jellyfish being developed by the US Navy NAVSEA Center. 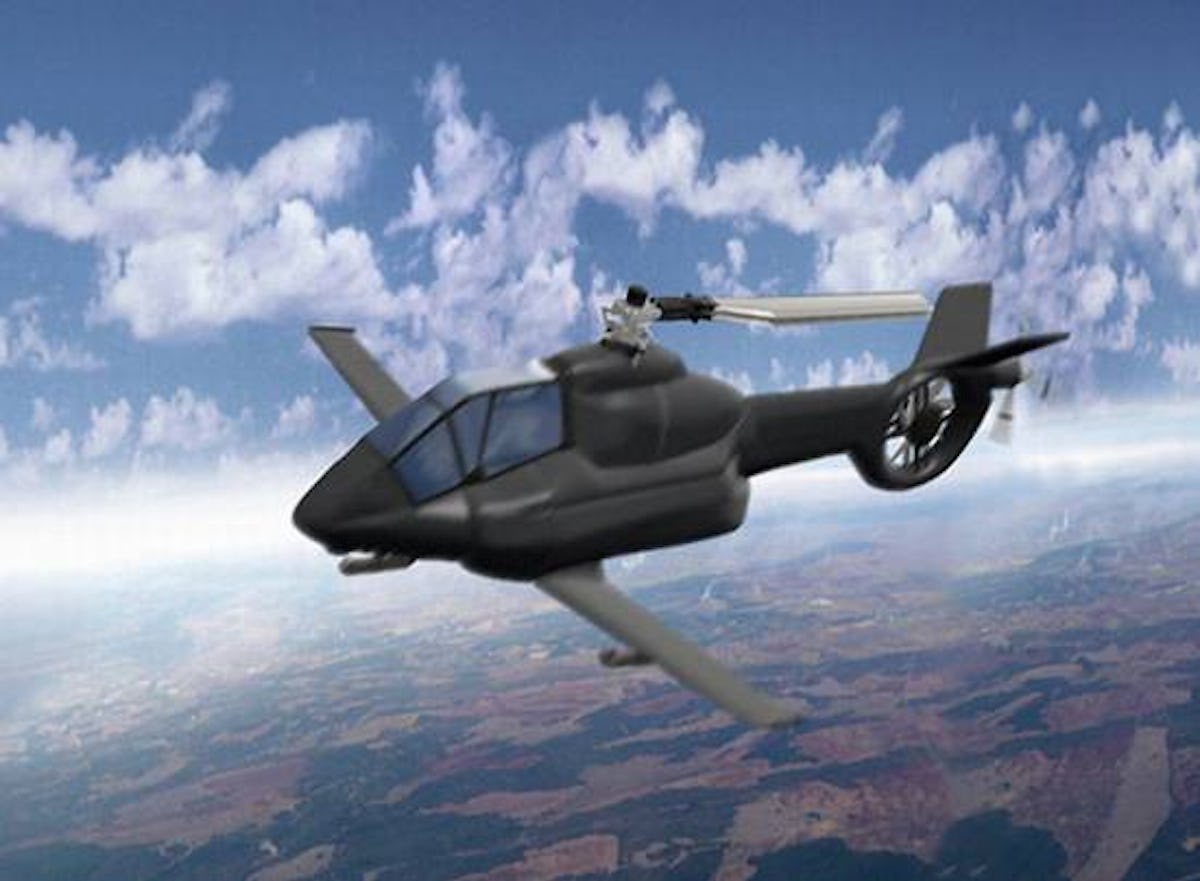 Hada electric UAV
Source: ecofriend
Dual purpose
The second category is where a vehicle is developed for both military and civil use from the start such as many Autonomous Underwater vehicles AUVs from Kongsberg Norway and others. Indeed JAMSTEC in Japan and the Indian Government DRDO have already deployed such AUVs.
Adapted civil vehicles
Thirdly we have electric vehicles for civil use that have minor modification or no modification for use as military, security or police use. Many of these are not borne electric because they involve a platform developed for non electric powertrains an example being Daimler AG Mercedes Benz non military vehicles. The electric powertrain - hybrid or pure electric - is sometimes fitted as an afterthought.
Military dominates
Of the three closely related applications considered - military, security and police - the largest is military. Primarily, this is driven by the US DOD plan to reduce fuel usage, and therefore logistics problems, by 75%, with the actions of the US Army particularly notable in this respect, and the trend toward unmanned military vehicles such as those developed at the University of Michigan.
Sometimes it starts with civil initiatives
Certain civil initiatives will belatedly be adopted by military forces. An example is the electric nosewheels for large aircraft. These are being developed in Germany by DLR German Aerospace Center and in the USA Delta Airlines has been involved because it can save a lot of expenditure on vulnerable hydrocarbon fuel. This makes the aircraft an electric vehicle controlled by the pilot when on the ground, so it does not have the vulnerability and delay of waiting for a tow tug on landing and it saves a large amount of fuel, increasing range, when taxiing and queuing for takeoff. Megawatts become kilowatts.
Usually it starts with military initiatives
However, most of the electrification of military land, water and air vehicles is initiated by military forces, notably in the USA. Plug in hybrids will be particularly favoured but decision making is slow. However, after ten years of largely successful trials, large orders are starting to be placed.
Multiple benefits
Electrification of vehicles makes previously impossible missions and response times a reality. The benefits of electrification to military, security and police forces are many and varied. A plane landing purely electrically is almost silent and therefore covert. Electric drive trains emit almost no heat, air or noise signatures making it more difficult for missiles to home in on them and they are almost maintenance free particularly when employing ac motors from suppliers such as Siemens AG.
Hybrid electric vehicles, with their increasingly powerful traction batteries, can provide silent electric power when the powertrain is switched off, permitting covert surveillance and providing supporting all manner of other battlefield equipment. Military, security and police forces can approach targets silently in all electric mode.
Fault tolerance
Electric motors, batteries, fuel cells (eg Intelligent Energy) and so on can be distributed throughout a land, sea or air vehicle resulting in exceptional damage tolerance and redundancy. Impact fires are largely eliminated if liquid fuel is not needed. Miniature surveillance devices such as electric bats being developed by the University of Michigan, robot flies and hummingbirds and robot fish can be so cheap that they can be deployed in huge numbers, collaborating in swarms and virtually indestructible.
Key enabling technologies
The main enabling technologies that will confer improved cost, safety and performance to land, sea and air military electric vehicles over the next decade include energy harvesting, range extenders, new traction batteries and electric motors and smart skin.
Multiple energy harvesting
Multiple energy harvesting increasingly provides partial or total independence from charging stations. It includes photovoltaics, increasingly thin and flexible, as with the upper atmosphere UAVs of Boeing working with Qinetiq in the UK. Electrodynamic harvesting includes regenerative braking on land and soaring of aircraft but also energy harvesting dampers (shock absorbers) and even active suspension by land and water. Thermoelectric harvesting is also increasingly of interest.
Hybrids converge with pure electric
Abandoning the internal combustion engine in hybrids, is starting with smaller, lower cost, more reliable, longer lived internal combustion engines with superior fuel economy. They are designed for the near constant torque required, the traction battery managing the surges. However, third generation alternatives in the form of mini turbine and fuel cell range extenders are hot on their heels and offer extra benefits. 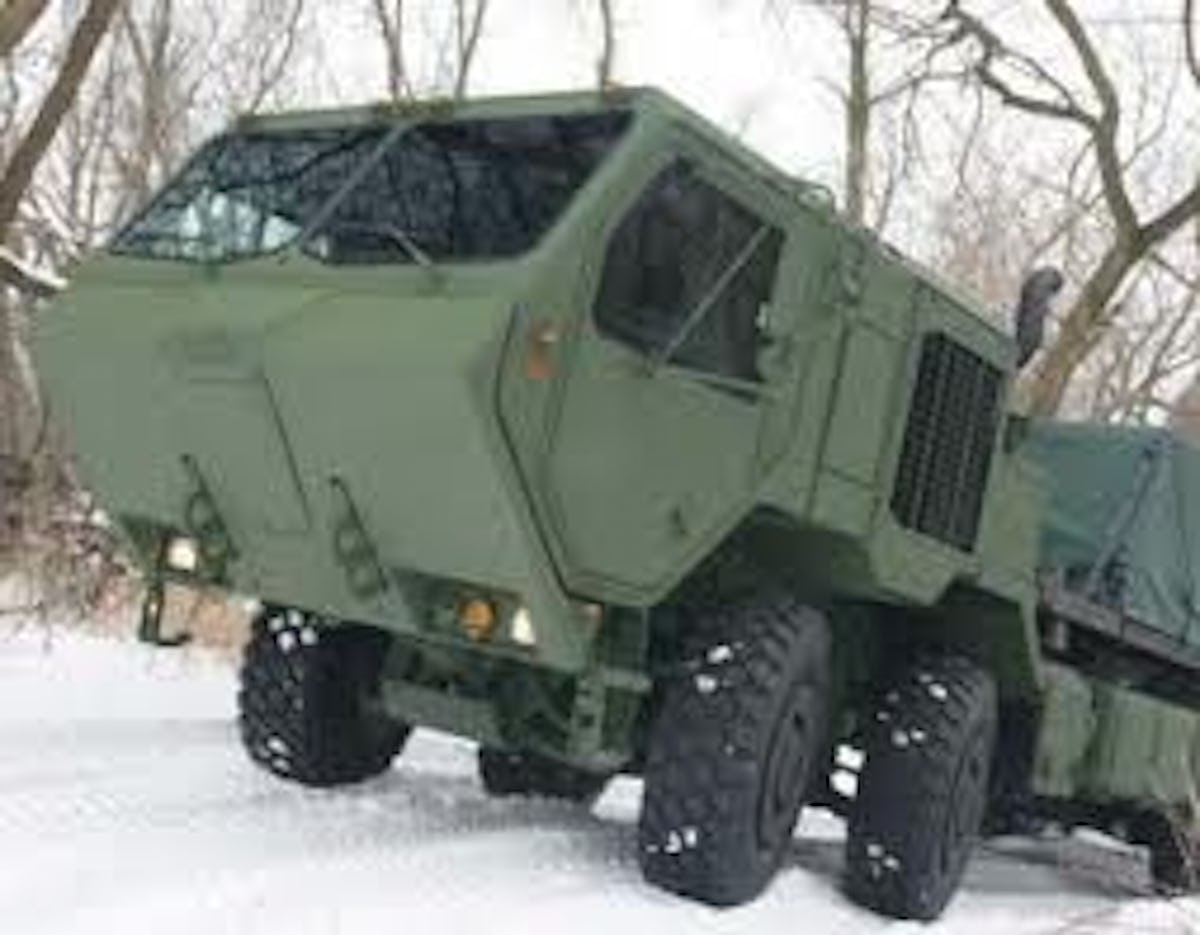 Oshkosh HEMITT A3
Source: armedforces-int
Progress with traction batteries
Second generation traction batteries are almost all safer and more affordable forms of lithium-ion battery thanks to using less cobalt or no cobalt. Lithium iron phosphate cathodes (eg Valence Technology) are more temperature tolerant and are now widely used in lithium-ion traction batteries for instance. Their electrolytes increasingly consist of polymer film plus gel to reduce the chance of leakage. This construction is more pressure resistant in AUVs and on impact and heavy steel containment is no longer essential, reducing weight. Some anodes are no longer carbon and use lithium titanium oxide and alternatives, one benefit being tolerance of faster charging and discharging. Supercapacitors (ultracapacitors) across the battery also help here.
Third generation traction batteries will be fully solid state and probably inorganic. Some may not carry one reactant because it is air as in zinc air, magnesium air and lithium air batteries but before they are deployed, third generation battery chemistries such as lithium sulfur batteries have already been successfully used in military UAVs.
New motors
AC motors permit regenerative braking as do some DC motors but new motors in military, security and police electric vehicles variously address the need for high performance, thinness as with in-wheel motors and other factors. The needs are so disparate that no one technology will win. For example, the University of Newcastle in the UK is developing an exceptionally light electric motor for the latest Boeing military UAV. Some of these UAVs will deploy for years without human intervention as will some military AUVs.
Smart skin
Thin flexible, increasingly multilayer electrically functional layers are being developed. Such smart skin is planned for wide area, real time structural sensing on aircraft and other vehicles and already widely used as photovoltaics. Expect laminar batteries, thermal harvesting, printed logic and other wider area conformal functional films to be added to this for land, water and air vehicles particularly for military and security applications. Even harvesting the flexing of bodywork is an interest, providing yet more electricity at point of use as with wireless sensors and actuators increasingly incorporated into these vehicles but also directly into the traction battery.
Widespread benchmarking essential
However, although military vehicles pioneered almost all of the most advanced technologies some years ago, that is no longer the case today and benchmarking with all forms of non-military vehicle is now extremely important. It is also no longer true that most advances first take place in the West for vehicles, including military vehicles, it being necessary to benchmark best practice from New Zealand to India. Those taking the broad view are able to participate in the widest variety of opportunities. Consider BAE Systems of the UK involved in military EVs for land, sea and air and Lockheed Martin of the US making AUVs and UAVs etc.
Unique event
For the report, "Electric Vehicles, Military, Security, Police 2011-2021" go to http://www.idtechex.com/research/reports/electric-vehicles-for-military-police-and-security-2011-2021-000269.asp and for a unique event covering the whole subject attend Electric Vehicles - Land Sea Air Europe 2011 in June.