China cannot widely adopt cars. We all aspire to have a car because they are sociable and offer great freedom of movement. However, as the IDTechEx sums below show, they are the worst form of transport in energy used per passenger travelling distance whether electric or not. The picture below is over optimistic, if anything, because two wheelers travel full - sometimes over full! Cars typically travel with empty seats making them even less efficient than our graph shows. Try to finesse the argument with issues of speed and effect on congestion and the car is still in troubled territory as we show below. No more so than China, where most people live in apartment blocks with little parking space let alone charging infrastructure and the chronic overpopulation leaves little space for more roads and roadside charging. 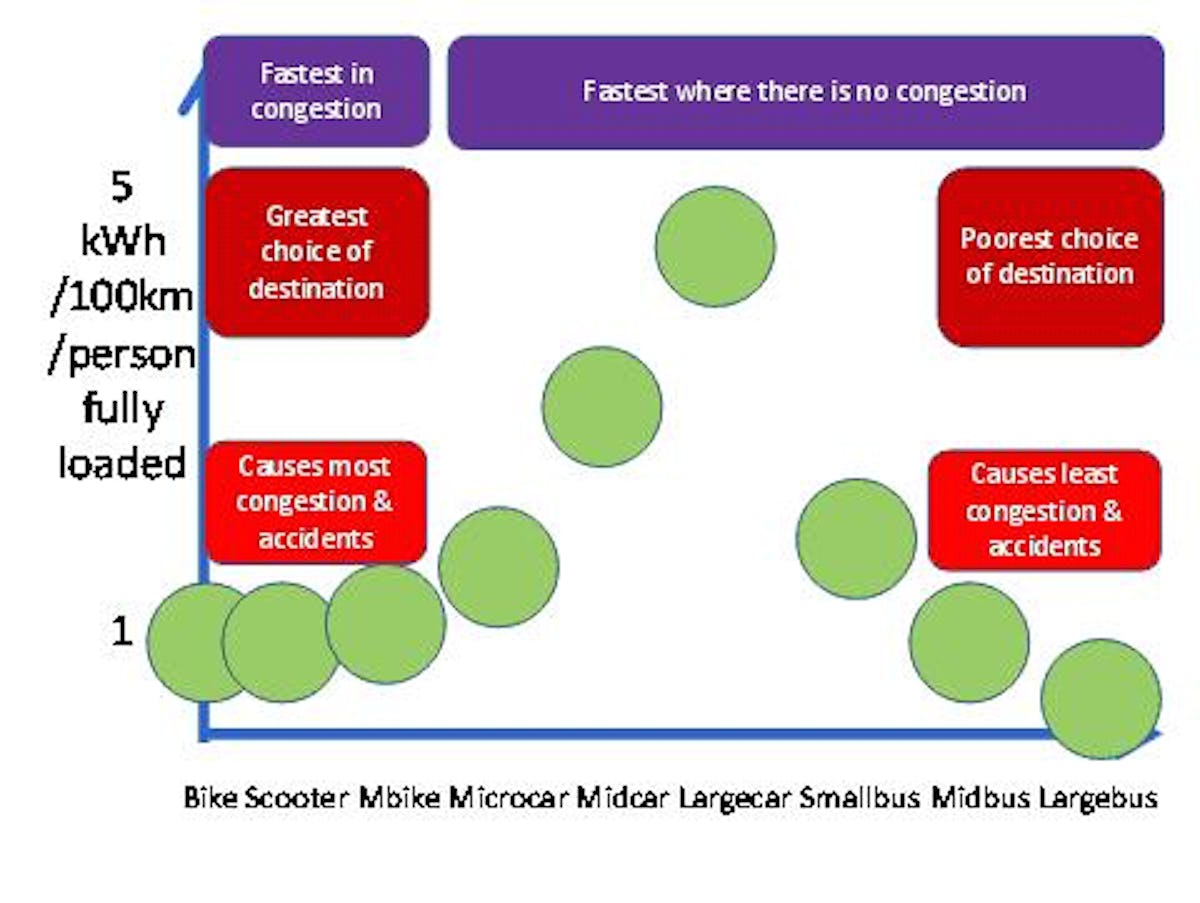 Ma Hongman, a host and economics commentator from China Business Network has recently written in Global Times to express concern about other aspects:
"It's been over 10 months since the central government began offering subsidies to automakers in five cities, including Shanghai, in a bid to lower the retail price of electric cars. However, Shanghai only recently saw the first electric car purchases since the subsidies came into effect - and these purchases were by eight car manufacturer employees who knew each other. So why has takeup been so low, particularly as pressure from soaring diesel and gasoline prices mean car owners are now spending an average 370 yuan ($56.60) for every 200 kilometers they drive? In comparison, an electric car can run nearly 200 kilometers on just one charge, which only costs around 10 yuan ($1.53). Factor in the effect of subsidies, which can make the retail cost of electric cars competitive, and you'd be forgiven for expecting drivers to be flocking to electric. However, the potential savings are not enough to allay consumer fears, most of which are related to the lack of infrastructure and support for electric vehicles and the current limitations of electric car technology. The maximum range of electric cars is around 200 kilometers before they need recharging. But recharge points are scarce, making electric cars only suitable for traveling short distances in areas that have access to recharge points, and impractical for longer journeys between cities."
Ma Hongman explains that, even in Shanghai, the home of Shanghai International Automobile City - a comprehensive auto production base in the city's Jiading district - provision of battery recharging services is not well developed. There are plans for Jiading district to have 130 by the end of this year, while there are no recharge points anywhere else in Shanghai. What's more, batteries have a lifespan of less than 100,000 kilometers, meaning electric car owners face the additional cost of frequently swapping batteries - around 30,000 yuan ($4,587) each. Ma Hongman airs the related issue of after-sales service observing that, with electric cars a rarity, the cost of parts is high. Knowledge among mechanics about how to carry out repairs is nowhere near as widespread as for conventional cars. With after-sales services still a source of difficulty in the conventional car market in China, no wonder consumers are wary about the situation with regards to electric cars. Ma Hongman continues,
"Taking a wider view, while electric cars themselves do not emit pollutants, the methods used to generate the electricity to recharge their batteries do. China's electricity generation is primarily through coal-powered plants, which account for over 70 percent of overall output. If electric cars were to become more popular, this would further drive up demand for electricity, and emissions of pollutants such as carbon monoxide and sulfur dioxide. Air quality in major cities may well be improved, but only at the expense of coal-producing and electricity-generating areas. So now is too early to be focusing on the production or sale of electric cars. Instead, we should first lay down sound supporting infrastructure and policies, and solve the problems and limitations inherent in the technology, such as electricity generation and battery recharging."
IDTechEx takes an even stronger view. The Chinese government decides what will happen and it clearly has to prioritise electric buses and rail - including subways - to make the country more environmental and efficient. True there has been a boom in electric bikes but it is not just Malaysia that is considering banning them because of the congestion and accidents they cause. An increasing number of Chinese cities are banning or at least severely restricting powered two wheelers including electric ones. Fix the currently high relative price of electric cars and the lack service. Even install lots of charging points and you still do not make them ubiquitous in China. Yes, the Chinese government will continue to back the manufacture of electric cars in order to create a huge new exporting industry but sell tens of millions in China - probably not. Has anyone a counter argument?
For more read Electric Vehicles 2011-2021 and Electric Buses and Taxis 2011-2021 .
Also attend the IDTechEx event Electric Vehicles - Land Sea Air Europe 2011 in June.

Was a very good insight from IDTechEx to highlight environmental issues and energetic matrix in a certain region, as key points for developing the electric car. I would like to add the issue of population density, industrial development status and level of economic dependence on the country in its auto industry, as in the case of Korea. Fortunately, in my country, Brazil, the energetic matrix is adequate for the development of electric car. Our hydric sources makes up 63% of our electricity production. The population density isn't at dramatic levels, as in China or India, although the major centers already suffer from a tremendous amount of vehicles, and our economy is heavily dependent on automobile production. The adoption of hybrid or pure electric cars is a matter of intelligence, because of the best performance and efficiency of electric motor. I see, however, economic development based on the auto industry, as reckless and oppressive to China or India, according to their energetic deficits, minerals, like iron and their high population densities.