While the taxi looks and drives like an iconic London black cab, the Fuel Cell Black Cab is powered by an Intelligent Energy hydrogen fuel cell system hybridised with lithium polymer batteries; allowing the vehicle to operate for a full day without the need for refuelling. Capable of achieving a top speed of over 80 mph, refuels in about 5 minutes and produces no emissions other than water vapour.
Lotus Engineering has packaged the full propulsion system including the fuel cell engine and has designed control systems to optimise performance of both the fuel cells and electric drive systems. TRW Conekt led the safety analysis programme, including braking and steering systems, and LTI has provided donor vehicles to assist with the structural modifications to the chassis of the taxis.

The London Taxi is an iconic vehicle, with currently over 21,000 in operation in London alone. A fleet of diesel vehicles this size that operates for many hours of the day inevitably makes a substantial contribution to traffic emissions, not just of CO2 but also nitrogen oxides, hydrocarbons and particulates. Changing to a zero emission taxi would have a marked effect on the pollution levels in London.
With the goal of developing a zero emissions taxi, a partnership of companies, Intelligent Energy, Lotus Engineering, TRW Conekt and London Taxis International (LTI), put forward a proposal to develop a hydrogen fuel cell taxi and approached the British Government through the Technology Strategy Board for funding to support this research. The project was successful in winning funding and commenced in 2008 to develop a fuel cell series hybrid zero emissions taxi based on the LTI TX4 'black cab'.

A taxi's operating cycle of stop/start in city traffic makes it ideally suitable for an electric drive system with the ability to recover energy through regenerative braking. But unlike other public vehicles such as buses or services vehicles such as post office delivery vans, the taxi's duty cycle can be extremely varied, depending on the demands of the passengers. A large proportion of London taxis spend the day just operating in the centre of London, but if requested they will go further afield, no driver turning down the opportunity to pick up a lucrative lengthy fair. Thus the daily mileage and operating cycle of a taxi can be extremely varied. A taxi needs a range of 150 miles, the normal distance covered in a shift but also the ability to be refuelled quickly to get it back out mid-shift for the next fare.
For these reasons, a battery electric propulsion system alone is too limited. The size, weight and cost of the battery packs, even using the latest lithium ion technologies, would be prohibitive for the range required and the recharging time would also limit the practicality in taxi applications. A series hybrid configuration using the hydrogen powered fuel cell developed by Intelligent Energy acting as the range extender is the solution in this collaboration. The hydrogen powered fuel cell acts as the range extender to electric drive with a smaller battery pack and creates a total powertrain with zero tailpipe emissions. With an appropriate hydrogen distribution network in place, the fuel cell could be replenished quickly in service, unlike charging the battery of a pure electric vehicle.
With LTI as the vehicle manufacturer and TRW Contekt conducting the safety analysis and supplying some of the systems, Lotus Engineering's role in this project is as the technology and vehicle integrator. It encompasses a variety of activities to ensure all the systems in the new propulsion system are robustly installed in the vehicle and that the systems work seamlessly together to operate the vehicle efficiently and reliably. To achieve acceptance and be able to operate in London the vehicle must have comparable performance with the standard vehicle, but also be able to meet all the requirements of the Public Carriage Office: turning circle, passenger access, carrying capabilities etc. Also it was a requirement that the external appearance of the instantly recognised London Taxi must not be altered.
The configuration of the propulsion system for this vehicle is Intelligent Energy's fuel cell system with high pressure hydrogen storage, connected via a DC-DC converter and high voltage battery pack to an electric motor, which powers the rear wheels through a single speed transmission.
In the normal operation mode of the vehicle, the power for the electric motor comes from the battery pack. When required, the fuel cell operates on the most efficient part of its cycle to charge the battery pack. This can occur whilst the vehicle is in motion or stationary waiting on a taxi rank.
The system is sized for operating speeds up to the vehicles normal cruising speed of 60mph. To achieve the target maximum speed of 75 mph, the system combines the power output from the fuel cell with the battery. Computer aided vehicle simulation work has been conducted to size the propulsion components and this has determined the amount of hydrogen storage required to enable the vehicle to achieve its target range.
The fuel cell system is a development of two Intelligent Energy single stack evaporatively cooled modules which together provide an output of 30 kW. A single air delivery subsystem reduces system losses and is mounted remotely from the main fuel cell power module to aid packaging. A bespoke liquid/liquid plate heat exchanger enables the heat generated to be used in conjunction with waste heat from other electrical components to heat the vehicle cabin. This is then coupled to a conventional radiator located at the front of the vehicle to remove excess heat. The stacks are housed within the fuel cell power module which is positioned in a modified vehicle transmission tunnel. 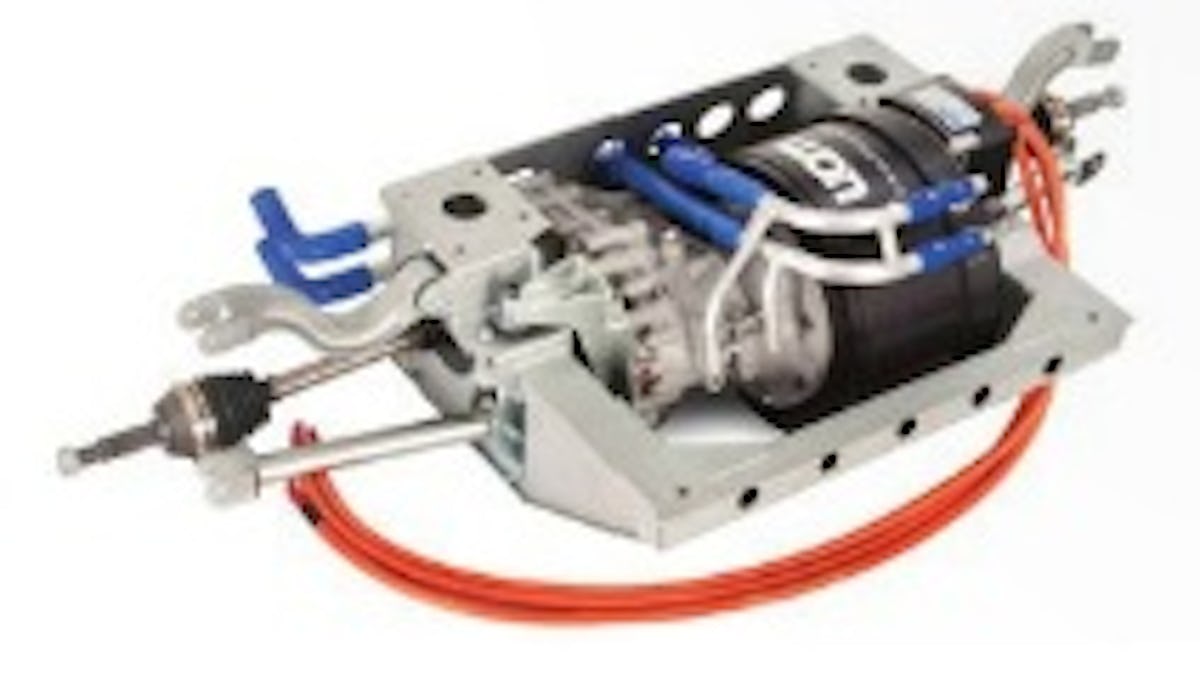 Careful packaging has been necessary to maintain the current forward luggage storage compartment and preserve the existing passenger space, providing capacity for five occupants and wheel chair use. The fuel cell module and heat exchanger are chassis mounted and installed from underneath the vehicle. Packaged into the front of the vehicle is the hydrogen storage tank. At this stage a 350 bar system has been chosen, with a tank capacity of 3.7kg. This pressure rating is compatible with the existing UK hydrogen refuelling facilities and the size of tank sufficient to exceed the 150 mile target range. The installation design has projected for a 700 bar tank, which could be used with higher pressure refuelling stations and would give the vehicle a greater range.
The 400 V, 14k Wh battery back is constructed from lithium polymer cells with a battery management system to monitor the charge and discharge and control the balancing of the cells. Its modular construction allows it to be packaged into the chassis beneath the passenger compartment without raising the floor or causing any reduction in ground clearance.
The drive system is a DC brushless electric motor, with a peak power of 100 kW and a continuous power of 50 kW. This drives the rear wheels through a single speed transmission. Front wheel drive was considered but rejected because of the wheel angle dictated by the turning circle requirements. Direct drive hub motors just on the rear were also considered but without the multiplication factor that gearing gives, hub motors currently on the market could not provide the required torque to enable the taxi to meet its performance targets.
The electric motor and gearbox are housed under the rear floor of the taxi, where the live rear axle is normally located and are mounted on their own subframe. The new powertrain located at the rear of the vehicle has resulted in the development of a new rear suspension for the vehicle and rear brakes.
A fully independent trailing arm and lateral link system has been designed to fit in the package space available without any modifications to the vehicle structure.
Apart from minor revisions to the centre console in the driver's compartment, the interior of the taxi remains unchanged from the standard vehicle. Two in-car displays will be incorporated into the vehicle, one to give the driver information about the electrical systems and a more pictorial display in the passenger compartment informing them of the way the vehicle is operating and displaying the energy it is using.
For more attend Electric Vehicles Land Sea Air USA 2012 where a large number of electric vehicle manufacturers not seen in conventional EV events will present including WheelTug aircraft electrification, MotoVolta, LLC motorbikes, SolTrac farm tractors, , Monterey Bay Aquarium Research Institute AUVs and manufacturers of cars, industrial, commercial, military, e-bike and other EVs.
Also read Electric Buses and Taxis 2011-2021 and Hybrid and Pure Electric Cars 2011-2021
Source and images: Lotus