Wind and solar power at sea

Wind power has been used by ships as a means of propulsion for thousands of years, but with the advent of the steam and internal combustion engines during the Industrial Revolution the use of sail power fell away sharply from around the mid-19th century. Today however there is a resurgent interest in the use of sails for commercial vessels as shipping companies seeks ways to reduce fuel costs and comply with new airborne maritime mission standards. Indeed, some of the sails have solar panels on them that generate enough electricity to work electric motors propelling the craft sideways for berthing, making it something of a hybrid electric vehicle. Kitegen is another approach where a kite is steered in a figure of eight to generate electricity, not to pull the boat along directly.
Traditional flexible sails with rigging are generally not suitable for large commercial ships, however rigid sails could be a practical way to utilise wind power on modern ocean-going vessels in order to lower fuel consumption & reduce noxious gas emissions.
Rigid sails are not a new concept and designs vary widely. In the 1970's & 1980's for example two ships in Japan were fitted with curved rigid sails and in the 1980's Jacques Cousteau, Professor Lucien Malavard and Dr. Bertrand Charrier developed a turbosail which was then fitted to the research ship 'Alcyone'.
Both of these innovative concepts reduced fuel consumption but for a variety of reasons, rigid sails have to date not gained widespread acceptance.
Another renewable energy technology suitable for ships is solar power. Over recent years significant advances have been made in terms of developing solar panels that are lightweight, more efficient and suitable for the harsh marine environment. Already a number of commercial ocean-going ships have been fitted with solar panels such as Nippon Yusen's (NYK) Auriga Leader.
At this stage solar power alone is unable to provide the energy required for propulsion on large ships; however it can be an important alternative source of power for on-board electrical systems thereby helping to reduce fuel consumption and noxious gas emissions.
The challenge for system designers is to develop a solution for ships that can tap into the power of the wind and sun - yet be cost effective, practical and not endanger the crew or vessel.

A combined wind and solar power solution for ships

Unlike land based renewable energy solutions such as solar or wind farms, the area or space available on ships for installing wind & solar power systems is quite limited. Taking this into account it would appear advantageous to develop a system that can use both wind and solar power as energy sources plus harness this energy via the same system.
The Aquarius Marine Renewable Energy (MRE) System being developed by Eco Marine Power will achieve this by using rigid sails and an array of solar panels.
The Aquarius MRE SystemTM (Patent Pending) or Aquarius SystemTM will use this array of rigid sails and solar panels to form a ship based renewable energy system. On large ships up to twenty rigid sails could be installed whereas on smaller vessels just one or two sails would be needed. 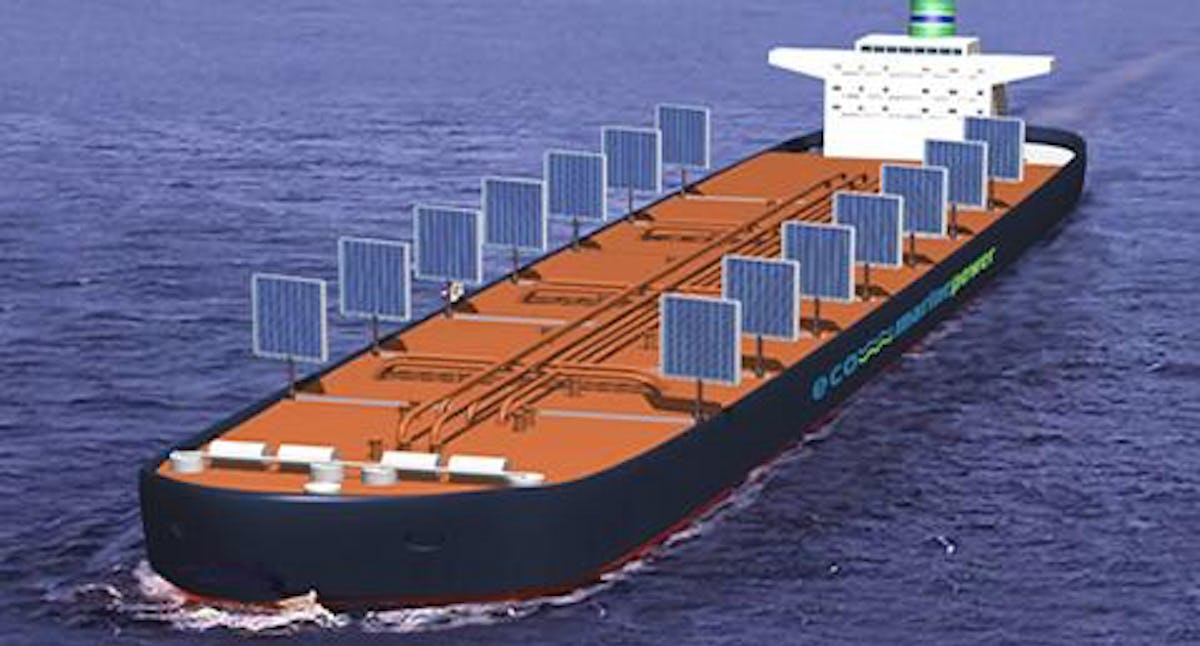 The Aquarius MRE SystemTM is not intended to be a ship's primary source of propulsion. Instead the system is being designed to work alongside other technologies in order to reduce fuel consumption and harmful gas emissions for a variety of ships such as bulk carriers, oil tankers and cargo ships.
Depending on the number, size, shape and configuration of the rigid sails it is estimated that the system will reduce a vessels annual fuel consumption by up to 20%.

Large commercial ships such as bulk carriers and oil tankers operate with a small crew, therefore a renewable energy solution for these types of vessels needs to be automated.
To achieve this, an advanced computer control system is being developed so that the rigid sails will automatically be positioned to best suit the prevailing weather conditions.
The rigid sails can be rotated to best use the available wind or if there is no wind, then the solar panels or cells will be able to collect solar energy during the day. The solar panels could be mounted on the sails or alternatively they could be mounted elsewhere on the ship.
In addition the control system will monitor the performance of the system and provide a means by which the crew can manually control the rigid sails if needed via command consoles. These consoles can be located in a variety of positions on-board the ship.

The computer control system will also include a number of safety features to prevent the sails or ship being damaged.
The Aquarius computer control system will be based on the KEI 3240 Computer System developed by KEI System Ltd of Osaka, Japan. The KEI 3240 Computer System is a highly reliable, marine type approved system that is already in use today. The main computer unit is able to operate in temperatures ranging from +5oC to 55 oC and the local I/O units are able to operate between +5oC to 70 oC. This robustness makes it ideal for ship borne applications.
Each rigid sail will be physically raised, lowered & manoeuvred by a positional system which will interface with the computer control system. The rigid sails will be able to move as an array or individually either automatically as directed by the computer control system, or via manual commands entered by the crew via the control console(s).
Most importantly the positional system will be able to store the rigid sails in a protective housing so that they are not damaged during storms or do not interfere with cargo loading/unloading operations for example.
Another important feature of the Aquarius MRE SystemTM is that it incorporates an advanced energy storage system based on Lithium Ion technology from Corvus Energy Ltd. Of Vancouver, Canada.
Corvus Energy's advanced lithium-polymer battery technology will store energy collected by the solar panels or it can be used to store power generated by the ships generators. The batteries will then help power the ship's electrical equipment or utilized as a power source when the ship is in harbour or at anchor.
When in port, a ship could use the stored energy in the batteries to significantly reduce the amount of fuel required to operate generators in areas where shore power is not available. The batteries could also be used as a power source when the ship is at anchor and will be charged during the day via the solar panels. Using power from the batteries will also satisfy the growing demand at ports to reduce emissions of Green House Gasses (GHG) and particulate matter.
Additionally the power stored in the battery modules could be used as a highly reliable back-up power source.
Each AT6500 series battery module from Corvus Energy has the ability to be combined to form a custom sized pack - from 6.5 kWh to multi-megawatt sized applications. The modules can be configured in any number of ways to build the size of battery pack required and will allow for the energy storage component of the Aquarius MRE SystemTM to be highly flexible.
The AT6500 modules are also inherently safe and capable of being used in the most demanding environments as the modules and the connectors are fully sealed.
Further important features of the battery modules are that they are 99% recyclable, lightweight & require no ongoing maintenance.
At this stage it is planned to incorporate CIS solar module technology into the Aquarius SystemTM because of their performance plus they also comply with European RoHS (Restriction of Hazardous Substances) regulations. However other solar cell technologies are being studied and may also used.
On a large bulk ore carrier the total installed solar power could be 500 kWp or more. However as the cost of solar panels decrease and their efficiency increases, it may become feasible to expand the capacity of the installed solar power towards 1 MWp.
For more attend Electric Vehicles Land Sea Air USA 2012 ,where many marine applications will be aired such as Monterey Bay Aquarium Research Institute and iRobot Corporation Autonomous Underwater Vehicles AUVs and the University of Michigan Unmanned Aerial Vehicle UAV - a plane that lands and takes off from the sea. Uniquely we reflect the new realities that there are now six key enabling technologies and they are competing in all forms of EV, hybrid, pure electric and land, water and airborne, manned and unmanned. Energy harvesting and conservation in all EVs will be covered by two speakers. Lecturers from ten countries detail the situation in their parts of the world including SYNPER 3 from Singapore, first to fly an electric helicopter recently, showing how up to 35% of helicopter crashes could be avoided with hybrid electric technology. Sun Yat-Sen University China and Germany Trade & Invest detail their national situations. Next generation batteries are covered by Robert Bosch (Bosch Group) of Germany, Oxis Energy UK and speakers from Canada and the USA. OLEV Technologies will show how to continuously pick up power and Schneider Electric of France and ECOtality of the USA will explain how modern charging infrastructure - whether for marine or other applications - is a system not a box. See the full picture, with best-in-class speakers from across the whole world - Slovenia to Gibraltar, China to Canada, each carefully chosen by IDTechEx because of their leadership. Other presenters include BMW (cars etc), Mitsubishi Motors (small commercial vehicles and cars), Daimler AG (commercial and military vehicles and cars) and Toyota (leader in electric forklifts, cars, buses but also presenting on its fuel cell vehicle program.) Uniquely, a large number of electric vehicle manufacturers not seen in conventional EV events will present including four on electric motor cycles. Many manufacturers of industrial, commercial, military, cars and other EVs will be there. Come to this event where you avoid the usual speakers with nothing new to say and meet people new and useful to you without doing a lot of travelling to find them. Apply for an award.
Also read Marine Electric Vehicles 2011-2021, Energy Harvesting for Electric Vehicles 2012-2022 and Corvus Energy joins aquarius project.
Source and image: Eco Marine Power