At the forthcoming IDTechEx Electric Vehicles Land Sea Air, iRobot Corporation and Monterey Bay Aquarium Research Institute present on Autonomous Underwater Vehicles AUV in the form of short range, high performance "swimmers". In 2012, four Liquid Robotics "PACX Wave Glider" AUV gliders, which are slower but go much further, set a new distance world record by travelling autonomously almost 6000 kilometers across the Pacific ocean collecting data on water acidity and fish stocks. Their voyage from San Francisco to Hawaii took four months. They are continuing to Japan and Australia. They employ photovoltaics to drive the electronics and a hinging mechanism to use wave power to propel the craft. This is usually achieved by mechanical linkage so they are not technically electric vehicles but competing versions use wave and sun power to charge a traction battery and they are electric vehicles. 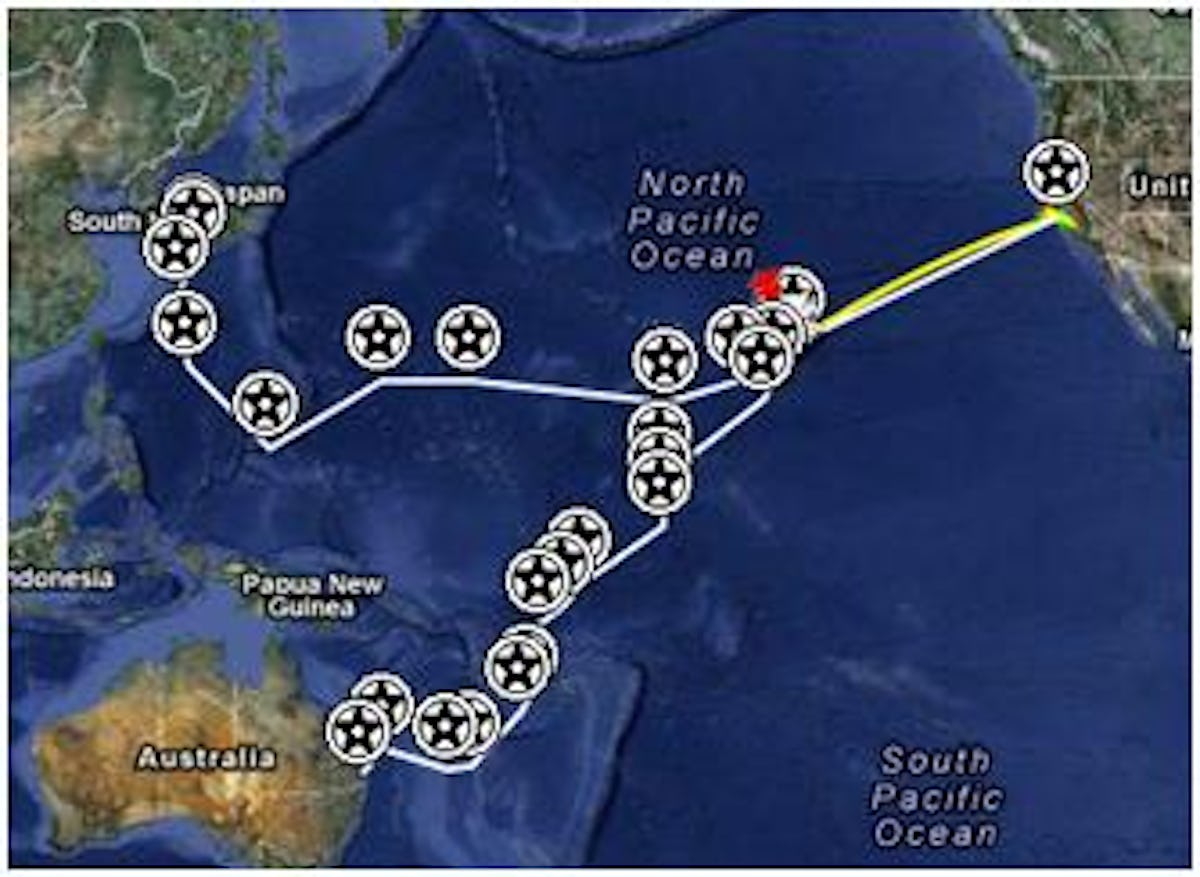 Source NASA
PACX Wave Glider
For more attend Electric Vehicles Land Sea Air USA 2012,where uniquely we reflect the new realities that there are now six key enabling technologies and they are competing in all forms of EV, hybrid, pure electric and land, water and airborne, manned and unmanned. Speakers from ten countries detail the situation in their parts of the world including SYNPER 3 from Singapore, first to fly an electric helicopter recently, showing how up to 35% of helicopter crashes could be avoided with hybrid electric technology. Sun Yat-Sen University China and Germany Trade & Invest detail their national situations. Next generation batteries are covered by Robert Bosch (Bosch Group) of Germany, Oxis Energy UK, IBM USA and others. OLEV Technologies will show how to continuously pick up power, Schneider Electric of France how modern charging infrastructure is a system not boxes. There will be two presentations on supercapacitor breakthroughs - here is the future. See the full picture, with best-in-class speakers from across the whole world - Slovenia to Gibraltar, China to Canada, each carefully chosen by IDTechEx because of their leadership. There are two presentations on agricultural EVs and five on electric aircraft including Boeing and Airbus involvement. Other presenters include BMW (cars etc), Mitsubishi Motors (small commercial vehicles and cars), Daimler AG (commercial and military vehicles and cars) and Toyota (leader in electric forklifts, electric cars and buses but also presenting on its fuel cell vehicle program.) Uniquely, a large number of electric vehicle manufacturers not seen in conventional EV events will present including Mission Motors and two others on electric motor cycles. Many manufacturers of industrial, commercial, military, cars and other EVs will be there. Come to this event where you avoid the usual speakers with nothing fresh to say and meet people new and useful to you without doing a lot of travelling to find them.
Also read Marine Electric Vehicles 2011-2021 and Energy Harvesting for Electric Vehicles 2012-2022.