Wolfgang Fink of the UA department of electrical and computer engineering has developed an autonomous robotic lake lander that could be used to explore this planet and others.

Fink unveiled the lake lander, named Tucson Explorer II, or TEX II, in a paper titled "Robotic Lake Lander Test Bed for Autonomous Surface and Subsurface Exploration of Titan Lakes," which he presented March 8 at an aerospace conference organized by the Institute of Electrical and Electronics Engineers in Big Sky, Mont.
Fink presented TEX II as an autonomous exploration vehicle that potentially could be used to explore the lakes of liquid hydrocarbon known to exist on Saturn's largest moon, Titan.
TEX II is the second vehicle designed by Fink as part of his NASA-award-winning concept of future planetary exploration, which he calls "tier-scalable reconnaissance." The first vehicle was a land-based planetary rover. 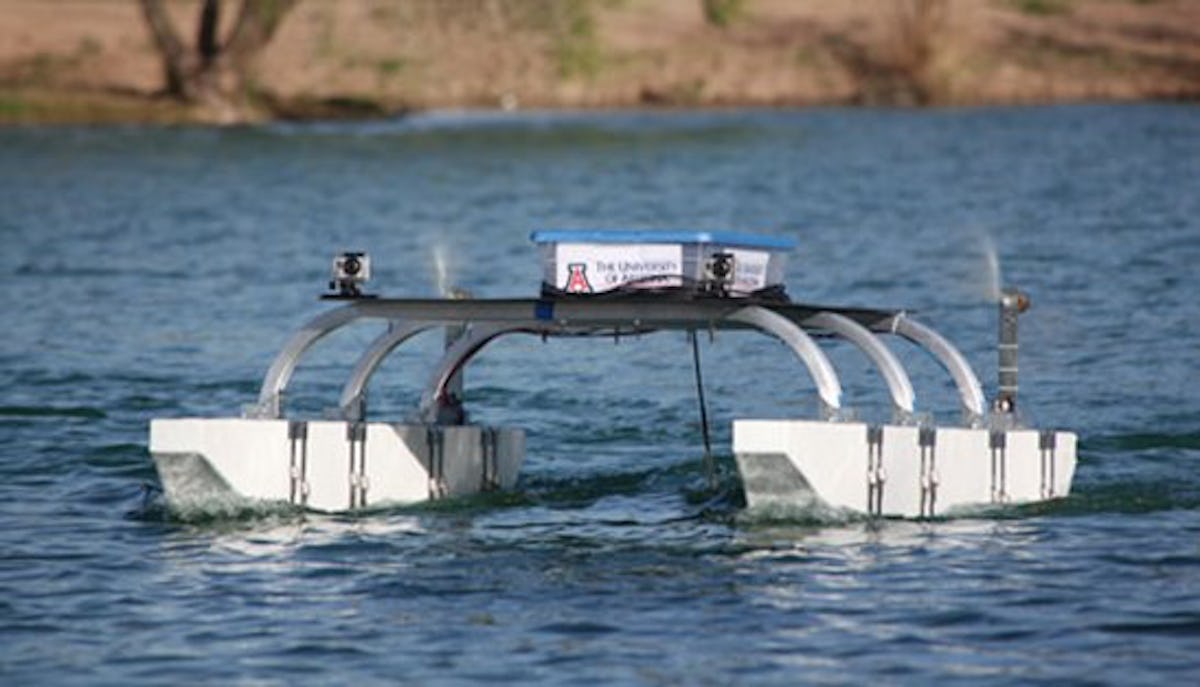 The lake lander TEX II is the latest component of Wolfgang Fink's autonomous planetary exploration fleet.
Fink envisions future planetary research being conducted by a hierarchy of intelligent, autonomous robots that could include satellites, airships or blimps, and a fleet of rovers and lake landers.
His humans-excluded vision is that an orbiting satellite would direct atmospheric blimps to scan potentially interesting areas of a planetary surface. The blimps would then order surface-based rovers and lake landers to investigate geological features in detail and collect samples in situ.
Fink's aim is to endow robots with curiosity. He wants them to want to investigate certain situations and environments, and then learn from those investigations so they can make increasingly smarter choices about where to go and what to investigate next.
A mission to Titan is many years away, but Fink made it clear that TEX II is close to being ready for more earthly duties. Like his planetary rovers, in its current configuration TEX II can be controlled from anywhere in the world via an Internet connection, and will soon be fully autonomous.
"TEX II is ready to deploy on missions related to defense and security, such as harbor surveillance and cleanup operations of littoral munitions dumps and mines," Fink said. It is also ideal for search and rescue operations in oceans, lakes, and hazardous environments, as well as for environmental research projects, he added. 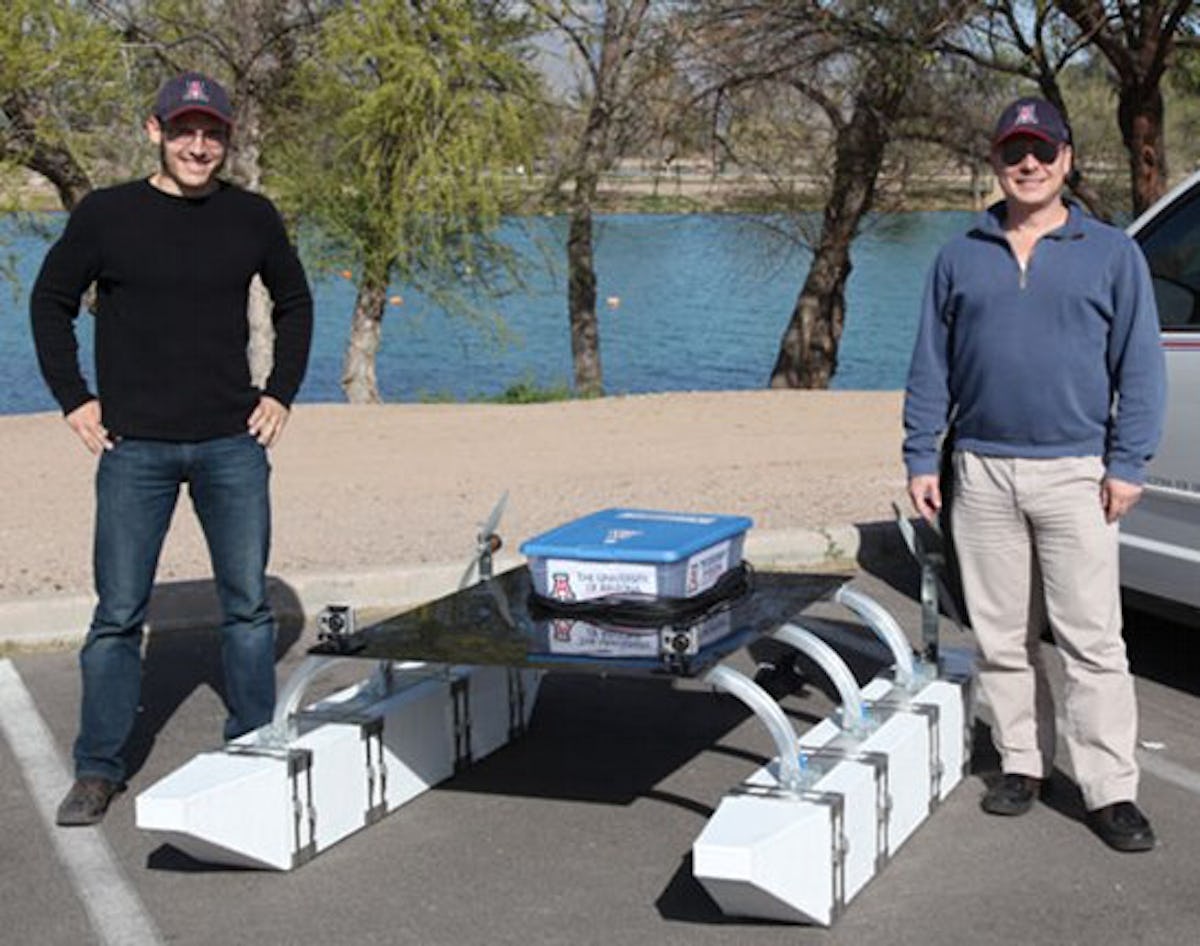 Wolfgang Fink, right, and his ECE grad student Alex Jacobs, prepare to launch TEX II for a series of tests on a lake near Tucson, Ariz.
For example, Tokyo Electric Power acknowledges that cleanup at the Fukushima Daiichi nuclear plant could take 40 years. The sea around the plant is known to contain radioactive elements, and the necessary extensive sampling and monitoring could be achieved more safely and thoroughly with a fleet of autonomous vehicles such as TEX II.
"Another potential application of this lander is oceanographic research into currents and marine pollution," Fink said.
Millions of tons of plastic and other debris are dumped into our oceans every year, and rotating ocean currents known as gyres accumulate this refuse at their center. Dumped plastics can act as a chemical sponge by absorbing and concentrating pollutants, which are ingested by animals and birds and introduced into the food chain.
These accumulations of debris are often referred to as "garbage patches," and a huge amount of oceanographic research remains to determine their size and toxicity, and how big an environmental, indeed existential, threat they pose.
"TEX II is currently fitted with onboard cameras and sonar that can penetrate up to 100 meters," Fink said. Other sensors could be added, he said, to detect pathogens, toxins, explosives, radiation, and so on.
TEX II is highly modular and portable and was designed as a catamaran for enhanced stability and to allow the various onboard sensors easy access to the surface and subsurface of the water, or other liquid, upon which it is deployed. It weighs about 100 pounds and its central raised deck can carry a 150-pound payload of computers, batteries and sensors. The twin hulls are each 6 feet long and set about 5 feet apart.
Air-propellers mounted at the back of each hull are powered by electric motors that can switch rotational direction to drive TEX II backward or forward, which makes the craft highly agile and maneuverable: For example, TEX II can pivot in position, which no single-engine water craft can do.
The propellers are set as far apart as possible so they deliver maximum torque to the chassis during turning. "Top speed depends on the size of the motors attached,"Fink said. "But the important point is that sonar works best at speeds up to 5 knots."
The shallow draft of the fortified Styrofoam hulls decreases perturbation in the water around TEX II, which minimizes interference with subsurface telemetry from the onboard sensors.
The entire chassis and sensor deck can be decoupled from the catamaran hulls and attached to an alternative propulsion system.
The Styrofoam hulls of TEX II have a significant advantage over other hull types -- inflatable hulls, for example -- in that they can sustain hull damage without jeopardizing buoyancy.
Fink is an associate professor in the UA department of electrical and computer engineering and the department of biomedical engineering. He holds the Edward and Maria Keonjian Endowed Chair in the UA College of Engineering, and directs the Visual and Autonomous Exploration Systems Research Laboratory. Fink is a fellow of the American Institute for Medical and Biological Engineering, and holds joint appointments in the UA departments of systems and industrial engineering, and ophthalmology and vision science.
• Robotic Lake Lander Test Bed for Autonomous Surface and Subsurface Exploration of Titan Lakes, by Wolfgang Fink, Markus Tuller, Alexander Jacobs, Ramaprasad Kulkarni, Mark A. Tarbell, Roberto Furfaro, and Victor R. Baker. Published in IEEE Aerospace Conference Proceedings, paper #1285; Big Sky, Montana, 2012.
Source: University of Arizona
For more attend Electric Vehicles Land Sea Air USA 2012,where Phoenix International - A John Deere Company (leader in agricultural vehicles), BMW (cars etc), Mitsubishi Motors (small commercial vehicles and cars), Daimler AG (commercial and military vehicles and cars) and Toyota (leader in electric forklifts, cars, buses) will present. Uniquely, a large number of electric vehicle manufacturers not seen in conventional EV events will present including WheelTug airliner electrification on the ground, Pipistrel manned electric aircraft, University of Michigan unmanned solar aircraft, SolTrac electric farm tractors, Monterey Bay Aquarium Research Institute Autonomous Underwater Vehicles AUVs. Many manufacturers of industrial, commercial, military, e-bike, cars and other EVs will be there. At last you can meet those responsible for the majority of the hybrid and pure electric vehicle market and they all need components!! Most are prosperous growing businesses not reliant on government support that can be withdrawn at any time.
IDTechEx have published 18 in-depth reports on the EV industry offering ten year forecasts, analysis and case studies. See www.IDTechEx.com/research for more information.