Hitachi announced a 11kW highly efficient permanent magnet synchronous motor co-developed with Hitachi Industrial Equipment Systems Co., Ltd., without using magnetic material containing rare-earth metals such as neodymium and dysprosium. The motor employs an iron-based amorphous metal(1) in the core, the heart of the motor.
In 2008, Hitachi and Hitachi Industrial Equipment Systems established basic technology for a raremetal-free motor. In order to further increase capacity and efficiency, technologies such as structural optimization and loss minimization for the core were developed, and applied to realize a medium capacity 11kW motor. In comparison to conventional motors of the same class, the motor developed is smaller and achieves an energy efficiency of approx. 93％ which fulfills the highest standard of IE4(2) in the efficiency guideline set out by the International Electrotechnical Commission (IEC). Technology development will be pursued with view to product launch in FY2014.
A part of this work was supported by The New Energy and Industrial Technology Development Organization (NEDO), Japan as part of its support program for the development of practical technology to substitute or reduce rare metals.
In recent years, as part of the increasing social awareness of environmental issues such as global warming, there has been a growing interest in technology that increases the efficiency of electrical equipment and conserves energy. Although greater efficiency of motors using rare-metal magnets is also being pursued, there is a growing need to recycle the rare-metals or to replace them with substitute materials from the standpoint of dwindling resources.
In response to this need, Hitachi and Hitachi Industrial Equipment Systems, employed amorphous magnetic metal in the core and developed basic technology for an axial gap motor which raises motor efficiency without a magnet containing rare-metals, resulting in a prototype small capacity 150W class motor in 2008. To achieve higher capacity and efficiency levels, however, the development of a highly resilient motor structure and material to reduce energy loss are necessary. Thus, Hitachi and Hitachi Industrial Equipment Systems developed technology to optimize the structure of the axial gap motor to efficiently use low-magnetic ferrite material and a stratified core structure which efficiently draws out the low-energy loss characteristic of the amorphous metal, to achieve an industrial 11kW highly efficient permanent magnet synchronous motor without rare metals.
Features of the technology developed are as below :
(1) Increasing the capacity of double-rotor axial gap motors
In order to employ the double rotor axial gap motor which allows a greater amount of ferrite magnet to be used and thus dramatically increase the magnetic energy of the magnet, highly resilient stator and rotor structures which could endure a large torque and centrifugal force were developed. As a result, increased efficiency was achieved in energy-consuming medium capacity 11kW motors used in industrial applications as well as realizing the development of a motor without rare-metal magnets.
(2) Decreasing core loss using "stratified core structure"
A "stratified core structure" which uses low-loss material such as iron-based amorphous metal with loss characteristics, approx. 1/10 that of magnetic sheet material used in conventional motors in the stator core of the motor, and the production technology for the new core structure were developed. As a result, deterioration due to processing(3) which occurs in low-loss material such as iron-based amorphous metals was improved, making it relatively easier to manufacture a low-loss core.
(3) Motor design optimization technology
Three-dimensional magnetic field analysis and three dimensional thermal analysis technologies were developed for a double rotor axial gap motor by taking characteristics analysis of ferrite magnet rotors and amorphous stratified cores into account. Using the analysis technologies developed, an 11kW capacity industrial permanent magnet synchronous motor was designed and the prototype machine was built to verify the high efficiency of the motor resulting in the realization of a smaller size motor with high efficiency conforming to the IE4 standard of the IEC guideline. 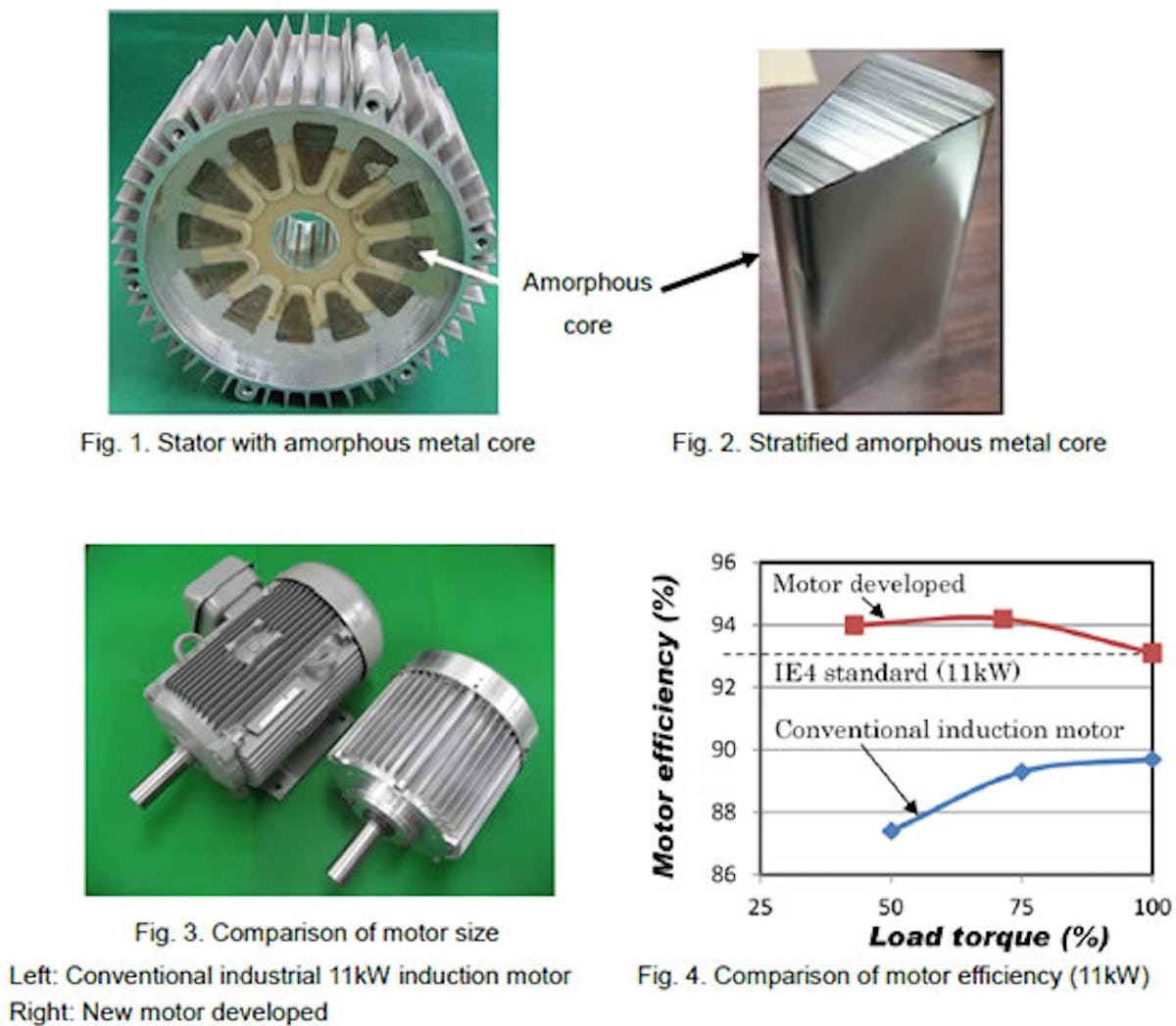