The US Coast Guard Sea Eagle, the Ultra Green Homeland Security vessel that's tough on the bad guys, but kind to the Ecology is the first Coast Guard Cutter to provide extensive surveillance, on , above and below the ocean.
The E Class Search and Rescue Sea Eagle with Helipad and underwater ROV (Remote Ocean Vehicle) uses less than half as much fuel to go 10% faster than the USCG Sentinel Class Fast Response Cutters' in use today. At the Same time The Sea Eagles waterjet propulsion, dynamic positioning and small wave making signature do far less harm to Marine Ecology.
Instead of the Sentinels 11,500 hp from tier 2 diesel engines, the analogous Sea Eagle uses a total of 5,000 hp from Solar Hybrid power sources that include cleaner MTU tier 4i Diesels. With less than half the fuel consumption of the Sentinel Class FRC's, the Sea Eagle delivers a maximum speed of 32 as opposed to 29 knots due to the greater overall efficiency of hi-speed Catamarans versus mono-hulls.
In silent electric mode the SEA Eagle will navigate inland water ways and dock with Zero emissions. Plugged in her solar cells can harness and return over 200 MWs of energy to the grid a year, enough power to offset 3,000 NM of Carbon Neutral cruising at 18 knots. As a Certified Carbon Offset Project this state of the art E Class Coast Guard Cutter can reduce GHG emissions by 12,000 tons per year.
Energy from the grid or captured from her 100 kW solar array is stored in a Lloyds approved Corvus 2 MW Lithium UPS. The 16 ton weight of the batteries also serves as the Mass in the MDR (Motion Damping Regeneration) system that acting like a TMD (Tuned Mass Damper) in a skyscraper will generate electricity as it dampens the motion of the vessel.
Combining the MDR with the self leveling T-Foils in each hull greatly improves the ride and the level of safety in many operations at sea. At the same time it also enhances the accuracy of the stabilized remotely operated 25 mm chain gun, and the four crew operated .50 caliber machine guns.
The Coast Guard Sea Eagle FRC can accommodate more than 30 crew members and like all USCG Fast Response Cutter's her command, control, communications, intelligence, surveillance and reconnaissance (C4ISR) system will be fully interoperable with those of the Department of Defense and the Department of Homeland Security.
Government Agencies like the Department of Defense and the Department of Homeland Security while protecting us can also play a major roll in protecting our way of life for future generations. They have the opportunity, if not a duty to do this by insuring that only the best examples of fuel efficient Eco Conscious Vessels are to be found in our Coast Guard and Navy.
The E Class Sea Eagle as such a vessel is being submitted for review under the US Coast Guard Unsolicited Proposal Program. 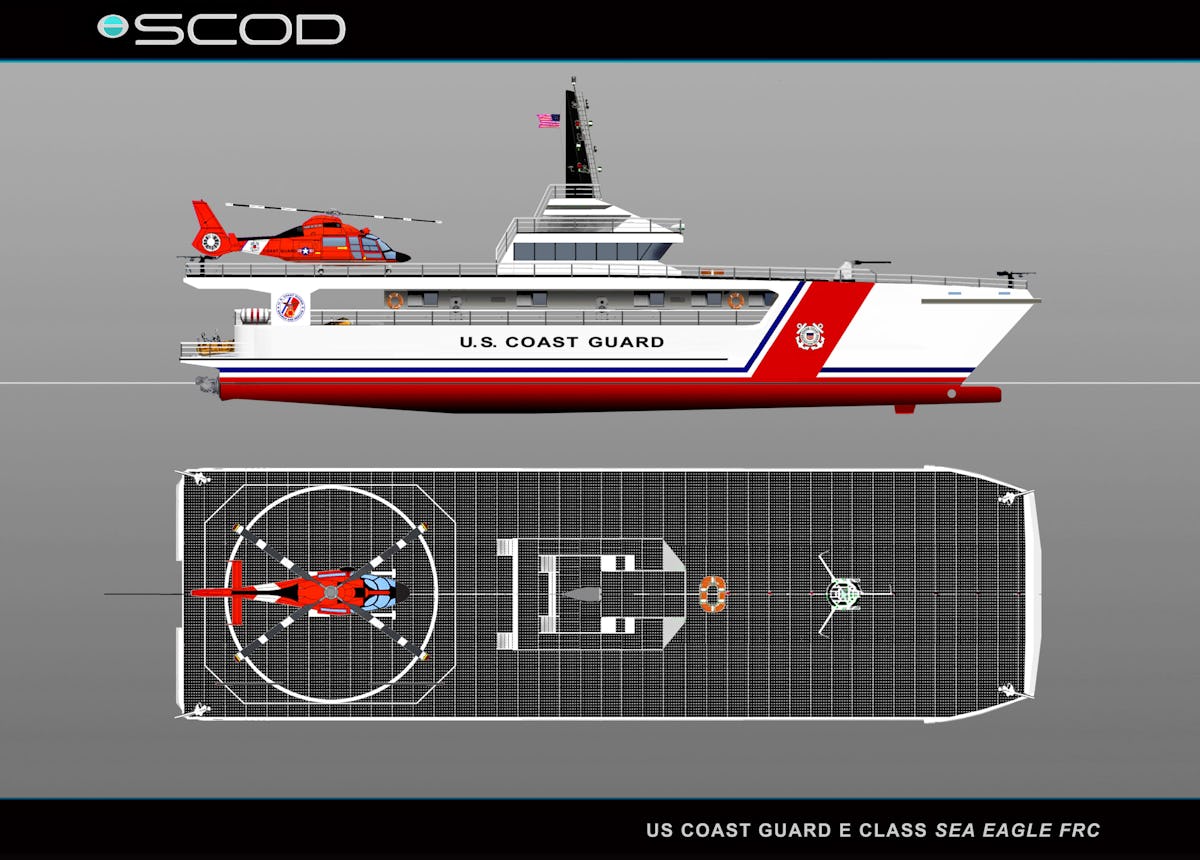