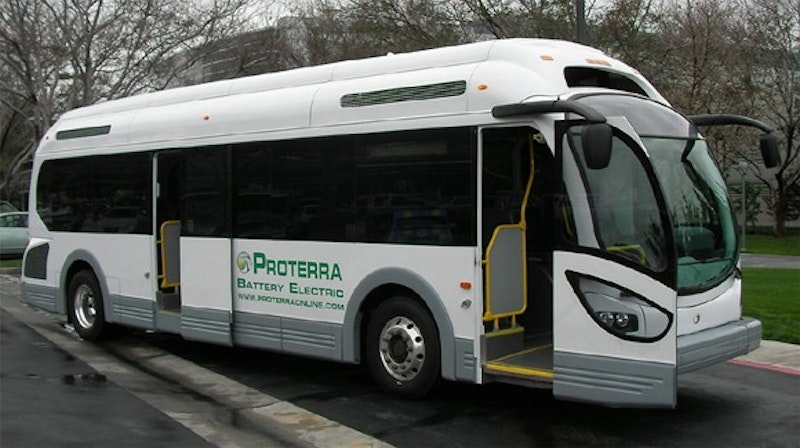 GM Ventures, the venture capital arm of General Motors Co. created in 2010, has invested for the second time in Proterra, a company that makes a battery-electric, fast-charge bus.
GM Ventures and six other companies invested a total of $23 million in a new round of financing for Proterra, the bus manufacturer said Tuesday. GM Ventures' investment was not disclosed. Other investors included new partners Hennessey Capital Management LLC and NMT Capital, plus existing investors Kleiner Perkins Caufield & Byers, Mitsui & Co. Global Investment Inc., 88 Green Ventures and Vision Ridge Partners.
Proterra plans to use the new cash infusion to grow delivery of its battery-electric EcoRide buses to new customers and markets. The EcoRide can complete a fast charge in 10 minutes and has up to 40 miles of range. Proterra said it has seven transit authority customers, up from two over the past 18 months.
In 2011, GM's venture capital arm invested $6 million into Proterra, as part of $30 million Proterra raised.
GM Ventures, which invests in startup companies developing auto-related technologies, is focusing its investments in five areas: automotive cleantech such as batteries or motors; connected-vehicle devices such as voice recognition or integrating personal devices into a car; advanced materials such as for weight savings; sensors, processors and memory that help aid in things such as autonomous driving; and manufacturing technologies that improve efficiency and productivity.
GM on Tuesday declined to provide how many companies GM Ventures has invested in, or how much of its $100 million in funding it has infused into the companies. In June 2011, The Detroit News reported GM Ventures had spent $36 million.
"We haven't had an exit yet," Jon Lauckner, GM's chief technology officer and president of GM Ventures said last week, referring to an exit as a portfolio company being acquired or going through an initial public offering of stock. "Hopefully we'll get an exit in the not-to-distant future."
Lauckner said it's possible one of its first exits could be Powermat Technologies, an Israel-based firm working to develop technology so drivers could charge cellphones and other like-devices by placing them on a charging mat. GM Ventures said in January 2011 it had invested $5m in Powermat.
For more read Electric Buses and Taxis 2012-2022.