Longest cycle life reported so far for any lithium-sulfur battery.

Researchers at the U.S. Department of Energy's Lawrence Berkeley National Laboratory (Berkeley Lab) have demonstrated in the laboratory a lithium-sulfur (Li/S) battery that has more than twice the specific energy of lithium-ion batteries and that lasts for more than 1,500 cycles of charge-discharge with minimal decay of the battery's capacity. This is longest cycle life reported so far for any lithium-sulfur battery.
Demand for high-performance batteries for electric and hybrid electric vehicles capable of matching the range and power of the combustion engine encourages scientists to develop new battery chemistries that could deliver more power and energy than lithium-ion batteries, currently the best performing battery chemistry in the marketplace.
For electric vehicles to have a 300-mile range, the battery should provide a cell-level specific energy of 350 to 400 Watt-hours/kilogram (Wh/kg). This would require almost double the specific energy (about 200 Wh/kg) of current lithium-ion batteries. The batteries would also need to have at least 1,000, and preferably 1,500 charge-discharge cycles without showing a noticeable power or energy storage capacity loss.
"Our cells may provide a substantial opportunity for the development of zero-emission vehicles with a driving range similar to that of gasoline vehicles." says Elton Cairns, of the Environmental Energy Technologies Division (EETD)
The results were reported in the journal Nano Letters, in a paper authored by Min-Kyu Song (Molecular Foundry, Berkeley Lab), Yuegang Zhang (Suzhou Institute of Nano-Tech and Nano-Bionics, Chinese Academy of Sciences) and Cairns (Environmental Energy Technologies Division, Berkeley Lab). The research was funded by the U.S. Department of Energy's Office of Science, Basic Energy Sciences, and a University of California Proof of Concept Award.
Benefits of lithium sulfur, and challenges
"The lithium-sulfur battery chemistry has attracted attention because it has a much higher theoretical specific energy than lithium-ion batteries do," says Cairns. "Lithium-sulfur batteries would also be desirable because sulfur is nontoxic, safe and inexpensive," he adds. Li/S batteries would be cheaper than current Li-ion batteries, and they would be less prone to safety problems that have plagued Li-ion batteries, such as overheating and catching fire.
Development of the lithium-sulfur battery also has its challenges. During discharge lithium polysulfides tend to dissolve from the cathode in the electrolytes and react with the lithium anode forming a barrier layer of Li2S. This chemical degradation is one reason why the cell capacity begins to fade after just a few cycles.
Another problem with Li/S batteries is that the conversion reaction from sulfur to Li2S and back causes the volume of the sulfur electrode to swell and contract up to 76 percent during cell operation, which leads to mechanical degradation of the electrodes. As the sulfur electrode expands and shrinks during cycling, the sulfur particles can become electrically isolated from the current collector of the electrode.
Holistic cell design addresses chemical and mechanical degradation
The prototype cell designed by the research team uses several electrochemical technologies to address this array of problems. The cathode is composed of sulfur-graphene oxide (S-GO), a material developed by the team that can accommodate the volume change of the electrode active material as sulfur is converted to Li2S on discharge, and back to elemental sulfur on recharge.
To further reduce mechanical degradation from the volume change during operation, the team used an elastomeric binder. By combining elastomeric styrene butadiene rubber (SBR) binder with a thickening agent, the cycle life and power density of the battery cell increased substantially over batteries using conventional binders.
(Read an article from earlier this year.)
To address the problem of polysulfide dissolution and the chemical degradation the research team applied a coating of cetyltrimethyl ammonium bromide (CTAB) surfactant that is also used in drug delivery systems, dyes, and other chemical processes. CTAB coating on the sulfur electrode reduces the ability of the electrolyte to penetrate and dissolve the electrode material.
Furthermore, the team developed a novel ionic liquid based electrolyte. The new electrolyte inhibits polysulfides dissolution and helps the battery operate at a high rate, increasing the speed at which the battery can be charged up, and the power it can deliver during discharge. The ionic liquid-based electrolyte also significantly improves the safety of the Li-S battery, as ionic liquids are non-volatile and non-flammable.
The battery initially showed an estimated cell-specific energy of more than 500 Wh/kg and it maintained it at >300 Wh/kg after 1,000 cycles—much higher than that of currently available lithium-ion cells, which currently average about 200 Wh/kg.
"It's the unique combination of these elements in the cell chemistry and design that has led to a lithium-sulfur cell whose performance has never been achieved in the laboratory before—long life, high rate capability, and high cell-level specific energy," says Cairns.
The team is now seeking support for the continuing development of the Li/S cell, including higher sulfur utilization, operation under extreme conditions, and scale-up. Partnerships with industry are being sought.
The next steps in the development are to further increase the cell energy density, improve cell performance under extreme conditions, and scale up to larger cells.
"A long-life, high-rate lithium/sulfur cell: a multifaceted approach to enhancing cell performance," in Nano Letters, by Min-Kyu Song (Molecular Foundry, Berkeley Lab), Yuegang Zhang (Suzhou Institute of Nano-Tech and Nano-Bionics, Chinese Academy of Sciences) and Cairns (Environmental Energy Technologies Division, Berkeley Lab). 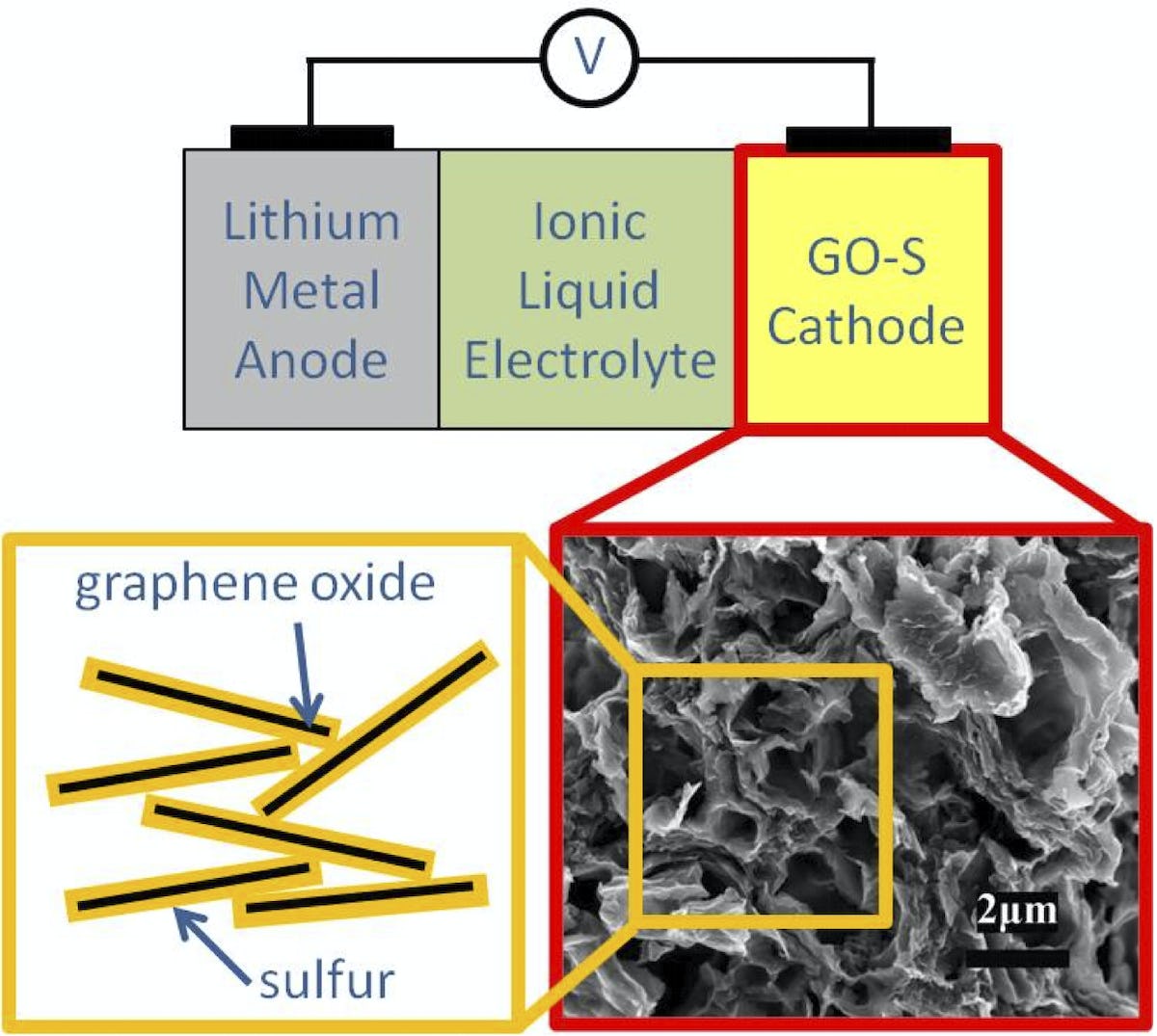