Hyundai introduces their fuel cell vehicle to US market

Hyundai will introduce its Tucson Fuel Cell vehicle to the US market in the spring for just $499 per month, including unlimited free hydrogen refueling.
The Hyundai Tucson will initially be offered to customers in the Los Angeles/Orange County region for $499 per month for a 36-month term, with a $2,999 down payment which includes free hydrogen refuelling and courtesy car when being serviced.
While battery electric vehicle (BEV) technology continues to improve and provides a viable alternative for some, its range and inherent slow-charge limitations means it will only meet the needs of a distinct subset of car buyers. Hydrogen fuel cells promise something more - with both the range and fast-fill characteristics of today's internal combustion engine (ICE), and the zero-emission advantages of BEVs. It's generally thought that ICE, BEV, and hydrogen Fuel Cell Electric Vehicle (FCEV) propulsion technologies will continue to co-exist for some time, meeting different buyer needs.
The Tucson Fuel Cell provides:
"We are less interested in high sales volume in the first few years of this technology than we are in absolutely delighting the first owners of the Next Generation of Electric Vehicles. This is a marathon, not a sprint, and while we want to lead the pack with a strong FCEV start, we'll be pacing ourselves to the infrastructure that is being developed in parallel with our launch," said the company in a recent statement.
California approved a plan in October 2013 to develop up to 100 hydrogen refueling stations in the state over the next several years. This recent California initiative dovetails with increased government support of hydrogen infrastructure development at the federal level, such as H2USA.
Hyundai's fuel cell effectively replaces the battery pack used in an electric vehicle by generating electricity from hydrogen through an electrochemical process that does not involve hydrogen combustion, with no moving parts within the fuel cell stack. 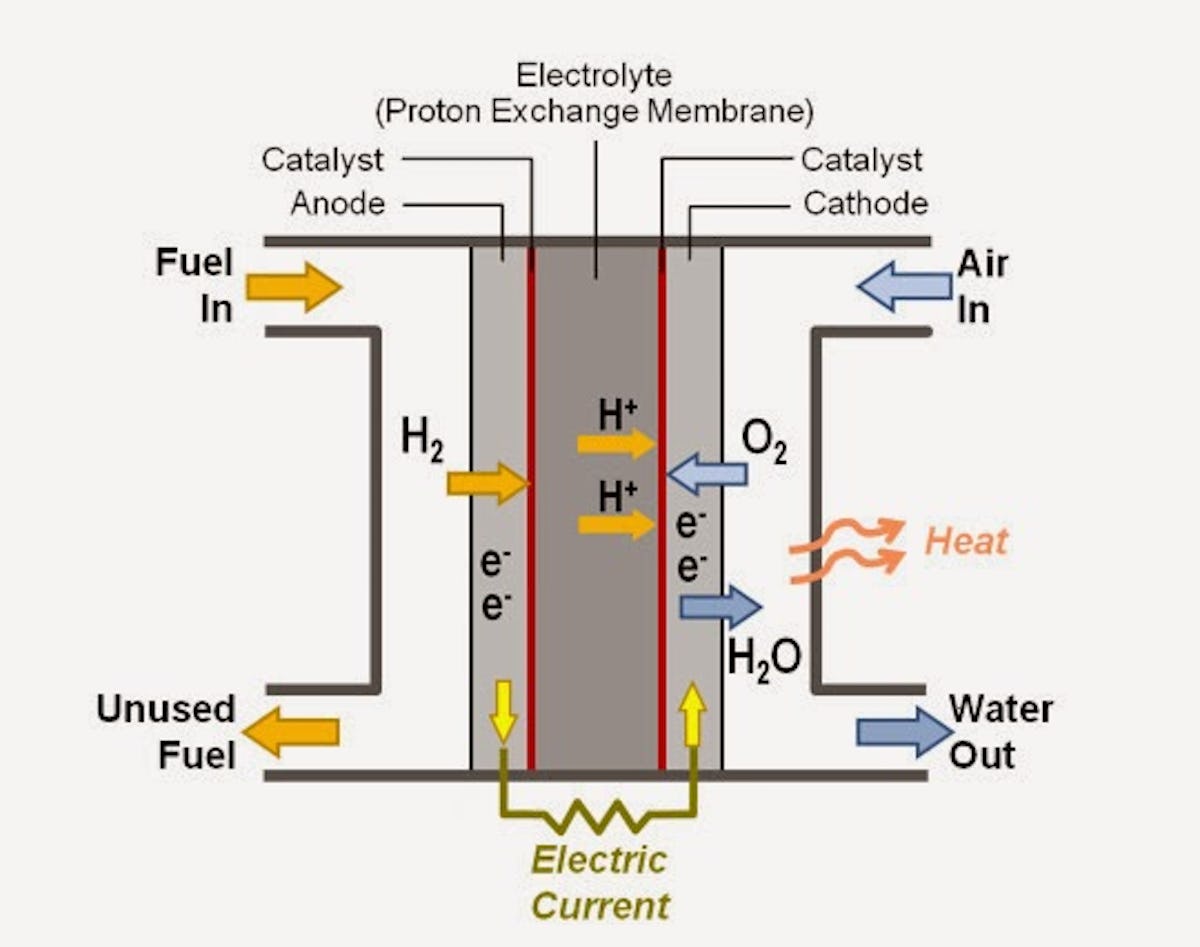 The fuel cell electrochemical process is as follows:
•Hydrogen enters the anode; air (oxygen) enters the cathode
•Catalyst splits the hydrogen electrons and protons
•Electrolyte conducts the positively-charged ions while blocking the electrons
•Electrons are used to create an external circuit, generating electricity
•Catalyst combines the hydrogen ions and electrons with oxygen to create water and heat energy
•A single fuel cell produces approximately one volt; fuel cells are "stacked" to meet voltage requirements
Hyundai's prototype vehicles rely on hydrogen generated at the Orange County Sanitation District near its Fountain Valley headquarters, where methane from sewage is turned into hydrogen. Hydrogen can be sourced directly from water, using electrolysis to split hydrogen molecules with electricity from renewable sources such as wind and solar.
Mass production of the fuel cell vehicles for the U.S. market will begin in February 2014 at the Ulsan, Korea assembly plant that also manufactures the Tucson gasoline-powered CUV.
For more on the subject read Hydrogen and Fuel Cells 2014-2025: Forecasts, Technologies, Markets.