Inventor Nikola Tesla imagined the technology to transmit energy through thin air almost a century ago, but experimental attempts at the feat have so far resulted in cumbersome devices that only work over very small distances. But now, Duke University researchers have demonstrated the feasibility of wireless power transfer using low-frequency magnetic fields over distances much larger than the size of the transmitter and receiver. 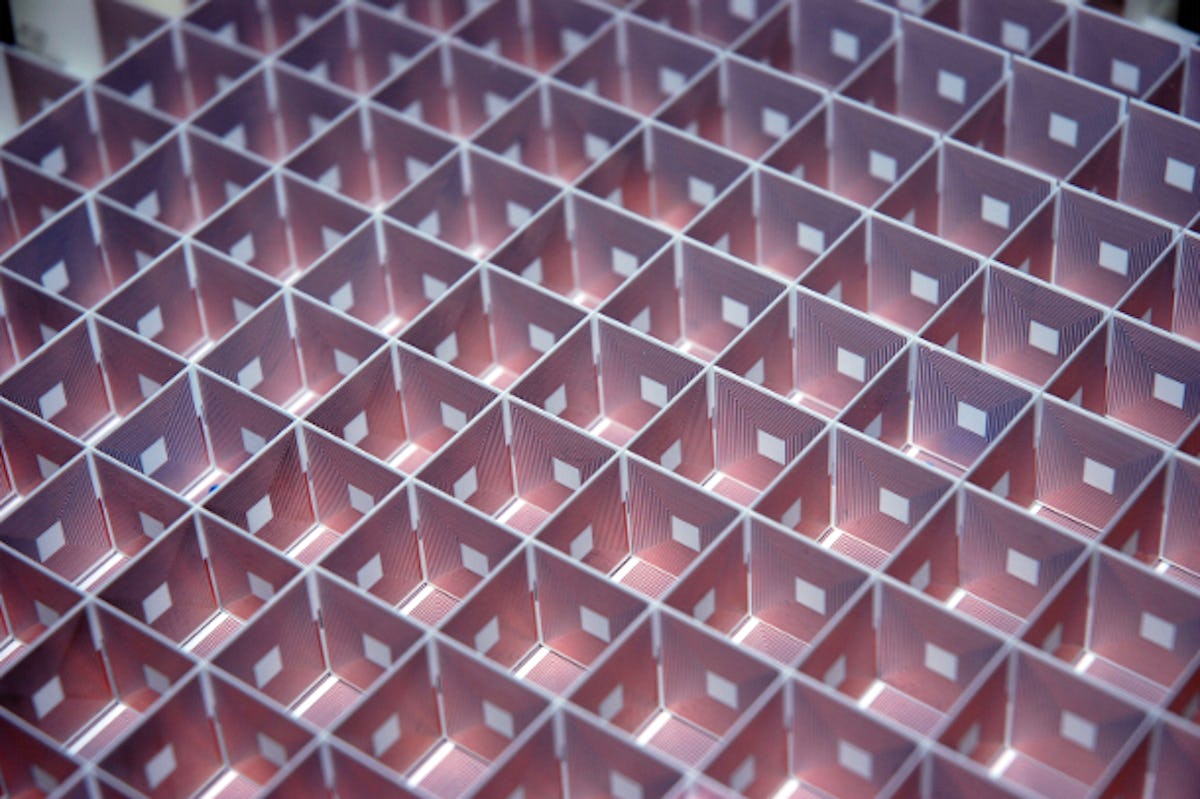 Each side of each constituent cube of the "superlens" is set with a long, spiraling copper coil. The end of each coil is connected to its twin on the reverse side of the wall. Credit courtesy of Guy Lipworth, graduate student researcher at Duke University
The advance comes from a team of researchers in Duke's Pratt School of Engineering, who used metamaterials to create a "superlens" that focuses magnetic fields. The superlens translates the magnetic field emanating from one power coil onto its twin nearly a foot away, inducing an electric current in the receiving coil.
The experiment was the first time such a scheme has successfully sent power safely and efficiently through the air with efficiency many times greater than what could be achieved with the same setup minus the superlens.
The results, an outcome of a partnership with the Toyota Research Institute of North America, appear online in Nature Scientific Reports on Jan. 10. 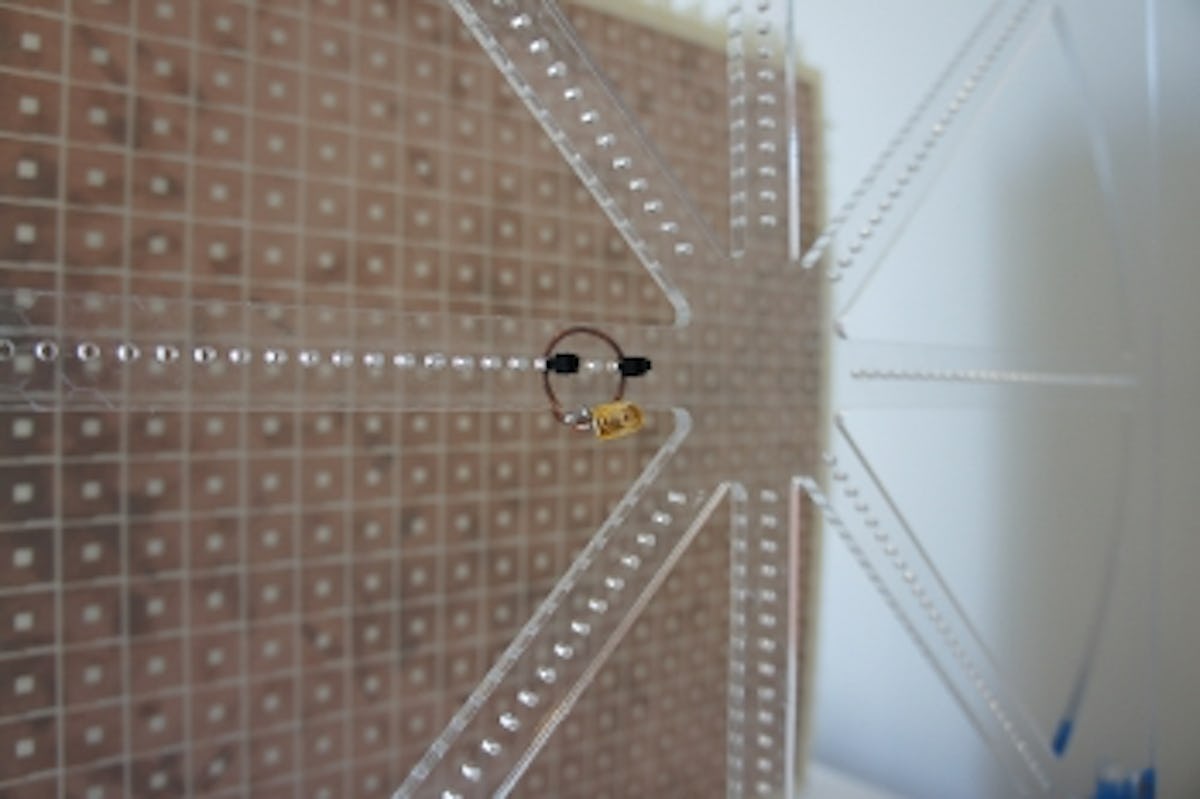 This small copper coil and its twin were used in the experiment to send and receive power using electromagnetic fields. In the background is the metamaterial "superlens" that dramatically increased the power transfer's range. Credit courtesy of Guy Lipworth and Joshua Ensworth, graduate student researchers at Duke University.
"For the first time we have demonstrated that the efficiency of magneto-inductive wireless power transfer can be enhanced over distances many times larger than the size of the receiver and transmitter," said Yaroslav Urzhumov, assistant research professor of electrical and computer engineering at Duke University. "This is important because if this technology is to become a part of everyday life, it must conform to the dimensions of today's pocket-sized mobile electronics."
In the experiment, Yaroslav and the joint Duke-Toyota team created a square superlens, which looks like a few dozen giant Rubik's cubes stacked together. Both the exterior and interior walls of the hollow blocks are intricately etched with a spiraling copper wire reminiscent of a microchip. The geometry of the coils and their repetitive nature form a metamaterial that interacts with magnetic fields in such a way that the fields are transmitted and confined into a narrow cone in which the power intensity is much higher.
On one side of the superlens, the researchers placed a small copper coil with an alternating electric current running through it, which creates a magnetic field around the coil. That field, however, drops in intensity and power transfer efficiency extremely quickly, the further away it gets.
"If your electromagnet is one inch in diameter, you get almost no power just three inches away," said Urzhumov. "You only get about 0.1 percent of what's inside the coil." But with the superlens in place, he explained, the magnetic field is focused nearly a foot away with enough strength to induce noticeable electric current in an identically sized receiver coil.
Urzhumov noted that metamaterial-enhanced wireless power demonstrations have been made before at a research laboratory of Mitsubishi Electric, but with one important caveat - the distance the power was transmitted was roughly the same as the diameter of the power coils. In such a setup, the coils would have to be quite large to work over any appreciable distance.
"It's actually easy to increase the power transfer distance by simply increasing the size of the coils," explained Urzhumov. "That quickly becomes impractical, because of space limitations in any realistic scenario. We want to be able to use small-size sources and/or receivers, and that's what the superlens enables us to do." 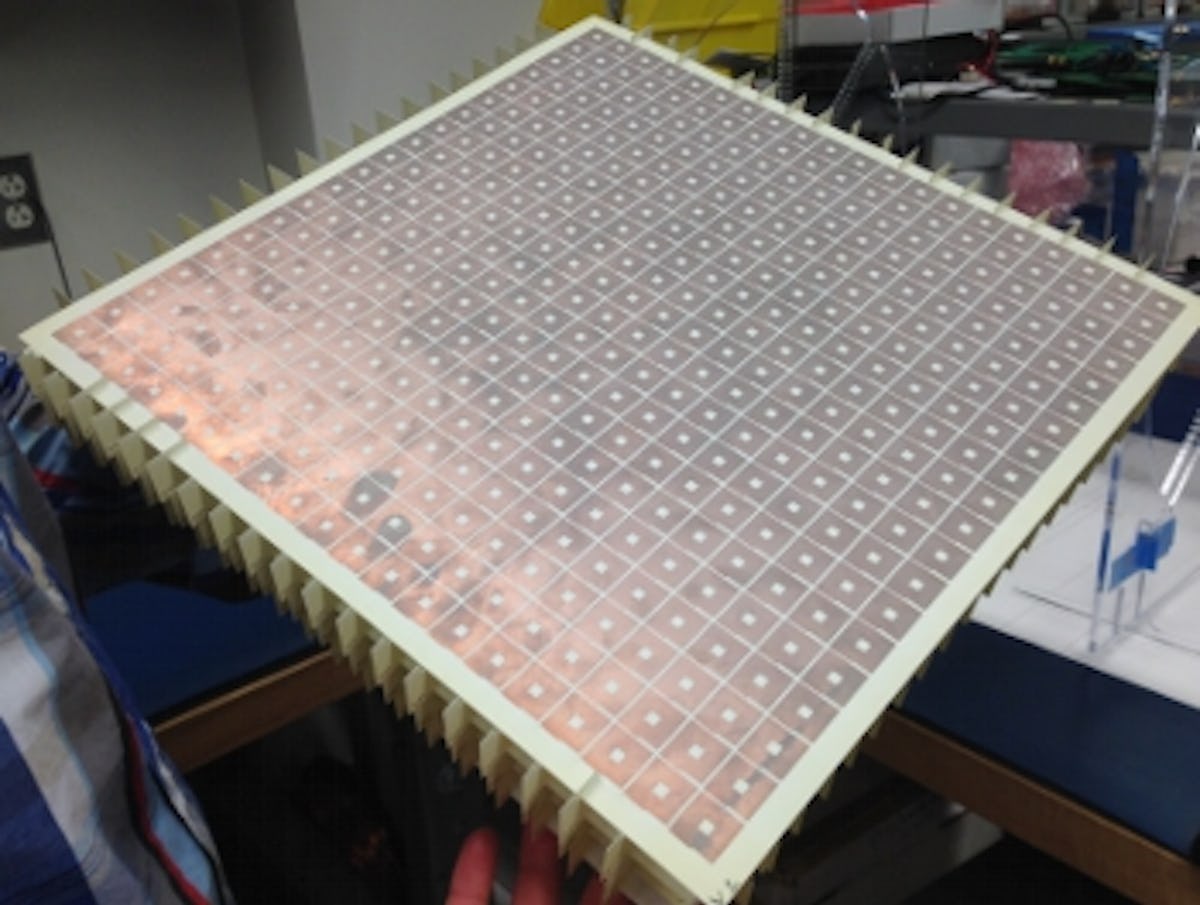 A closer look at the metamaterial "superlens" that beams electromagnetic fields to increase the range of wireless power transfers. The squares are actually long coils of copper wire reminiscent of the surface of a microchip. Credit courtesy of Duke University.
Another trivial way to increase the power in the wireless receiver is, of course, to simply crank up the power. While this is practical to an extent, at high enough powers the fields would start trying to yank the watch off of your wrist. Despite this limitation, however, Urzhumov said that magnetic fields have distinct advantages over the use of electric fields for wireless power transfer.
"Most materials don't absorb magnetic fields very much, making them much safer than electric fields," he said. "In fact, the FCC approves the use of 3-Tesla magnetic fields for medical imaging, which are absolutely enormous relative to what we might need for powering consumer electronics. The technology is being designed with this increased safety in mind."
Going forward, Urzhumov wants to drastically upgrade the system to make it more suitable for realistic power transfer scenarios, such as charging mobile devices as they move around in a room. He plans to build a dynamically tunable superlens, which can control the direction of its focused power cone. 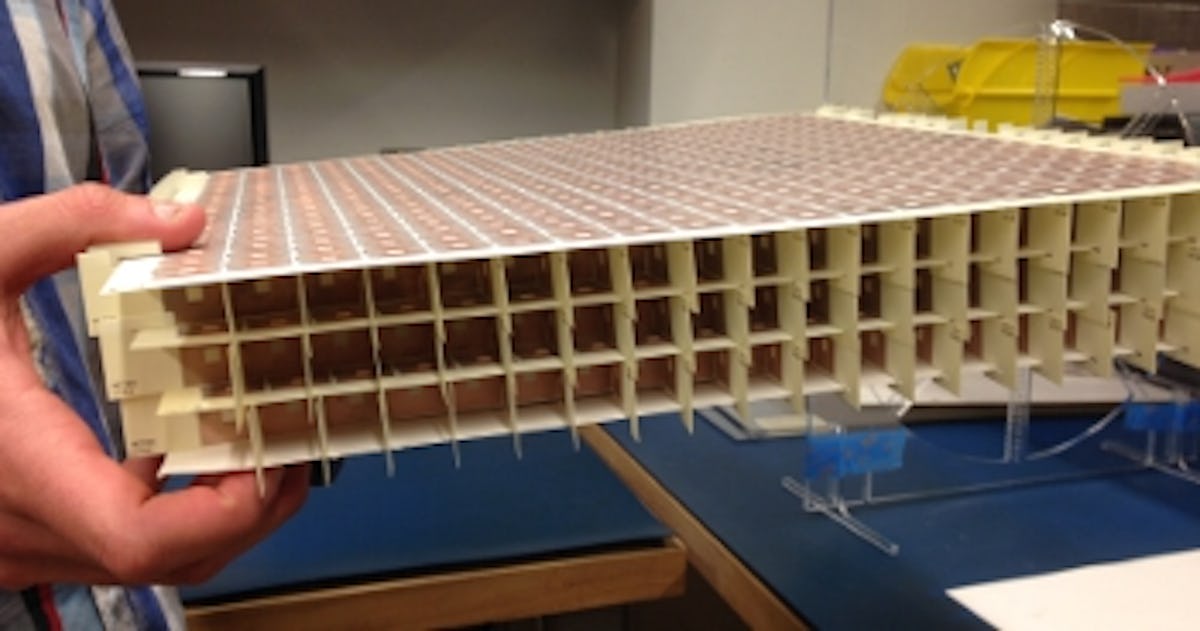 A side view of the metamaterial "superlens." Both its width and thickness affects how far it can boost the wireless transfer of power using electromagnetic fields. Credit courtesy of Duke University.
"The true functionality that consumers want and expect from a useful wireless power system is the ability to charge a device wherever it is - not simply to charge it without a cable," said Urzhumov. "Previous commercial products like the PowerMat™ have not become a standard solution exactly for that reason; they lock the user to a certain area or region where transmission works, which, in effect, puts invisible strings on the device and hence on the user. It is those strings - not just the wires - that we want to get rid of."
If successful, the usable volume of "power hot spots" should be substantially expanded. It may not be easy, however, to maintain the efficiency of the power beam as it gets steered to a high degree. But that is a challenge that Urzhumov and his colleagues look forward to dealing with.
For more read Wireless Power Transmission for Consumer Electronics and Electric Vehicles 2012-2022.