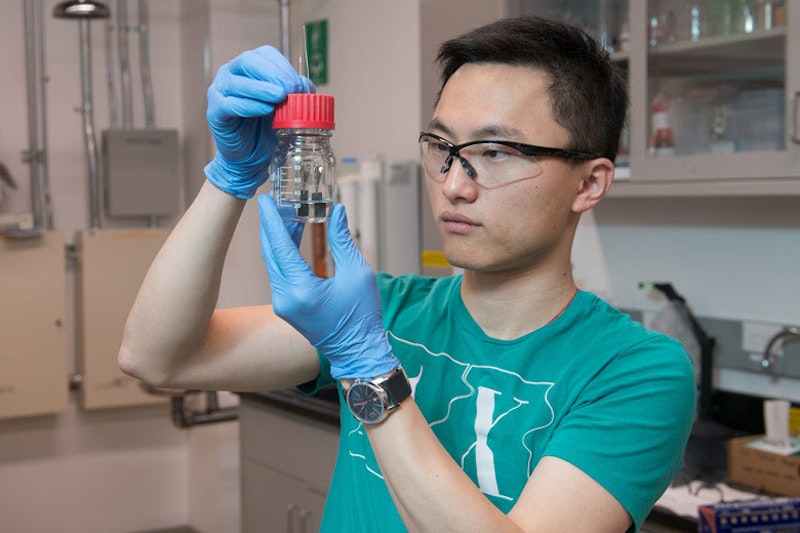 Stanford University scientists have invented a low-cost water splitter that uses a single catalyst to produce both hydrogen and oxygen gas 24 hours a day, seven days a week. The device, described in a study published June 23 in Nature Communications, could provide a renewable source of clean-burning hydrogen fuel for transportation and industry.
"We have developed a low-voltage, single-catalyst water splitter that continuously generates hydrogen and oxygen for more than 200 hours, an exciting world-record performance," said study co-author Yi Cui, an associate professor of materials science and engineering at Stanford and of photon science at the SLAC National Accelerator Laboratory. In an engineering first, Cui and his colleagues used lithium-ion battery technology to create one low-cost catalyst that is capable of driving the entire water-splitting reaction.
"Our group has pioneered the idea of using lithium-ion batteries to search for catalysts," Cui said. "Our hope is that this technique will lead to the discovery of new catalysts for other reactions beyond water splitting."
Clean hydrogen
Hydrogen has long been promoted as an emissions-free alternative to gasoline. Despite its sustainable reputation, most commercial-grade hydrogen is made from natural gas, a fossil fuel that contributes to global warming. As an alternative, scientists have been trying to develop a cheap and efficient way to extract pure hydrogen from water.
A conventional water-splitting device consists of two electrodes submerged in a water-based electrolyte. A low-voltage current applied to the electrodes drives a catalytic reaction that separates molecules of H2O, releasing bubbles of hydrogen on one electrode and oxygen on the other.
Each electrode is embedded with a different catalyst, typically platinum and iridium, two rare and costly metals. But in 2014, Stanford chemist Hongjie Dai developed a water splitter made of inexpensive nickel and iron that runs on an ordinary 1.5-volt battery.
Single catalyst
In the new study, Cui and his colleagues advanced that technology further. "Our water splitter is unique because we only use one catalyst, nickel-iron oxide, for both electrodes," said graduate student Haotian Wang, lead author of the study. "This bi-functional catalyst can split water continuously for more than a week with a steady input of just 1.5 volts of electricity. That's an unprecedented water-splitting efficiency of 82 percent at room temperature."
In conventional water splitters, the hydrogen and oxygen catalysts often require different electrolytes with different pH - one acidic, one alkaline - to remain stable and active. "For practical water splitting, an expensive barrier is needed to separate the two electrolytes, adding to the cost of the device," Wang said. "But our single-catalyst water splitter operates efficiently in one electrolyte with a uniform pH."
Wang and his colleagues discovered that nickel-iron oxide, which is cheap and easy to produce, is actually more stable than some commercial catalysts made of precious metals.
"We built a conventional water splitter with two benchmark catalysts, one platinum and one iridium," Wang said. "At first the device only needed 1.56 volts of electricity to split water, but within 30 hours we had to increase the voltage nearly 40 percent. That's a significant loss of efficiency."
Marriage of batteries, catalysis
To find catalytic material suitable for both electrodes, the Stanford team borrowed a technique used in battery research called lithium-induced electrochemical tuning. The idea is to use lithium ions to chemically break the metal oxide catalyst into smaller and smaller pieces.
"Breaking down metal oxide into tiny particles increases its surface area and exposes lots of ultra-small, interconnected grain boundaries that become active sites for the water-splitting catalytic reaction," Cui said. "This process creates tiny particles that are strongly connected, so the catalyst has very good electrical conductivity and stability."
Wang used electrochemical tuning - putting lithium in, taking lithium out - to test the catalytic potential of several metal oxides.
"Haotian eventually discovered that nickel-iron oxide is a world-record performing material that can catalyze both the hydrogen and the oxygen reaction," Cui said. "No other catalyst can do this with such great performance." Using one catalyst made of nickel and iron has significant implications in terms of cost, he added.
"Not only are the materials cheaper, but having a single catalyst also reduces two sets of capital investment to one," Cui said. "We believe that electrochemical tuning can be used to find new catalysts for other chemical fuels beyond hydrogen. The technique has been used in battery research for many years, but it's a new approach for catalysis. The marriage of these two fields is very powerful. "
Other Stanford co-authors of the study are postdoctoral scholar Hyun-Wook Lee, visiting student Zhiyi Lu and graduate students Yong Deng, Po-Chun Hsu, Yayuan Liu and Dingchang Lin. Support was provided by the Global Climate and Energy Project at Stanford and the Stanford Interdisciplinary Graduate Fellowship program.
Source and top image: Stanford University

Great development.This will revolutionize the market.

Sustainable Production, Traceability of Materials for Batteries
Fast-Charging Supercapacitor Technology
How are Batteries for Boats and Ships Different?
Upcoming Webinar on the Topic of Hydrogen Economy