Toyota to deliver fleet of mirai FCEVs to London 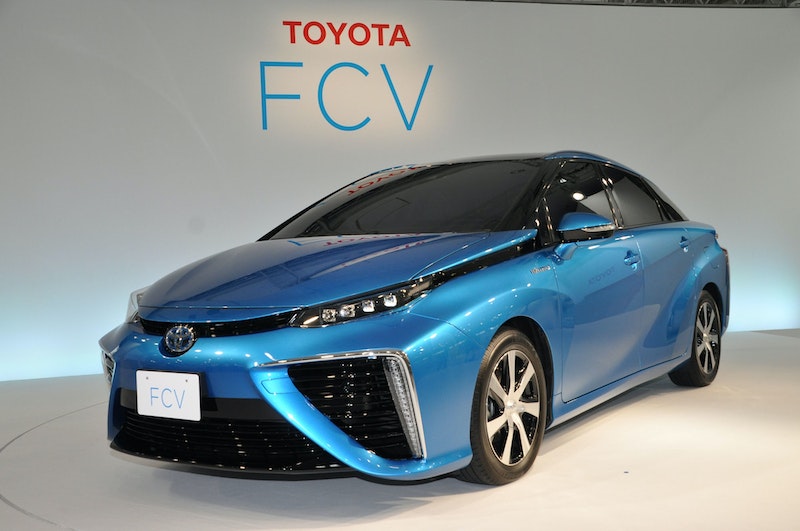 ITM Power is pleased to note the announcement made by the office of the Mayor of London that the capital will take delivery of a fleet of Toyota Mirai fuel cell electric vehicles. London has been named by Toyota as a key city for the early adoption of hydrogen vehicles.
Mayor welcomes new wave of hydrogen-powered passenger cars to London
The Mayor of London, Boris Johnson, welcomed news that some of the world's most advanced new hydrogen cars are coming to London, as part of his work to pioneer the use of the cleanest, greenest technology for the future of transport and infrastructure in the capital.
Manufacturer Toyota is set to deliver 12 brand new Mirai hydrogen powered vehicles to London, where four will be taken on by Transport for London to assist with essential engineering and maintenance work carried out between bus stops and Tube stations. The Mirai is the first hydrogen fuel cell sedan vehicle to be commercially mass produced. By the end of this year, all 12 of the vehicles will be on the road in the capital, to be used by private hire fleets and green minded businesses including the energy storage and clean fuel company ITM Power.
Toyota has named London as a key city for early adoption of hydrogen vehicles this year and next, given the Mayor's commitment to develop the necessary infrastructure and encourage motorists to move over to cleaner cars. The arrival of the new zero-emission cars is supported by the roll-out of vital new refuelling stations for hydrogen vehicles, and the Mayor's plans to introduce the world's first Ultra Low Emission Zone from 2020. In 2010, Transport for London launched the UK's first and Europe's largest fleet of hydrogen buses between Covent Garden and Tower Gateway. The service now runs eight buses across the route and is set to grow to ten in 2016.
The number of hydrogen refuelling stations in London is set to more than double by the end of 2016, creating provision for hydrogen vehicles in every corner of the capital. The Mayor's plans for the Ultra Low Emission Zone is helping to create a growing market for this type of cleaner technology, and will be a game changer in cleaning up London's air and enabling London's motorists to access greener vehicles.
The Mayor visited the headquarters of car manufacturing giant Toyota in western Japan and took one of the hydrogen powered Mirai for a test drive. He met with Toyota Senior Managing Officer Mr Kiyotaka Ise and General Manager Mr Yoshiaki Ito to discuss London's position as a market for alternative fuel cars including hydrogen.
The Mayor of London, Boris Johnson, said: "It is fantastic that London will benefit from these new state of-the-art hydrogen vehicles. By embracing this technology of the future, we aim to consolidate hydrogen's role as a practical alternative fuel for the 21st century and beyond. I am sure that Transport for London will provide the ideal environment for us to see everything the Mirai can do and, in doing so, take another great step towards improving air quality in our city and protecting the health of Londoners."
There are currently seven zero-emission hydrogen passenger cars in London, but with the arrival of the Mirai and further cars expected from South Korean motor manufacturer Hyundai this number is set to more than triple in the coming year.
Although still in early production, the Mirai represents an exciting opportunity for London which the Mayor is keen to exploit. TfL's cars, alongside the roll out of hydrogen refuelling infrastructure, are the first steps towards their wider adoption. The UK is one of the first global markets to be ready to take on this type of technology. More than 300 of the cars are now on the streets in Japan where infrastructure for the cars is rapidly growing. It is also being adopted in some parts of the United States as well as Germany, Denmark and Belgium.
Hydrogen powered vehicles emit no emissions from the tailpipe, just water vapour, and are on a par with conventional vehicles in terms of size, driving range, speed and refuelling time. Hydrogen can be produced through a wide variety of renewable energy sources including solar and wind power. As well as being exempt from the congestion charging fee in Central London, hydrogen vehicles pay no road tax and there is currently no duty on hydrogen as a road fuel.
London's next wave of hydrogen refuelling stations are being delivered through the HyFIVE project, a European-wide initiative led by the Mayor in collaboration with 15 partners including manufacturers and infrastructure providers, and part of his work to spearhead the introduction of the newest, cleanest hydrogen technology.
For more see Fuel Cell Electric Vehicles 2015-2030: Land, Water, Air
Source: ITM Power
Top image source: Toyota