The E-MEHARI is a vehicle connected to the history of the CITROËN brand but with its sights set squarely on the future. It is a wink to an iconic vehicle, the 1968 Méhari, but also far more than that: it is a cheery, all- electric 4-seater cabriolet with modern, fun styling. Through this new stage of its partnership with the Bolloré Group, CITROËN is confirming its ambition to bring to market cheery, optimistic vehicles that are different from the rest. 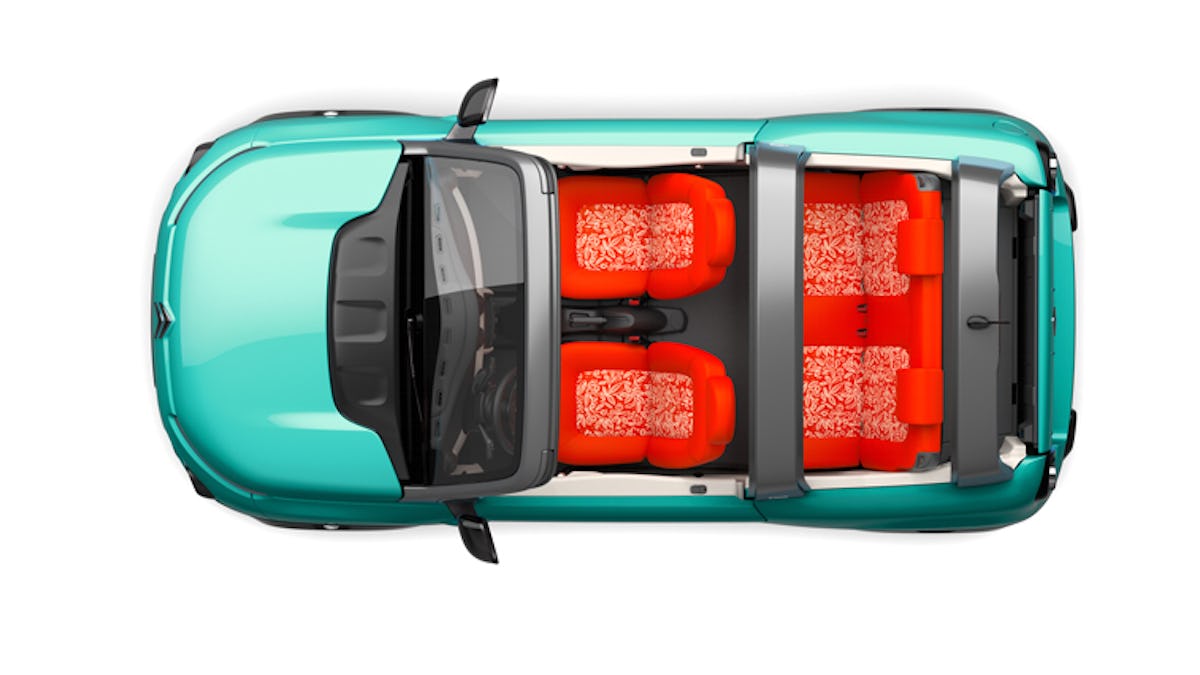 Silent and stress-free the E-MEHARI is designed to appeal to customers looking for an alternative vehicle attentive to trends and to the environment.
The exterior design of E-MEHARI reflects CITROËN's positioning. All the brand styling cues are visible, including dual headlights and a choice of colours. Interior trim is made of plastic-coated fabric and is completely waterproof. The E-MEHARI features a raised body, with touches of black provided by the wing extenders, lower valance and bumper. It is convertible, with a removable top closed at the side by a foldaway system with large windows. Users can cover the front, the rear, the side or the whole vehicle;
fitted with four real seats, including a folding rear bench ;equipped with a raised chassis for all-terrain driving; easy to use: it can be hosed all over, both inside and out and made with bodywork of thermoformed plastic: a material that is corrosion-free, with maintenance-free paintwork
The E-MEHARI features advanced technology. It is an all-electric vehicle with battery technology based on the expertise of France's Bolloré Group. With its LMP® (Lithium Metal Polymer) batteries, the E-MEHARI combines a long range with performance, reliability and security.
LMP batteries are recognised for their energy density and safety in use. They are dry batteries (it means "fully solid") giving them many advantages such as not being weather-sensitive. They give the E-MEHARI a top speed of 110 kph with a range of 200 km in the city.
These functional batteries can be fully recharged in eight hours on a 16A socket (domestic station or public stations such as Autolib in France), or in 13 hours on a 10A domestic socket.
Built at the PSA PEUGEOT CITROËN plant in Rennes, the E-MEHARI will launch in France in spring 2016.
Source and images: Citroën