Electric Vehicle Awards Presented In Berlin At The IDTechEx Show!

The prestigious Electric Vehicles Awards for 'Most Impressive New Company' and 'Most Significant Innovation' were presented at the IDTechEx Show! in Berlin last week, 27 April 2016.
The 'Electric Vehicles Everything is Changing' event started with a superb keynote session with speakers from Toyota Motor, Daimler, Siemens and the Berlin Agency for Electromobility (eMO).
Electric Vehicles were well represented in the exhibition hall and included the latest technology from the Nuon Solar Team with their world record-holding solar racing car Nuna8; test drives on the TESLA Model S; Aero Service demonstrating their EV4 - a 4-wheel drive vehicle made from an aluminium alloy; Bik2Aps and their Bike2.0 bicycle and drivesystem; and Altreonic showcased their innovative KURT e-vehicle concept for urban mobility. More details can be seen at: http://www.idtechex.com/electric-vehicles-europe/show/en/vehicles-on-show
The day ended with a drinks reception and award ceremony where two awards were presented in the Electric Vehicles category.

The first award was for 'Most Impressive New Company' and was presented to Andrea Marconcini from Energica Motor Company. The judges felt that Energica brought flair to an emerging new electric vehicle sector and their vehicle was both exciting and sure to be a commercial success.
Energica Motor Company S.p.A. is the first Italian manufacturer of high performing electric motorcycles and are completely manufactured in the Italian Motor Valley. 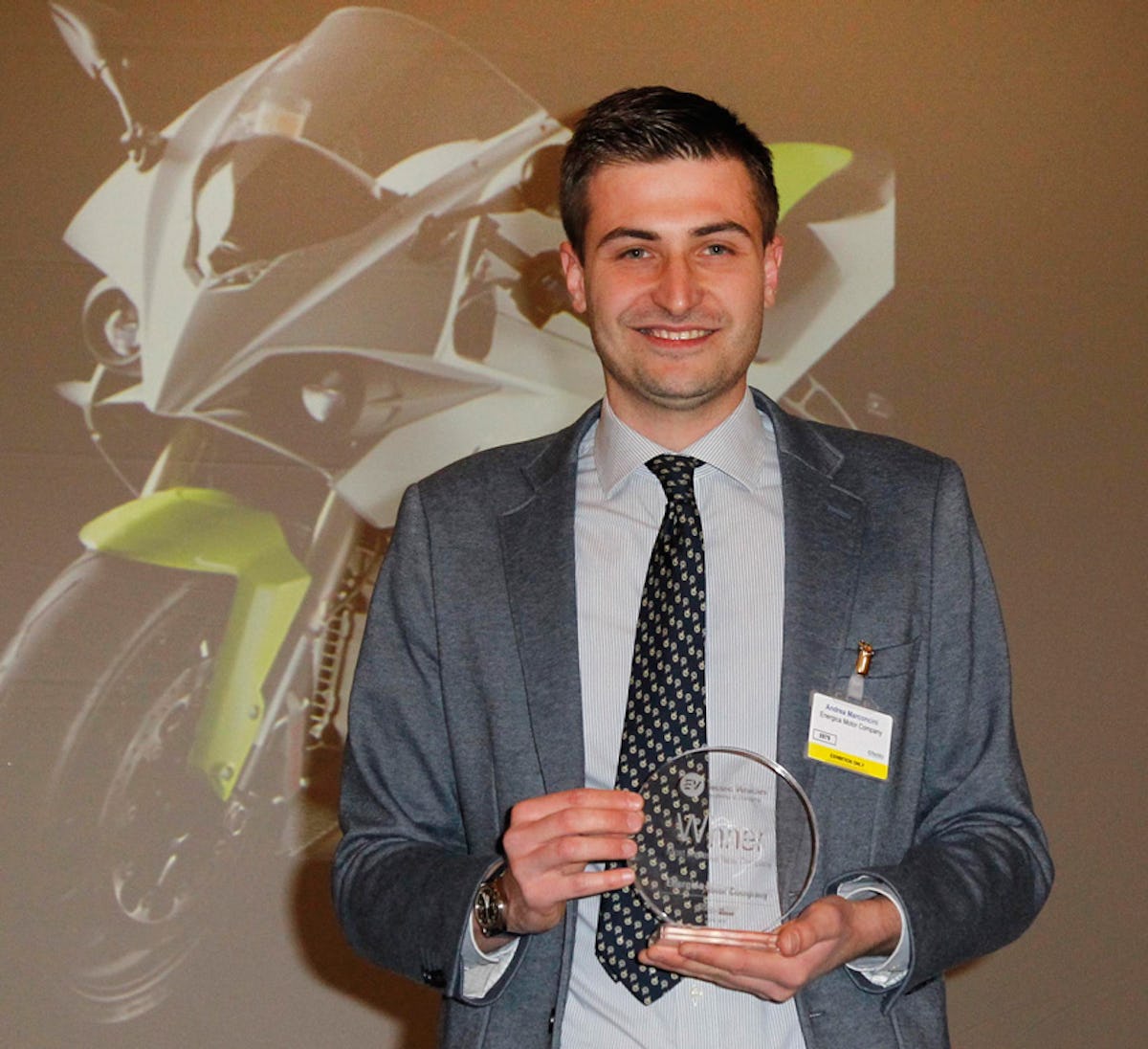 Andrea Marconcini, Energica Motor Company
CEO, Livia Cevolini was thrilled to win and commented: "Energica Motor Company is the first start-up from an Italian based high tech group (CRP) working in Formula1, motorsports and aerospace fields. What was originally an R&D project became a prototype and soon a final product tested and appreciated during test rides held in the US and Europe.
We are innovating the EV industry, a new industry that we believe will change the transportation and automotive businesses. Our products integrate EV technology, sport, performances and green values.
This award is a great achievement for Energica. It recognizes our effort and our vision, aligned to the most recent innovative industries trends. Being awarded by IDTechEx, a top international research institute means that Energica is doing well and we are even more committed in pursuing our goals and bring Electric Vehicles to market."

Altigreen Propulsion Labs were the recipient of the second Electric Vehicle award of the night 'Most Significant Innovation' which is given to the most significant new innovation in hybrid or pure electric vehicles and includes innovations in components and systems within the vehicles. Amitabh Saran, Ph.D., Founder and CEO was in Berlin to accept the award.
Altigreen's award submission was 'HyPixi - Every Car a Hybrid'. The premise of their technology is to build a solution for developing world countries who are suffering under high fuel prices and heavy tailpipe emissions. Altigreen brings to green technology that ingredient that is all too often missing - affordability.
Amitabh Saran commented further: "Altigreen Propulsion Labs joined the elite group of innovators by winning the IDTechEx Europe 2016 award for the Most Significant Innovation in Electric Vehicles. The award was presented in recognition of Altigreen's proprietary technology that will assist in democratizing the use of hybrid electric technologies in the emerging economies of the world where high vehicular density forces poor mileage and huge tailpipe emissions! Altigreen's patented technology converts fossil-fuel vehicles to greener electric hybrids, increasing mileage by 20% and reducing emissions by a similar amount, without any grid-based charging. The developing world is reeling under this new bleak/choking reality, and Team Altigreen stepped in to provide affordable, cutting-edge green solutions built specifically for their drive profile needs and environmental conditions. We are delighted to be bestowed this honor by the IDTechEx panel." 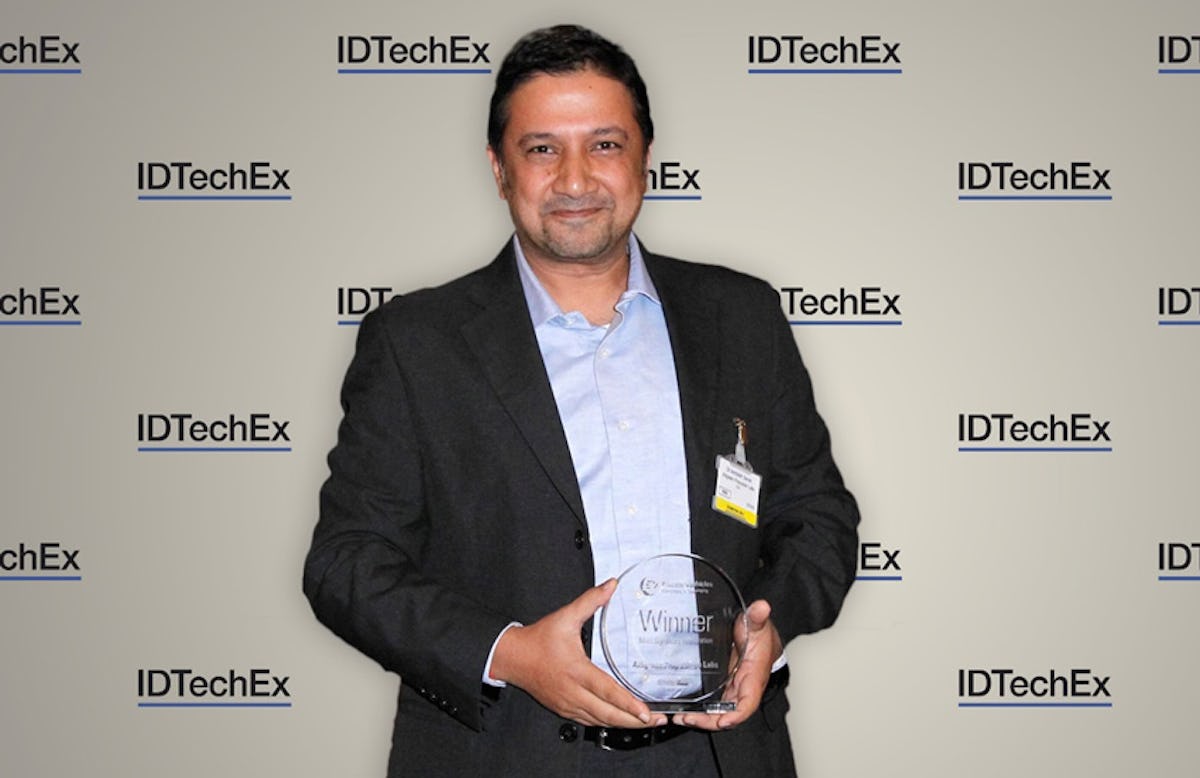 Amitabh Saran, Ph.D., Founder and CEO, Altigreen Propulsion Labs
IDTechEx will next be hosting these awards in Santa Clara on Nov 16 - please do enter! www.IDTechEx.com/USA