Electric vehicles; Everything is changing...or has it changed already? 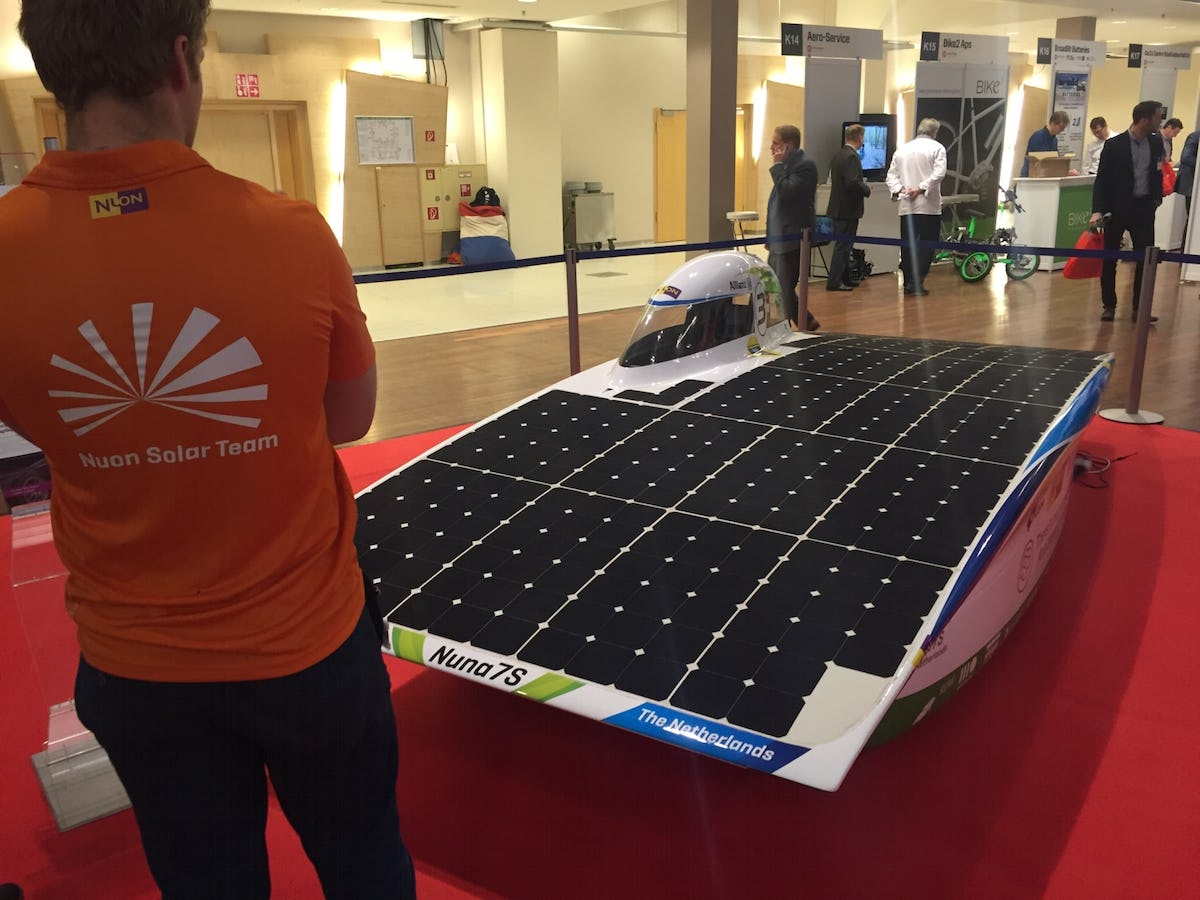 The Nuon team compete not only at the World Solar Challenge, but also at similar event in South African - to promote sustainable, high-end technology, and to educate young people, but mostly to win. And win they do. To succeed, the team focuses relentlessly on nine winning factors: teamwork; partners (often sponsors with 'tech benefits'); solar array & electronics; aerodynamics (the whole car is equivalent to a single wing mirror!); rolling resistance (low due to the carbon-fibre build); handling (eg easy to switch a tire); quality & reliability (lots of testing of components on Hank, the test vehicle); strategy (ie calculating power and performance based on sunlight, charge, gradient etc to optimise the solar car's performance); and finally production (it takes three months to build the lightweight body). And then a whole load more testing of everything, before transporting the team and car, 'static scrutineering' to check for safety, time trials, and then the race itself.
Next, it's start-up time. EVX Ventures told us about their attempts to take the academic solar car into the commercial arena, with a petrol-free Mad Max survivalist mission. As with most start-ups (certainly here at EVE), its about being lean and agile, persevering with 'entrepreneurial grit'; a real determination to succeed. As with most start-ups, they are looking for funding.
PannonPorto have the lightweight, range-extended electric sports car, the Amber One. It's 1000kg, with a 45-minute charge time and a 400v battery, with an Engiro combustion range-extender. The in-wheel motor is by Protean. A sister company, Moveo, has a delightful folding e-scooter. The scooter is very lightweight at 45kg, and it folds in the middle, into a cube shape. So it's highly transportable. And storable, at home, office, or holiday homes. 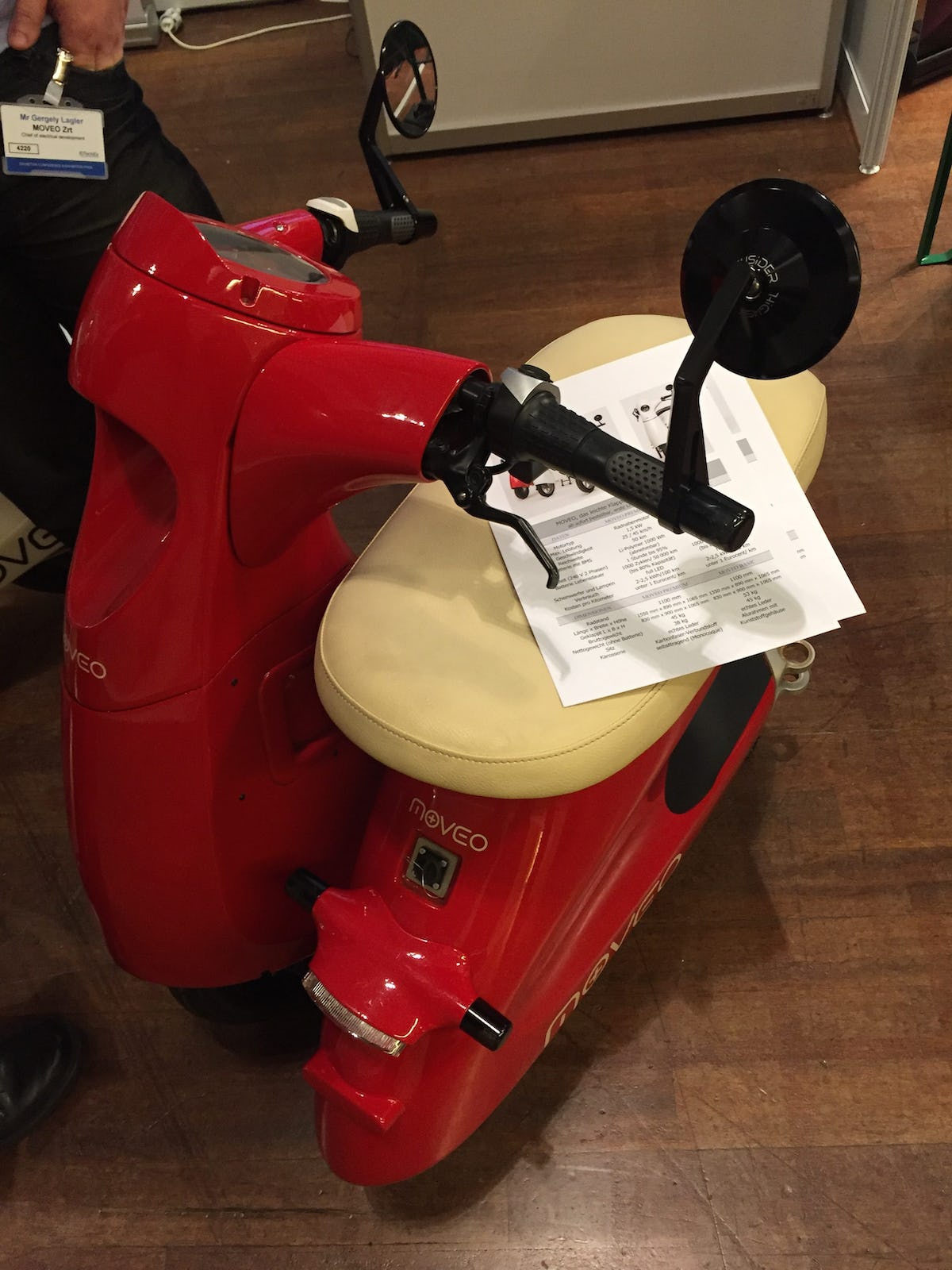 But my favourite eco vehicle was in the exhibition hall. I got onboard and took a ride. 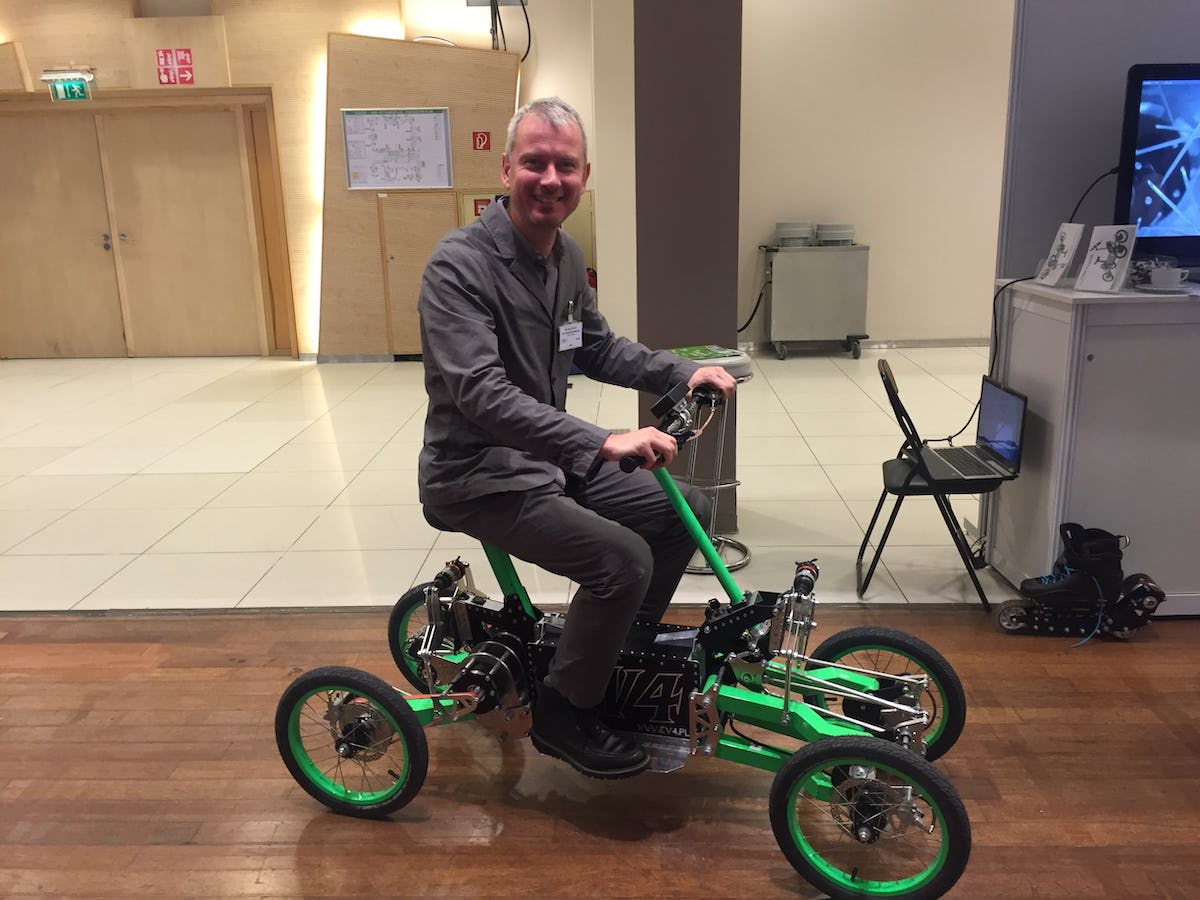 There were other interesting presentations, but here I've focused on those that resonated with me (before the unfortunate incident with the fishbone); those that fall clearly within the scope of EVE. We certainly share Dr Peter Harrop's vision of self-propelled vehicle/robots aiding and abetting humanity. And it's not far off Iain M Bank's 'Culture' technology, in his respected sci-fi series. But its a long way off. Electric cars, hydrogen cars, electric scooters, solar power are all great advances. Everything really is changing. But it hasn't changed anywhere near enough yet. Just look out of the window.
By David Hoole, Eco Vehicle Exchange