Solar Impulse takes off to cross the Mediterranean Sea 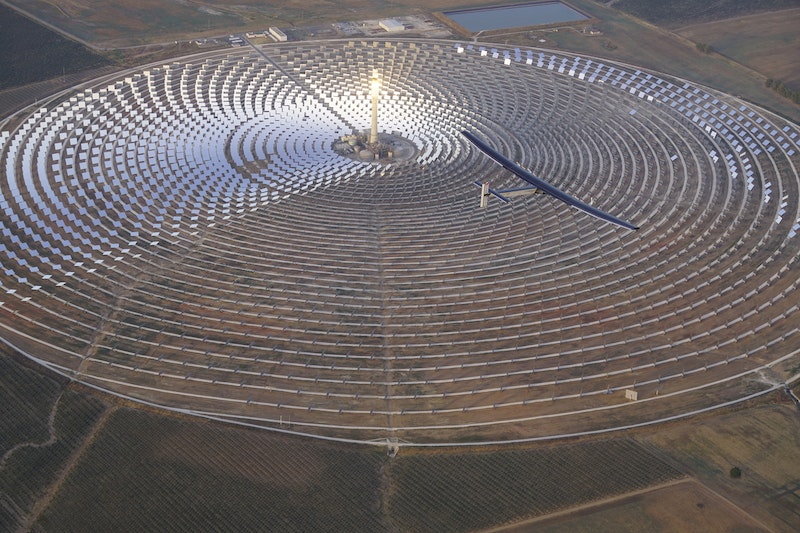 After crossing America and recently the Atlantic Ocean without a single drop of fuel, Solar Impulse 2 (Si2)- the solar airplane of Swiss pioneers Bertrand Piccard and André Borschberg - took off from Spain early yesterday morning to attempt the crossing of the Mediterranean Sea. The flight, that is expect to last two days and two nights depending on weather conditions, is the second to last leg of the attempt to achieve the first ever Round-The-World Solar Flight, the goal of which is to demonstrate how modern clean technologies can achieve the impossible.
Two and a half weeks after Bertrand Piccard's historic crossing of the Atlantic Ocean coming from New York, André Borschberg took off at the controls of Si2 from the Seville Airport, Spain, on 11 July at 6:20 am local time (UTC+2) and is expected to land at the Cairo International Airport, Egypt, on 13 July day at 9:00 am local time (UTC+2) after a flight of approximately 2'200 miles (3'600 km) - a journey across the Mediterranean Sea, from west to east, during which Si2 will fly in the airspaces of Spain, Algeria, Tunisia, Malta, Greece and finally Egypt. This is the largest number of airspaces ever overflown in one go with Si2. The flight also marks the second to last leg of the attempt to achieve the first ever Round-The-World Solar Flight and the last flight of CEO and Co-Founder André Borschberg in the context of this pioneering adventure.
"This flight across Europe will touch a large number of countries, very diverse in terms of culture, climate and geography. But in addition to all being on the shore of the Mediterranean Sea, they have a common denominator: the potential benefit of using renewable energies and clean technology," said André Borschberg, Co-founder and CEO currently at the controls of the solar airplane.
"After 36'000 km, people might start to find it obvious to fly day and night without fuel, but it's still a very difficult endeavor and the challenge will remain open until the last minute," added Bertrand Piccard, Initiator, Chairman and Pilot.
Thanks to the Seville Airport, the Municipality of Seville, the Andalusian Region, the Prince Albert II of Monaco Foundation and the Spanish Air Force with its welcoming Patrulla ÷guila (Eagle Patrol) squadron, Solar Impulse was able to run efficient and smooth operations during its stay in Spain. After landing in Cairo, Si2 will be ideally positioned to attempt the last leg of adventure and reach Abu Dhabi in the United Arab Emirates where the adventure started in March 2015. Together with their team and partners, Bertrand Piccard and André Borschberg are attempting the first Round-The-World Solar Flight with no fuel to show that the world can be run on clean technologies. Solar Impulse's technologies can already be used not only in the air, but also on the ground, and have the potential to change individual habits, societies and markets in an unprecedented way.
For more information on this subject see Energy Independent Vehicles 2016-2026 and Energy Independent Electric Vehicle Technology Roadmap 2016-2036
Source and top image: Solar Impulse