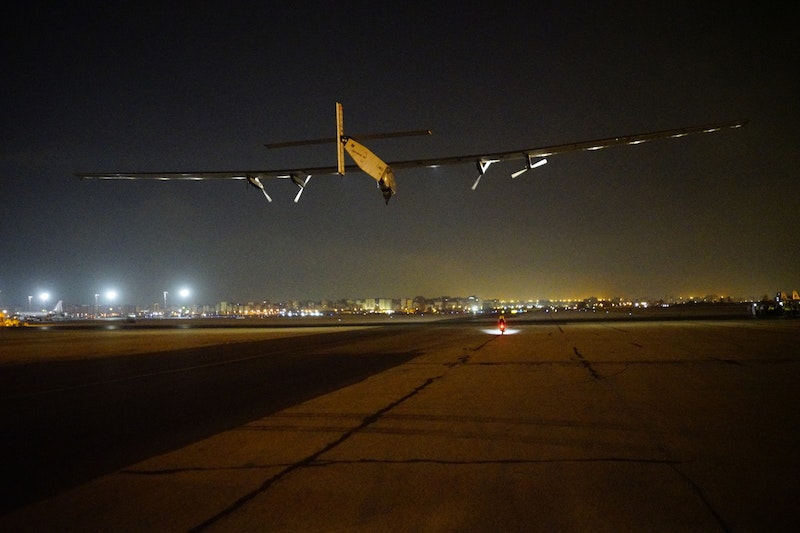 10 days after André Borschberg's arrival in Cairo following the crossing of the Mediterranean Sea, Bertrand Piccard took off with Solar Impulse 2 (Si2) for the final leg of the first ever Round-The-World Solar Flight - a pioneering endeavor considered impossible by many when initiated 15 years ago. Si2 is now heading to Abu Dhabi where it should land after a flight of two days and two nights, depending on weather conditions.
At the controls of Si2, the revolutionary airplane that flies with no fuel propelled only by the energy of the sun, Bertrand Piccard took off from Cairo International Airport, for the final stretch of the first ever Round-The-World Solar Flight, and is expected to land at the Al Bateen Executive Airport in Abu Dhabi on 26 July. For this last leg, Bertrand will be welcomed by André Borschberg who flew Si2 for the departure from Abu Dhabi in March 2015. Close to crossing the finish line and achieving the incredible goal of circumnavigating the globe with zero-emissions, Solar Impulse is now more than ever writing the future of energy efficiency.
But the suspense entirely remains for the last leg of this pioneering journey which promises to be as challenging as the previous 16, in particular due to current heat in the Middle East, especially at this time of year. The hot temperature is at the limit of the design requirements of Si2. In addition it causes, even at high altitudes, thermals and turbulences forcing the pilot to stay longer periods of time with the oxygen mask for many days in a row.
"It's very emotional to take off from Egypt with Si2, given that I landed here in 1999 after accomplishing the first non-stop round the world balloon flight. It's precisely here that started my dream of making another circumnavigation, but this time without fuel, only on solar power. I'm excited to come so close to the goal, but unfortunately there are still so many people we have to motivate before having a world running on the same clean technologies," shared Bertrand Piccard, Initiator and Chairman, currently piloting Si2 toward Abu Dhabi.
"I am very moved to see Bertrand take off for the last leg of this incredible dream. It reminds me of the first time we met to discuss this seemingly impossible mission and the excitement it created in my mind. Today, we are living the final moments of a once in a lifetime adventure contributing to setting a new milestone in aviation - one centered not on speed or height, but instead on exploring new clean and efficient technologies that can almost make it possible for the plane to fly with unlimited endurance, a week, a month; something that was never done," said André Borschberg, CEO, Co-Founder and Pilot.
To make his dream a reality, Bertrand Piccard, a medical doctor and explorer at heart, teamed up with André Borschberg, an engineer and savvy entrepreneur. Both men have been taking turns piloting Si2 around the world, but have different respective roles within the project - while Piccard outlined the project's vision and political reach and brought together the partners who provided funds and technology for this adventure, Borschberg pulled together the team that designed and constructed Si2 and drives the airplane's technological innovations into new engineering solutions.
Thanks to the immense support of the Swiss Embassy in Egypt and the Egyptian Ministry of Civil Aviation, in particular the Civil Aviation Authority, the Cairo Airport Company and the National Air Navigation Service Company, as well as the help of the Egyptian Ministry of Tourism and the Egypt Tourism Authority, Solar Impulse was able to run efficient and smooth operations in Cairo and successfully prepare for the final leg of the journey. After landing in Abu Dhabi in the United Arab Emirates, where the adventure started in March 2015, Bertrand Piccard and André Borschberg, together with their team and partners, will continue Solar Impulse's mission of advocating that concrete energy efficient solutions can solve many of the challenges facing global society today.
Source and top image: Solar Impulse
Learn more at the next leading event on the topic: Electric Vehicles: Material Opportunities Europe 2020