From its facts based research, IDTechEx has what some regarded as over-optimistic forecasts for electric cars. However, others are now matching or exceeding our optimism. IDTechEx predicts about 26 million hybrid and pure electric cars sold in 2027. 48V mild hybrid cars are coming in in a big way this year because they are a quick fix for production lines making conventional cars that cannot meet new emissions laws and have uncompetitive fuel consumption. These do not have pure electric modes: the wheels are never driven by electric motors. However, later versions will have silent pure-electric takeoff, creeping in traffic, active cruising called sailing and pure electric parking as explained in the IDTechEx reports, Mild Hybrid 48V Vehicles 2017-2027 and Electric Car Technology and Forecasts 2017-2027. Any such modes technically makes them electric vehicles so it is possible that all 48V mild hybrid cars in 2027 will be EVs taking the figure to well over 30% of cars made in 2027 though that is not currently our prediction. We believe some of them will have EV modes by then.
Bloomberg reported in April 2017 that electric cars are coming fast — "and that's not just the opinion of carmakers anymore. Total SA, one of the world's biggest oil producers, is now saying pure electric versions may, on their own, constitute almost a third of new-car sales by the end of the next decade". Already China is the world's largest market for cars of all types and it is also now the leader in electric car purchases so it is not surprising that everyone sees that pertaining in 2027 as well. See the IDTechEx overview, Electric Vehicles Land, Water, Air 2017-2037 Forecasts, Analysis, Opportunities.
The surge in battery powered vehicles will cause demand for oil-based fuels to peak in the 2030s, Total Chief Energy Economist Joel Couse said at Bloomberg New Energy Finance's conference in New York on Tuesday. EVs will make up 15% to 30% of new vehicles by 2030, after which fuel "demand will flatten out," Couse said. "Maybe even decline."
Couse's projection for electric cars is the highest yet by a major oil company and exceeds BNEF's own forecast, said Colin McKerracher, head of advanced transport analysis at Bloomberg New Energy Finance.
"That's big," McKerracher said. "That's by far the most aggressive we've seen by any of the majors."
Bloomberg pure electric car forecast April 2017 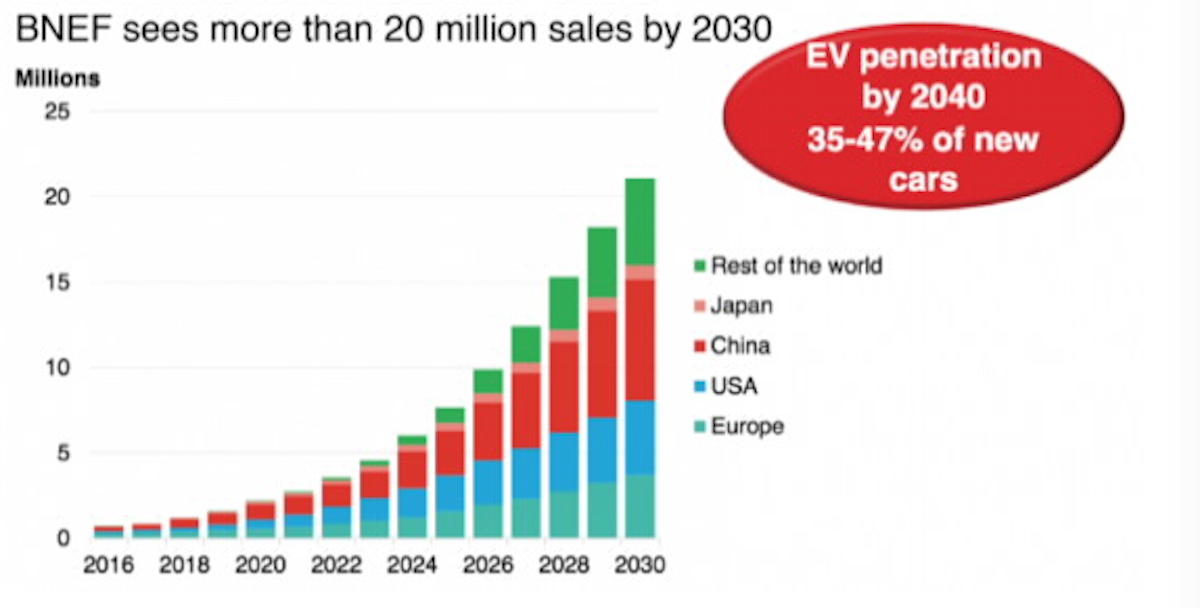 Source Bloomberg
Other oil companies have been trimming their long-term forecasts for oil demand. Royal Dutch Shell Plc Chief Executive Officer Ben van Beurden said in March that oil demand may peak in the late 2020s. It set up a business unit to identify the clean technologies where it could be most profitable.
Pure electric cars are beginning to compete with gasoline models on both price and performance. Bloomberg has predicted that the total cost of ownership of many of them will be less than that of conventional versions around 2022 and some car makers imply that up-front cost - the killer blow - will be lower before 2027. The most expensive part of an electric car is the battery, which can make up half the total cost, according to BNEF. The first electric cars to be competitive on price have been in the luxury class, led by Tesla Inc.'s Model S, which is now the best-selling large luxury car in the U.S.
But battery prices are dropping by about 20% a year, and automakers have been spending billions to electrify their fleets. Volkswagen AG is targeting 25% of its sales to be electric by 2025. IDTechEx sees peak internal combustion engine around 2020. Toyota Motor Corp. plans to phase out fossil fuels altogether by 2050.
Electric cars currently make up about 1% of global vehicle sales, but traditional carmakers are preparing for transformation. In 2018, Volkswagen progresses into electrification with an Audi SUV and the first high-speed U.S. charging network to rival Tesla's Superchargers. Tata Motors Ltd.'s Jaguar and Volvo Cars both have promising cars on the way too, and by 2020, the avalanche really begins, with Mercedes-Benz, VW, General Motors Co. and others releasing dozens of new models.
Pure electric car range improves rapidly 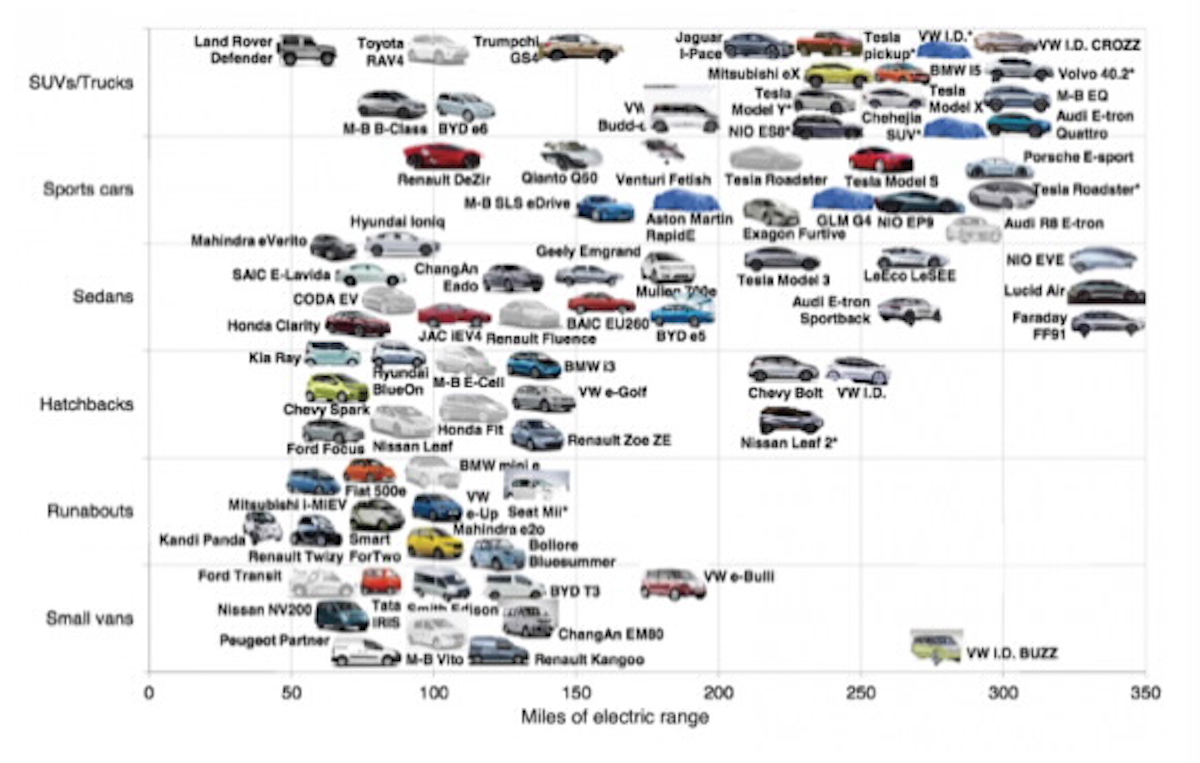 Source Bloomberg
"By 2020 there will be over 120 different models of EV across the spectrum," said Michael Liebreich, founder of Bloomberg New Energy Finance. "These are great cars. They will make the internal combustion equivalent look old fashioned." For more attend the IDTechEx Show! Berlin 10-11 with 3000 paying delegates, 9 parallel conferences.
Top image: UNC Charlotte