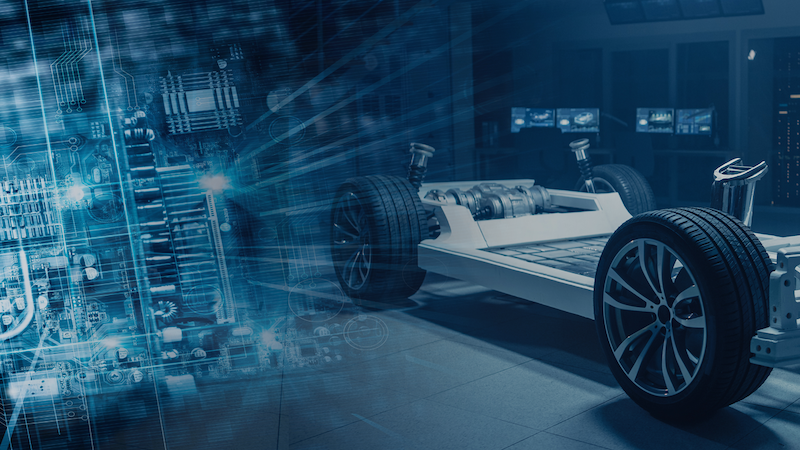 Semiconductors are the lifeblood of the modern age. From your watch to a washing machine, everything these days seems to be 'smart', 'connected' and therefore enabled by semiconductors. Unsurprisingly then, a massive shortage of chips present 'across all categories', according to some industry executives, is having a profound impact.
Recent research from IDTechEx in their brand new market research report, "Power Electronics for Electric Vehicles 2022-2032", explores the importance of inverters in achieving ever greater EV range and market differentiation.
However, fundamentally, the power electronics industry is underpinned by a transition towards fancy new semiconductor technology, and even without this, drives demand for semiconductor content per electric vehicle roughly 2.3x that of internal-combustion engined ones. Is electrification sustainable amid a semiconductor shortage? 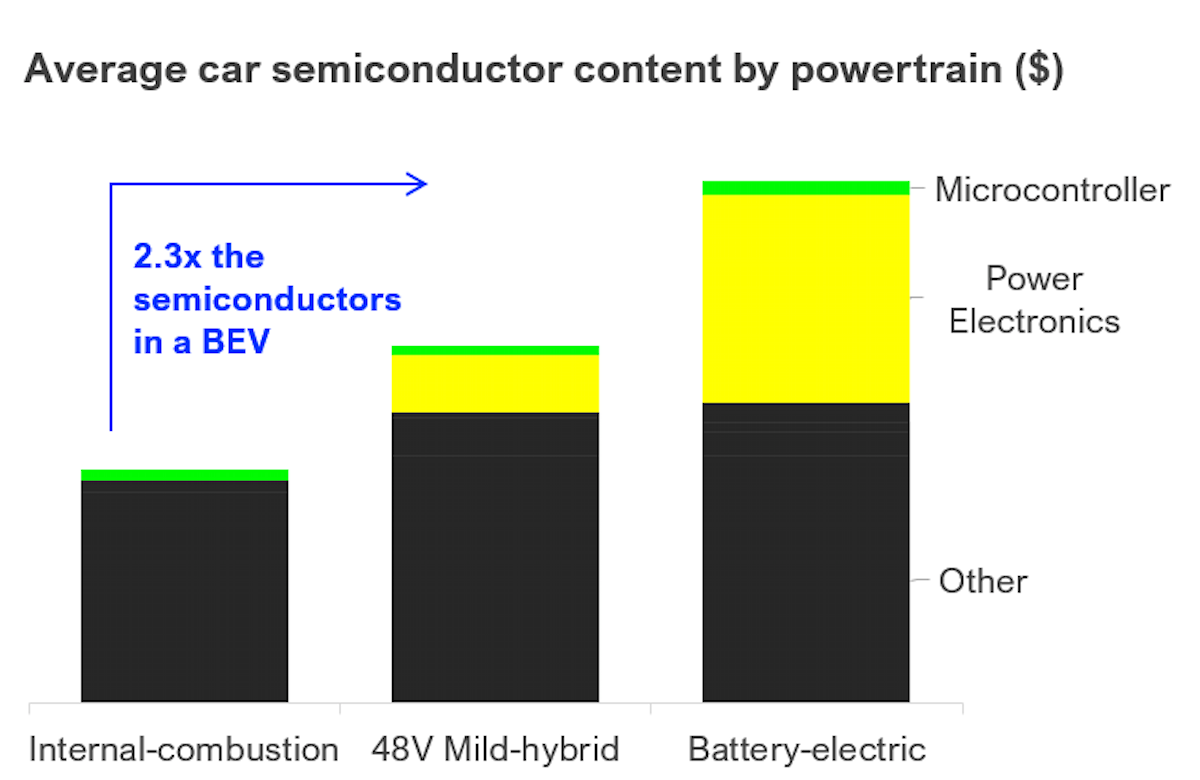 The auto market was one of the big industry losers of the pandemic. In 2020, demand for new cars tumbled: sales were down ~15% YoY, driven by changing consumer needs around travel, job uncertainty, and factory closures during lockdowns.
The problem is semiconductor foundries need to operate as continuously as possible due to the fallout from interruptions and long start-up times, which last weeks to months and eat into profits. Inevitably, while automotive demand waned in 2020 and automakers postponed or canceled orders, the slack was quickly redirected to other sectors and has not been so easy to channel back.
In 2021, demand from other sectors (covid-induced or otherwise) such as smartphones, cloud computing, or data mining, still has not slacked off, and the crisis has been deepening with lead times for key parts like microcontrollers reaching as high as 44 weeks.
In April, Ford estimated it would sell 1.1 million fewer vehicles due to the shortages, and last month, Toyota, which had been coasting on reserves, also reduced production.
The issue is also exacerbated by a concentrated supply chain, creating a single point of failure. Many companies spring to mind when thinking about computer chips - Intel, Apple, NVIDIA, Qualcomm, AMD - but few of these companies manufacture them.
In fact, most production is outsourced to foundries in Asia, where Taiwan Semiconductor Manufacturing Company (TSMC) has close to 60% market share, based on revenue. The lack of companies capable of manufacturing chips, and long lead times to switch between suppliers, means automakers are stuck.

Impact of semiconductor shortages on EVs

It is difficult to predict the impact of the chip shortages on electric vehicle markets. Unlike the global auto market, electric vehicle sales grew consistently throughout 2020 with ~40% year-on-year growth; the surge is continuing this year with sales on track to reach ~5 million in 2021.
What is remarkable is that electric vehicles require more semiconductor content than internal combustion-engined ones. By 2022, with current trajectories and assuming no supply constraints, we estimate electrification in the automotive sector (BEV, PHEV, FCEV, HEV, 48V) will demand an additional $7.4 billion worth of semiconductor material compared to a scenario without electrification.
However, while electric vehicles are a massive growth sector for the semiconductor industry, growth is driven by power electronics, while current shortages are mainly affecting microcontrollers (MCUs).
Moreover, the continued growth of electric vehicle markets through 2020 means it is less likely automakers canceled EV parts, at least to the same degree as internal combustion cars, and electric vehicles were able to sidestep some of the brunt of the impact.
Tesla claims it has largely managed the crisis in 2021 by building new microcontroller designs and changing microcontroller suppliers - its sales have remained strong. Less established EV start-ups are having a harder time but tend to operate in premium or other low-volume sectors. For example, Nikola has delayed the release of its FCEV vehicles, but this is a loss of under 100 units in 2021.
Electric vehicles markets will be impacted, but IDTechEx do not think they will stop growing. Light is at the end of the tunnel, with Ford saying, 'we see Q2 2021 as the trough'. Indeed, IDTechEx thinks gradual improvements will occur through 2022, which largely depends on demand from phone/laptop/home-office tech sectors cooling off rather than long-term capacity expansion plans from foundries.
For more information on this report, please visit www.IDTechEx.com/PowerElec. This report forms part of the broader electric vehicle and energy storage research from IDTechEx, who track the adoption of electric vehicles, battery trends, and demand across more than 100 different mobility sectors. This is summarized in a master report: www.IDTechEx.com/EV, or for further in-depth analysis, please see the full portfolio of electric vehicle research available from IDTechEx: www.IDTechEx.com/research/EV.