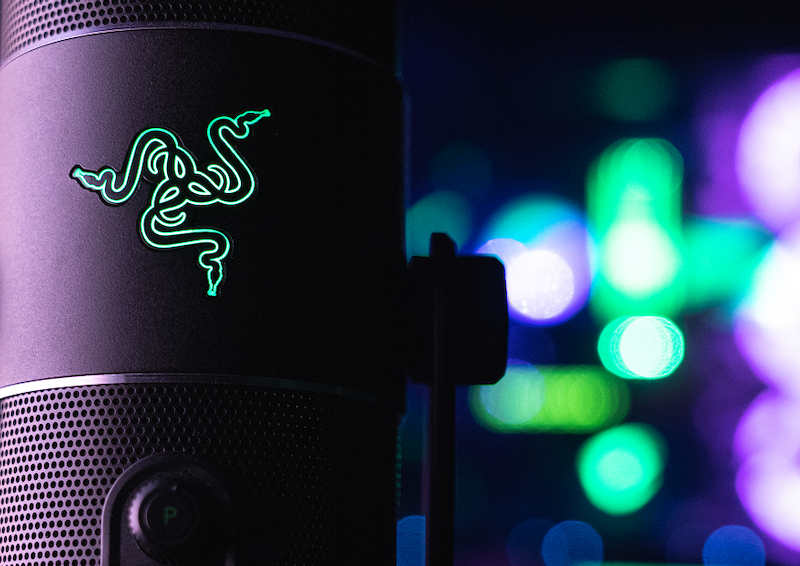 Razer, one of the leading global companies providing gaming hardware, announced the acquisition of 100% of the shares of Go Touch VR SAS, also known as Interhaptics, a French startup founded in 2017 and specialized in haptics tools and software. Razer showcased its haptics ecosystem - HyperSense - in 2018 for the first time, supported by the company's gaming peripherals. The developments over the past few years, however, have only led to the use of HyperSense in a few headset models. This time with the acquisition of Interhaptics, Razer will be looking to expand HyperSense across more products to build out a full ecosystem of peripherals with haptic features.
Razer is not the only gaming company that has invested much in haptic technology. Coming with the PS5 console, Sony's DualSense controller is a revolutionary product in terms of utilizing haptics in gaming. Not only does it adopt the high-fidelity LRA-enabled vibration, but the DualSense is also the first controller to include kinaesthetic haptic feedback in the back triggers for enhanced effects. The DualSense implements some patented technologies from General Vibration, a US haptics technology company. IDTechEx has interviewed both Interhaptics and General Vibration recently. The detailed company profiles and product examples of these two companies and many others can be found in IDTechEx's recent report "Haptics 2023-2033: Technologies, Markets and Players".
Haptics have been rather ubiquitous in daily life, found in different devices, particularly smartphones. However, simple rumbling no longer meets the customers' expectations. The real trend and motivation behind the market is to create a more immersive user experience with haptic feedback. This is not only valid in the gaming industry but also in many more spaces such as extended reality (VR, AR & MR). The final target is to simulate the real sense of touch when the user interacts with the product. The haptic effect is not limited to vibration but can potentially be extended to sensing surface texture, forces, temperature, and more.
The predominant technologies for haptics as of 2022 are eccentric rotating mass (ERM) motors and linear resonant actuators (LRAs). These haptic motors are widely used in gaming products. For example, ERM motors are used in most gaming controllers (e.g., Xbox controllers), while LRAs are seen in more recent products such as the Nintendo Switch and the Steam Deck. These motors have their restrictions and can hardly satisfy the users' increasingly higher expectations for haptic effects. More advanced technologies are therefore being demanded. Some potential options include voice coil motors (VCMs), piezoelectric actuators, etc. The new technologies with higher value-adds drive the growth of the haptics market in the long-term future.
In addition to new technologies, new markets can also be an important factor driving market growth. Examples of markets with promising opportunities for haptic implementations include the automotive and extended reality (VR, AR & MR) industries. Haptics in extended reality, as discussed, creates an immersive experience for users. In vehicles, however, haptics currently tend to be used for safety alerts. For example, some cars have haptic steering wheels that will vibrate to alert the driver when the car is deviating from the lane. In the future picture, haptics will mean more than safety alerts in vehicles. Haptics can be a significant interface for interacting with the autonomous driving system. Furthermore, a plausible argument is that when fully autonomous driving becomes a reality, the car becomes a center of relaxation and entertainment, and therefore the use of haptics in vehicles may be focused on enhancing user experience, like in other devices. The chart, taken from the report "Haptics 2023-2033: Technologies, Markets and Players", shows IDTechEx's short-term forecast on the market growth for haptics in automotive and extended reality. 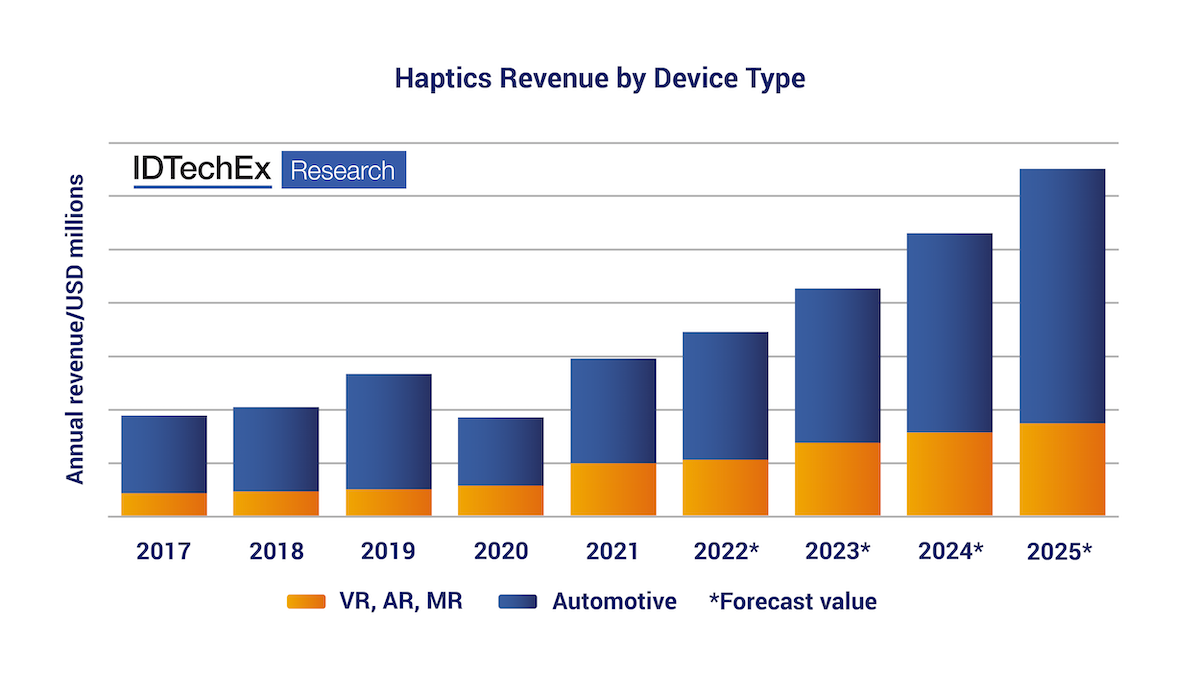 Historic data and forecasts of haptics revenue for XR and automotive, showing promising market growth over the next decade. Full data is included in the report. Source: IDTechEx
Haptics has been an inseparable part of many devices. Haptic feedback is not just vibration - it is the interaction with devices, the safety alert, and an indispensable element for creating an immersive experience. IDTechEx is optimistic about the long-term growth of the haptics market and expects more advanced technologies to be adopted in more devices.
For more information on this report, please visit www.IDTechEx.com/Haptics or for the full portfolio of research available from IDTechEx please visit www.IDTechEx.com.
IDTechEx guides your strategic business decisions through its Research, Subscription and Consultancy products, helping you profit from emerging technologies. For more information, contact research@IDTechEx.com or visit www.IDTechEx.com.