The IDTechEx report, Electric Buses and Taxis 2012-2022 concentrates primarily on buses defined as enclosed vehicles with a driver that have been designed for stage carriage or transit work and carrying at least 10 passengers. The market for these electric buses and taxis at ex-factory prices will rise 8.7 times from $6.24 billion in 2011 to $ 54 billion in 2021. Of course, the largest part of that will be buses and detailed figures to 2022 are given in the report. In the main, the buses will be designed exclusively for that purpose, though some will have power trains used for trucks as well. China will become by far the largest market for both electric buses and electric taxis.
The vibrancy in electric buses, both hybrid and pure-electric, is in stark contrast to the despair about pure-electric on-road cars, where sales dribble along at less than one third of the sales of golf cars - a saturated market. Club Car, part of Ingersoll Rand in the US, continues to claim that it is the world's largest pure-electric car manufacturer purely due to being number one in golf cars.
It has long been known that almost no one wants a pure-electric on-road car with range of 100 miles (160 km) or less. Those that do usually ask for plenty of charging stations in sight during the journey and at destination but these are not yet available in the desired numbers. The owners of pure-electric cars charge them at home but need the other charging stations as "lifebelts" in case they need them, though they will be rarely, if ever used - like lifebelts. That means that someone wealthy needs to put in the charging stations because they will rarely be financially viable. To some extent, national and local governments, retailers and employers are stepping to the mark but for how long when few such cars are being purchased? For more see, Electric Vehicle Charging Infrastructure 2012-2022.
Lazy car design
In a sense, roadside charging stations are putting the clock back because they are visually similar to the old parking stalks at every parking place by the road - ugly, expensive and ultimately unnecessary. There is a better way and that is to increase the range of pure-electric cars. It is amazing that two leading German car manufacturers are launching pure-electric cars this year that repeat the old error of shoehorning electrics into a heavy body not intended for the purpose. The result is, once again, an unacceptable range of 100 miles or less. Yet benchmarking best practice for affordable pure-electric vehicles by land, water and air shows that 150 miles range is the achievement of the best practitioners.
That is still unacceptable to most of us but there is now a great selection of new technologies that, if applied to "born electric" platforms that are lighter and more aerodynamic, can give 200 miles range or more. They include multiple energy harvesting such as large area, conformal photovoltaics, unfurling and unfolding photovoltaics and small wind turbines when stationary. Add to that energy harvesting shock absorbers, more efficient powertrains, including regenerative braking without separate generators, improved electric motors and supercapacitors across batteries so more of their power can be used, performance is improved and life increases. This year, the supercapacitors appear in the new Bollore Bluecar model and the Mazda sports car but no one is using more than one or two of the modern options in cars. Contrast aircraft that run entirely on solar and sometimes regenerative soaring or Autonomous Underwater Vehicles (UAVs) that surface to garner both wave and solar power. Consider Beneteau seagoing leisure boats that recharge their batteries by the propeller going backwards when they are under sail or moored in a tide and the small wind turbines you see being used by most boats in a marina. Most electric cars harvest no energy at all when stationary. Their designers should get out more.
Car tipping point
There will be a tipping point when pure-electric cars are bought in large numbers, notably when they have longer range because few people can afford or want two cars even on those rare occasions when they have space to park them. When they have something nearer to the range of familiar conventional vehicles that we take on holiday and use for the occasional long journeys in emergency and when the price premium is reduced, sales will jump. There is notoriously minimal correlation between what people say and what they do, so no amount of questionnaires will reveal the tipping parameters. However, IDTechEx Ex analysts believe that the tipping point may be around 300 miles range and that will be affordably achievable near the end of the coming decade even with some improvement of pricing. It will not be achieved simply by the hoped-for three-times improvement in battery cost and energy density. That may well not happen. It will be achieved by lots of little things. Welcome back to the real world. A drop-in range extender, in a module with its fuel, may be an optional extra.
Buses are in the lead
Urban buses lie in contrast to all this, primarily because they are adopting new technology much more rapidly and they do not need long range. We have seen a blistering rate of change from large conventional engines to hybrids with increasingly specialist engines designed to purpose. In only a few years, the battery for the hybrid bus has progressed from nickel metal hydride to lithium-ion to none at all - a supercapacitor doing the job in the successful Lion urban bus of MAN in Germany.
Figure 1. MAN Lion urban bus with supercapacitors and no traction battery 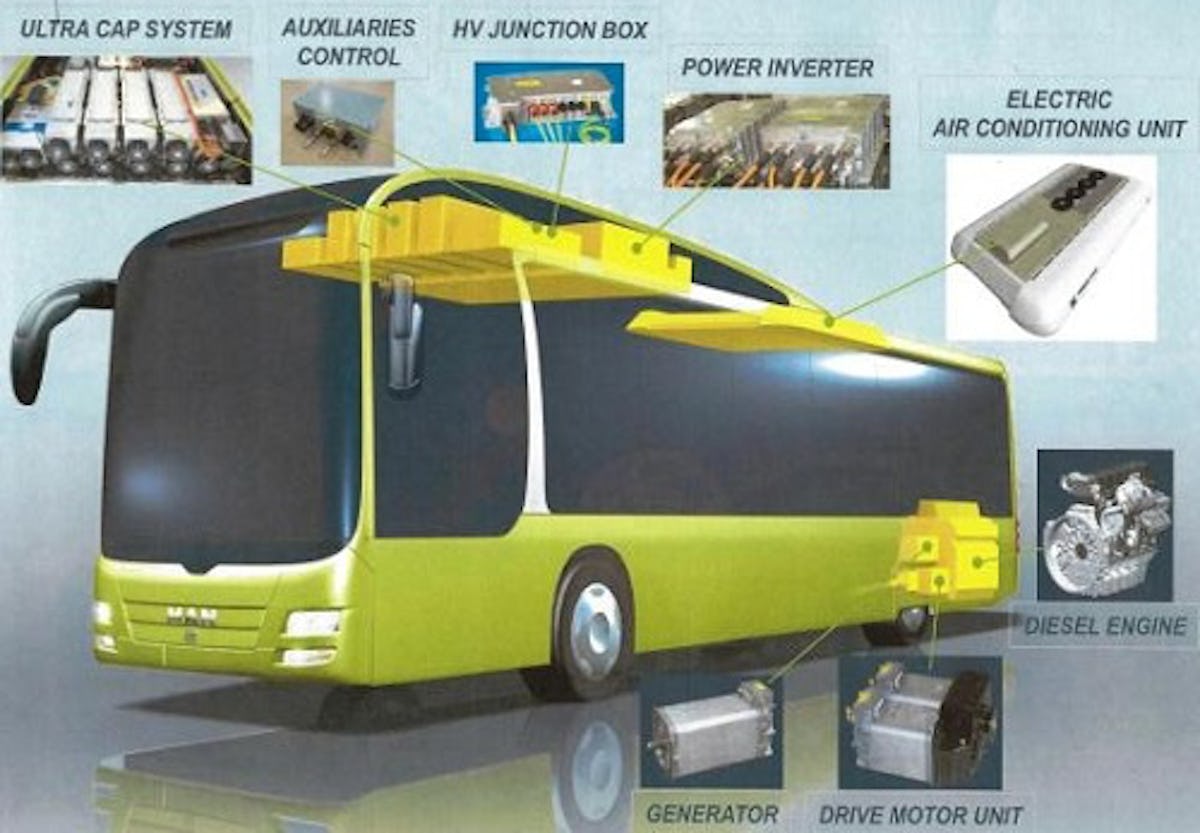 Source: MAN
Bombardier and many Chinese manufacturers only make pure-electric buses, seeing the interim hybrid option as something for the history books. Fast charging is commonplace and Bombardier has inductive charging as used in its trams and trains. Buses are close systems so they do not need the standardisation that is delaying inductive charging of cars. Bombardier has a lithium-ion battery tolerant of fast charging so it does not use a supercapacitor. By contrast, the Sinautec pure-electric buses, which have supercapacitors fitted for life and no batteries, are about to be bought in hundreds. This is a step to greater things, not least in China where over 100,000 electric buses a year will eventually be bought as part of the national program. On the other hand, Volvo, despite claiming to have been the world's largest manufacturer of ten-meter-plus pure-electric buses when it passed 500 pure-electric buses delivered, now favours hybrid urban buses of advanced design. This disagreement is healthy and technological change is rapid, putting car manufacturers to shame. Even the UK has recently launched a £20 million green bus competition.
Long distance buses and trucks have seen gas turbine based hybrids these last 14 years with more advanced versions coming along and a big push for fuel cells as range extenders starting in 2015 at Tata, Toyota, Daimler and others. Some solar is used on buses but they provide useless levels of power just like on today's cars because wide area is not yet utilised.
However, buses will soon be the launch point for energy harvesting shock absorbers producing a beefy 12 KW per vehicle and advanced integrated inverters. They will be early adopters of the more rugged, lower-cost "switched reluctance" traction motor options and in-wheel motors and corner units. For more see the IDTechEx reports, Electric Motors for Electric Vehicles 2012-2022, Inverters for Electric Vehicles 2012-2022, Electric Buses and Taxis 2012-2022, and Industrial and Commercial Vehicles 2012-2022.
Also attend Electric Vehicles Land, Sea & Air Europe 2013.