Pure electric cars are a disaster. On-road pure electric cars continue to sell at a level barely above one quarter of the sales of pure electric golf cars or a tenth of pure electric forklifts. Those golf cars are profitable but in a saturated market and, because that business is going nowhere, Ingersoll Rand is thinking of selling subsidiary Club Car, according to the Wall Street Journal. Club Car is the world's largest golf car manufacturer. It appears that Ingersoll Rand has too many lackluster subsidiaries and too little synergy between them according to activist investors. However, that is a pleasant world compared to pure electric on-road cars with over 100 companies missing plan while heroically absorbing Olympian losses, some even selling the cars at less than the cost of the traction battery alone.
The two problems are price and range. A third problem of lack of charging stations on the journey and at destination might go away if range was fixed. Unfortunately, there is too much work on infrastructure, interfacing with the smart grid, influencing user behaviour, legislation and other external factors and too little on fixing the real problems, so even major car companies continue to launch pure electric cars with only 100 miles range, BMW and Volkswagen being the latest culprits. The benchmark is 150 miles range as exhibited by the Kleenspeed car from Silicon Valley announced in November 2012 and a number of cars and other pure electric on-road vehicles that went before, but even that is not enough for most of us.
There will be a multiplicity of advances
The popular view is that we must wait for the billions being spent on battery technology to pay off, notably by the Japanese and Koreans who are way ahead in investment and market success. However, as with most other things in life, it is more likely that a multiplicity of advances plus Apple-like inspired design - notably absent so far - will save the day.
The good news here is that everything about an electric car is facing total change. Different materials for bodywork, structural components leading to smart skin, laminar electrics, printed electronics and totally new components are coming along.
T-Ink Inc. has printed, laminated then molded electrics in cars, starting with the Ford Fusion that will be offered as pure electric, hybrid electric or conventional. That can save up to 40% in weight, space and cost while improving reliability, since there are moving parts are eliminated and the unit becomes a sealed, entirely solid structural component. The new printed technology first appeared as the overhead control cluster so thin that the ceiling panel can be raised.
Figure 1. Part of a T-Ink printed and laminated overhead control and lighting cluster in the new Ford Fusion car. 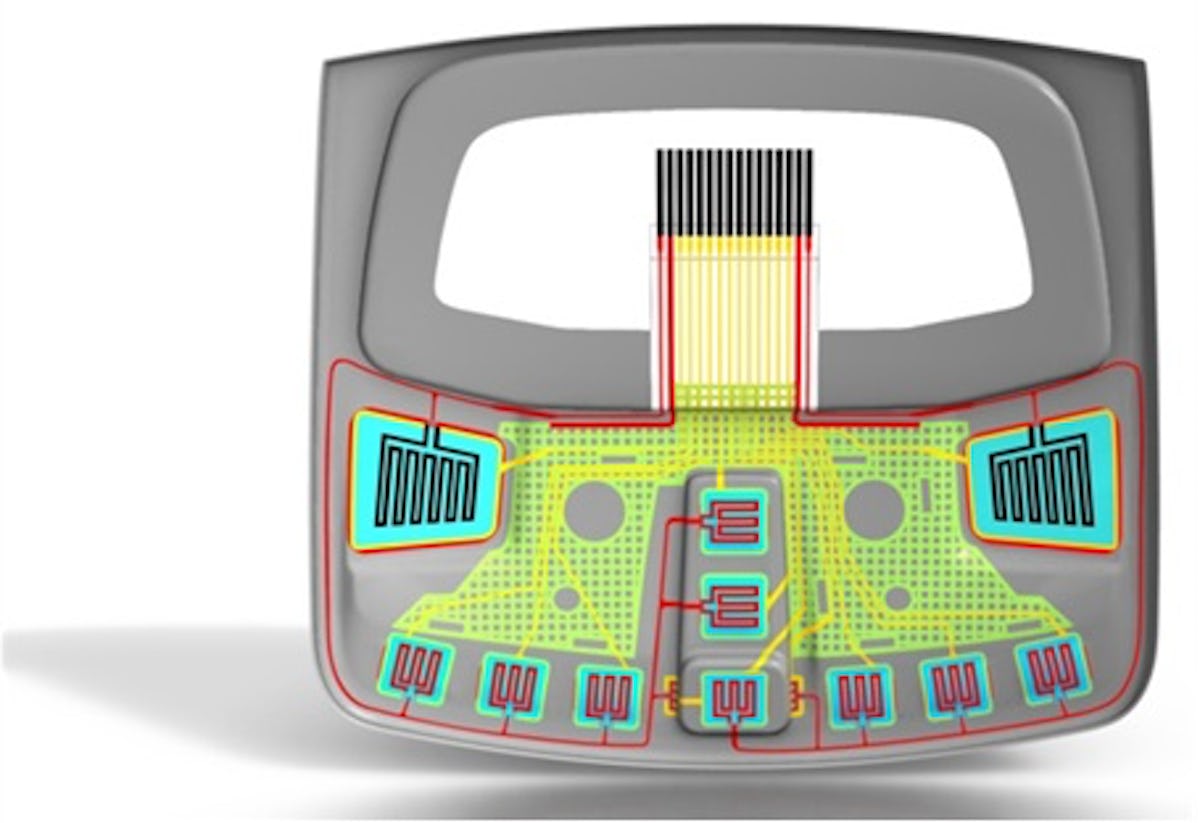 event, December 2012.
Radically new components will soon include silicon carbide and gallium nitride power semiconductors replacing silicon. Supercapacitors may replace batteries. After all, The Bolloré Pininfarina pure electric Bluecar has added a large supercapacitor in 2012 to improve performance and lengthen battery life and such a move can even reduce the need for a battery or increase range by making accessible more of the energy stored in the battery. The 2012 Mazda pure electric sports car does the same. The Riversimple fuel cell car in the UK has the lithium-ion battery completely replaced with a supercapacitor as have the MAN hybrid bus and Sinautec pure electric buses, all giving lifetime, cost over life, performance and other benefits. The electrics and electronics is growing to exceed 50% of the cost of an electric car, so improvements here are very important - one being the incorporation of circuitry into motors, batteries and range extenders, rather than having it in separate boxes.
Supercabatteries, energy harvesting shock absorbers
The half way product, the supercabattery, particularly the "lithium ion capacitor" version may have a place in cars, improving range and performance: some new developers certainly think so. Multiple energy harvesting will become commonplace with electric cars, probably including the energy harvesting shock absorbers that are first being launched in larger vehicles where the business case is stronger. Small wind turbines and the new solar flags may automatically appear when the electric car is parked. Eventually, thermoelectric harvesting may work on hot batteries and motors. Meanwhile it can work on the hybrid engine and its exhaust. In short, there is a deluge of totally new technology coming along. Although cars are usually late in adopting new EV technology compared to air, marine and large on-road electric vehicles much will appear in cars in due course. Combine that with better aerodynamics and more efficient powertrains and 3-400 mile range for affordable cars should become mainstream in about ten years. That may possibly be the tipping point to get sales to take off. With almost no correlation between questionnaires and the subsequent behaviour of respondents, we shall just have to wait and see.
On the other hand, on-road pure electric microcars are simple. Donald Wu in Taiwan, making the world's pure electric power chairs and three- or four-wheel scooters for the disabled or obese, may be right in saying that they are best made by small businesses like his own.
Ten year trends
No one can be sure what this myriad of changes will provide in ten years from now, when batteries may have up to three times the energy density, but probably less in cost improvement. With a few breakthroughs in components and responsive local manufacture of cars that may be fashion items, electric microcars may also see major success by the end of the decade or sooner. The Renault Twizy is a sign of the future but it is open to the weather and an expensive offering from a major car company.
Meanwhile, Toyota, with maybe $27 billion in electric vehicle sales due to its global leadership in hybrid cars and pure electric forklifts and its leading position in electric buses, seems to be the one major company reading the market correctly. It has long said that pure electric car technology is not ready for prime time in volume production but hybrids should be made of every conventional model. The IDTechEx report "Electric Vehicle Profitability 2013: Where, Why, What Next" (www.IDTechEx.com/evprofit) analyses all this in more detail and predicts the outcomes.
Hybrid cars are successful
Hybrid cars are altogether a better picture, with Toyota probably in profit with the Prius and making well over one million hybrid on-road cars in 2012, way ahead of anyone else. There is now scope for niche and volume successes in hybrid cars whereas there is only scope for niche success in pure electric cars, the Tesla Roadster and Model S being the main examples. Tesla has investment and collaboration from both Toyota and Daimler, getting its costs down and credibility up, and its Roadster and Model S are both highly desirable, ground-breaking products. Indeed, Tesla is currently in positive cash flow according to the Wall Street Journal. Tesla cars have over 200 miles range but are niche products due to price.
The Fisker Karma hybrid car intended to be a high-priced niche designer item and it has attracted major investment. Fisker took many risks in parallel, including use of the battery from start-up A123 Systems, which then had to recall defective product and seek radical financial restructuring as an alternative the Chapter 11. The Wall Street Journal spelt out the whole sorry story recently under the heading, "Its Battery Drained, Fisker Hunts for Partner". Fisker may find this difficult as various reports have criticised the poor gasoline range and other design shortcomings. Wrightspeed, a start up in Silicon Valley with capacity in medium-sized hybrid truck retrofit is similarly dependent on A123 while in fund-raising mode. There are lessons here: do not take too many risks in parallel when you start a business or a project. However, hybrid electric vehicles by land, water and air are here to stay and the technology of their range extenders is rapidly changing with huge benefits as detailed in the IDTechEx report, "Range Extenders for Electric Vehicles 2012-2022" (www.IDTechEx.com/range) that is regularly updated as the situation changes.
For example, at the "Electric Vehicles Land, Water, Air" (www.IDTechEx.com/evEurope) event in Berlin, 17-18 April, the German DLR Aerospace Research Centre will speak on, "Free Piston Range Extenders Inherently Generating Electricity".

I agree with the thought that we are in the time of the hybrid car. The purely electric ones still have to wait, due to prices of the current batteries, its reduced lifetime at 100% capacity , and the short average duration per charge. I believe, however, that the adoption of technologies such as in- wheel-motors, can provide a significant weight reduction. I think it will be a much more peaceful and natural path for those who embrace hybrid technology, because they can gradually decrease the size of internal combustion engines, as far as the batteries have reduced their costs and increased their capacity and durability.