Robotic agriculture: the battle between the big and the small

Agricultural robotics can upend several commonly-held notions. Amongst them is the idea that big is better. In practise this has translated into ever larger and more powerful agricultural machinery. This makes sense because a big machine amplifies the capabilities of the skilled driver, dramatically boosting its productivity. This notion may however be about to experience a fundamental change. The reason is that the driver can now finally be taken totally out of the equation.
The IDTechEx Research report Agricultural Robots and Drones 2016-2026: Technologies, Markets, Players develops a detailed roadmap of how robotic technology will enter into different aspects of agriculture, how it will change the way farming is done, how it becomes the future of agrochemicals business and how it will modify the way we design agricultural machinery.
This report provides detailed technology roadmaps, technology- and territory-segmented ten-year market forecasts, and comprehensive interview-based company profiles. Overall, IDTechEx Research forecasts that agricultural robots and drones will reach $12bn by 2026.

Agricultural vehicles have been at the forefront of developing and adopting autonomous navigation technology. Indeed, more than 320 k tractors equipped with autosteer or tractor guidance technology will be sold in 2016 alone, rising to 660 k/year in 2026. These tractors use RTK GPS technology to autonomously follow pre-planned paths with cm-level accuracy. This makes agriculture the largest adopter of autonomous navigation.
The industry is already evolving. Leading tractor companies worldwide have already demonstrated master-slave or 'follow-me' unmanned autonomous tractors or load carts. In these arrangements, a manned operator supervises the movement of the leader tractor with others following suite.
This technological evolution will further the notion that big is better because it enables further amplifying the productivity of the skilled driver via multiple slave or follower vehicles. This arrangement will find increasing use in large-scale crop field farming.
Fully and unmanned autonomous tractors will be the next evolutionary step. Multiple semi-commercial prototypes have already been demonstrated by leading agricultural machinery companies.
The technical challenges are largely resolved. Here, the tractor becomes equipped with a variety of overlapping sensors such as LIDAR, RADAR, and sonar to provide autonomous navigation in the absence of GPS signal together with collision avoidance.
Technology costs are currently high but the largest hurdles are to be found in the lagging regulatory framework and the farmers' desire to stay in charge. These will all inevitable change particularly as the farming population further ages across the globe.
Overall, IDTechEx Research forecasts in Agricultural Robots and Drones 2016-2026: Technologies, Markets, Players that sales of fully autonomous tractors will start only from 2021/2022 onwards, reaching more than $200m in 2026. 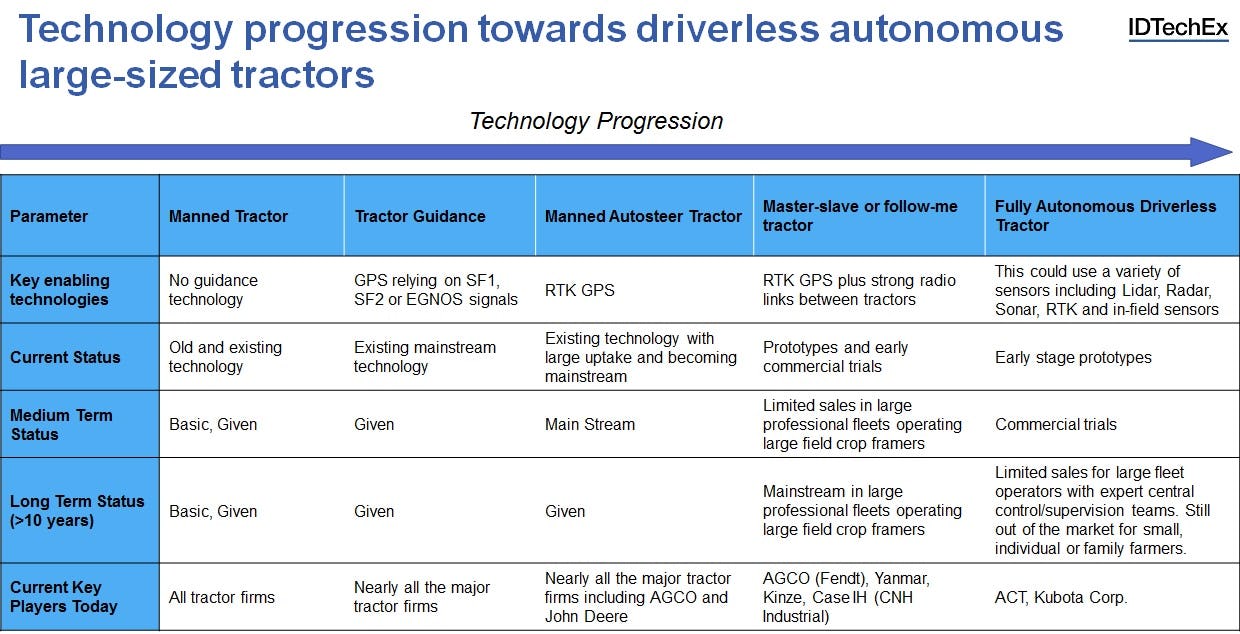 The advent of mobile agricultural robots will create the notion that small, light and slow is good. In this vision, few heavy, fast, large and manned tractors become replaced by, or complemented with, many light, slow, small and unmanned robots.
Here, the lightness means no soil compaction, thus increasing the useful land in each farm by as much as 3%, slowness means more attention paid to each plant therefore better data and more precise plant-specific action, and smallness potentially means low cost.
Cost is naturally a critical parameter here. This is because large and fast machines are more productive. This means that these new classes of agricultural robots will need to be lower cost by as much as 24 times to make economic sense. This requirement will limit mainstream adoption in the medium-term.

Fig 2. Transfiguration of agricultural machinery is underway. Source: IDTechEx Research www.IDTechEx.com/agri with images from Kongskilde Industries, Conpleks Innovations, Dorhout R&D, Australian Centre for Field Robotics
This is a radical shift in the way we envisage agricultural vehicles. The emerging alternative vision is still in its infancy but the direction of development is clear. These are already hundreds of mobile agricultural robots in existence. With the exception of 50 or so small-sized ones, most are however still in the research or semi-commercial trial stage.
The costs are currently high too, mostly because such mobile robots requires multiple sensors to provide safety and autonomy even in the absence of GPS signals. The early evidence is that farmers do not yet trust them and indeed are not willing to pay extra. This means that some models are being stripped down to the bare minimum required with seemingly simple features such as even end-of-row navigation in orchards removed.

The machines are still not completely reliable despite the technology, at the discreet component and software level, being ready and accessible. This manifests itself in the business models of many companies seeking to commercialize such or similar robots. They become service providers so that the farmers do not bear the entire risk burden and so that skilled operates run the show in case there is a technical fault causing downtime.

All these will change in the course of the coming decade. Despite being renowned for conservatism, farmers often do take in technology. This is evident in global statistics showing how output has grown despite falling employment in the agricultural sectors, which is partly due to the spread of mechanisation in farming. The real effect of this conservatism however is that potentially revolutionary technologies become evolutionary ones.
This new notion of swarms of unmanned robots will also be no exception. Here too the change will be gradual, both technologically and commercially. In fact, as the technology improves, the value proposition will have to be proved at every incremental step.
This is not yet done as only a few field trials have taken place and here the experimental clock is inevitably limited by harvest seasons, further slowing down the adoption process. Furthermore, many agricultural robots today work well in specially constructed environments, suggesting that perhaps full-scale adoption requires a modification in the way farms are laid out. This will proceed at painstakingly slow rates, further helping turn the revolution into an evolution.
To learn more about agricultural robots and drones and the future of farming read the IDTechEx report "Agricultural Robots and Drones 2016-2026: Technologies, Markets, Players" at www.IDTechEx.com/agri. Here, a detailed technology roadmap outlining how robotic technology will enter into different aspects of agriculture, detailed territory-segmented forecasts showing the market future of different agricultural robotic and drone technologies, and detailed interview-based profiles of leading players.