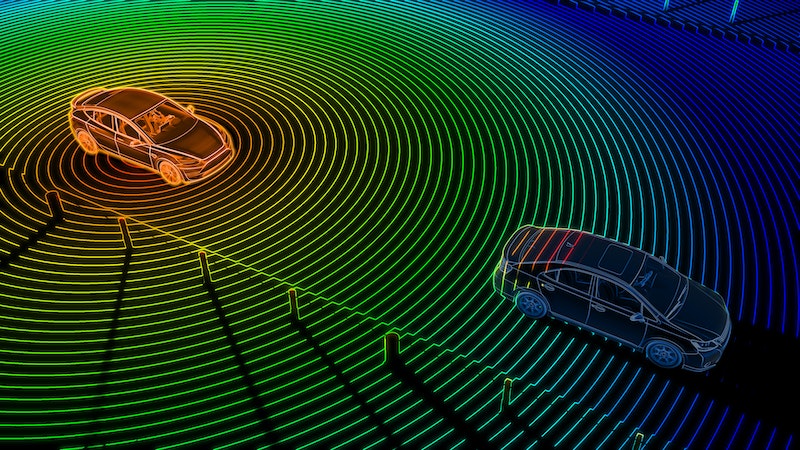 Analysts at the technology consulting firm IDTechEx are tracking more than one hundred companies that develop 3D lidar modules. The tally was at 107 and counting by November 2019, and most companies position their business as automotive Tier 2 suppliers. The lidar market is very dynamic and some players are making excellent progress towards launching automotive grade products. The Valeo Scala® product by Valeo, a French automotive Tier 1 supplier, is already used in the Audi A8 production vehicle. This is a mechanically rotated lidar with few (x4) laser sources.
This article presents insights from the new IDTechEx report titled "Lidar 2020-2030". After a period of dedicated research, expert analysts from the autonomous vehicles team at IDTechEx published a comprehensive report on lidar technologies and markets. The analysts who conducted this research have significant experience in laser physics and semiconductor physics research, in addition to experience in advising multi-billion dollar corporations on business growth and technology strategy. 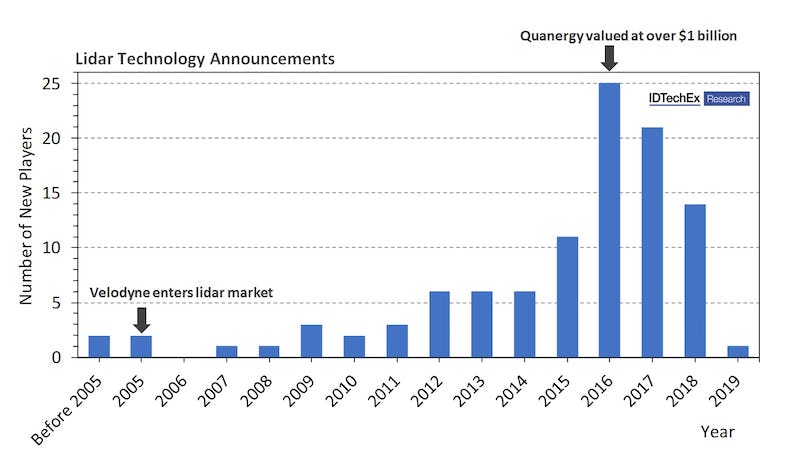 New companies announcing the development of lidar technology for the automotive market. Few companies enter this market today as it is saturated with more than a hundred 3D lidar technologies. Source: "Lidar 2020-2030" IDTechEx report

Lidar is a sensor technology that enables autonomous vehicles to see the world, make decisions and navigate. 3D lidar systems scan beams of light to create a virtual model of the environment. Reflected light signals are measured and processed by the vehicle to detect, identify, and decide how to interact with or avoid, objects. Most car manufacturers consider 3D lidar essential for the safe operation of autonomous vehicles and have partnered with lidar technology suppliers. Tesla, the company where Elon Musk is the top shareholder, is a notable exception in rejecting lidar.
The best known player is Velodyne, the American company that entered the lidar market in 2005 with its iconic HDL-64 rotating mechanical lidar for autonomous test vehicles. Velodyne later launched the PuckTM product line, which includes compact mechanical lidars for diverse industries. Velodyne progressed towards micro-lidar array (MLA) technology to maintain a strong position in the automotive lidar market, which is evolving beyond the established rotating mechanical technology. Velodyne's first MLA product, VelarrayTM, was announced in 2017, and this was followed by VelaDomeTM in 2019. VelaDomeTM is designed for close-range operation, while VelarrayTM offers long-range object detection. The new non-rotational technology for automotive employs 128 channel VCSEL light source. It is based on 905nm ToF. It has APD detectors. The scanning mechanism is not yet disclosed and is securely guarded, but we understand it to be an electromechanical mechanism. Velodyne has recently launched even a $100 small lidar (Velabit) offering 60deg and 10deg horizontal and vertical FoV, respectively. The lidar rotates at 10-20Hz and, it is claimed, can see 100m@80% reflectively. This is to open markets beyond automotive.
LeddarTech, the Canadian company founded in 2007, is another big name in this market. While LeddarTech offers lidar modules, the company's core technology is the LeddarEngineTM system on chip (SOC) and software, and this is the focus of their long-term technology strategy. The SoC is designed for ToF lidars and can be driven either in a master or a slave mode (in case there is another clock master in the system such as in a MEMS lidar). The SoC will be made on a 25nm technology. The company recently launched the LeddarTM Pixell 3D flash lidar module, which is optimized for proximity detection and blind spot coverage in urban environments, and this strengthens the company's position in the autonomous shared mobility market segment.
Quanergy, a Californian start-up founded in 2012, rose to fame by developing the world's first optical phased array (OPA) 3D lidar for the automotive industry. The company was valued at $1 billion USD in 2016, at a time when new players entered the automotive lidar market every month. However, in recent years, Quanergy has shifted their attention to non-automotive markets following challenges and delays they faced in the automotive industry. It is an important question as to whether Quanergy has made the right technology choices in its OPA system or not. The choice of 905nm brings the benefit of using a well-established light source and detector, but SiNx OPA platform might be slow and present significant heat management issues. The lack of a foundry ecosystem may also push Quandary to take on too many tasks.
One brightest young star in this market is Innoviz, an Israeli start-up founded in 2016 with the aim of developing and commercializing 3D lidar based on MEMS mirror beam steering. It counts Magna International amongst its investors. In the past three years, Innoviz accumulated an impressive $252 million USD and secured a contract with BMW to supply the InnovizOneTM product in 2021 for a BMW production vehicle. InnovizOneTM is positioned as an automotive grade MEMS-based lidar module. The question is now whether it will finally gain commercial adoption or not.
It might be pointing out a new player on the scene too: Livox. They are set up by DJI, the famous Chinese drone maker. They seem to be following the same strategy as DJI: offering a compelling price in order to drive others out and force an industry consolidation. This is a tempting strategy given that there are so many players and technologies today and that most offerings are too expensive and only promise future cost reductions. The lidar is also ToF operating at 905nm. Their Mid-40 lidar with 38.4deg FoV, 0.05-0.1 angular resolution and 260m range @80% reflective is priced at around 550-750 USD. It is using a rotating prism. The interesting point here is that DJI - thanks to its drone business - has excellent know-how and capability in designing the motors, which are often a cost and reliability bottleneck. They have already received a 5k unit order and last we checked they had completed 13k hours of reliability testing running 24/7. 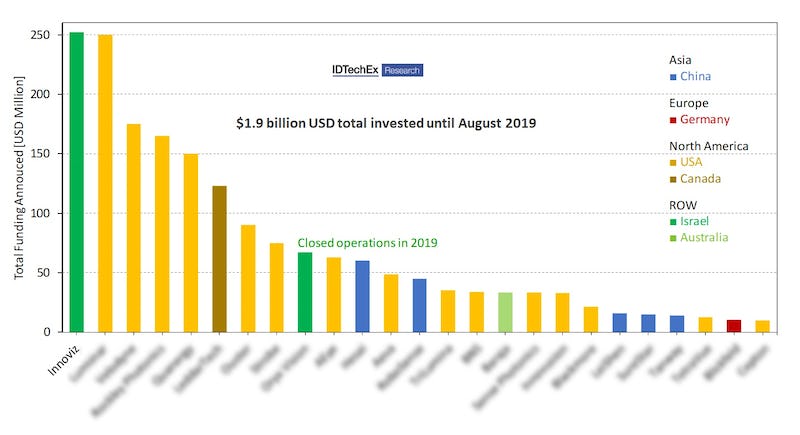 IDTechEx conducted a patent analysis and determined that 101 R&D teams developing automotive lidar technology have at least one related patent or patent application. However, when more than one hundred companies claim to offer unique 3D lidar technologies, complaints of patent infringement are inevitable.
In 2019, LeddarTech reported successfully defending one of their 72 lidar technology patents against a fellow Canadian competitor, Phantom Intelligence. While details of the settlement are confidential, the infringement case resulted in Phantom Intelligence becoming a customer of LeddarTech. More recently in August 2019, Velodyne filed patent infringement cases against two Chinese competitors, RoboSense and Hesai. Velodyne's complaint relates to their popular PuckTM product line. A US patent (US7969558) covers the 'surround view' lidar architecture, which includes multiple laser diodes and photodetectors within a housing rotated by a motor. Both RoboSense and Hesai offer similar rotating mechanical lidars, which the two competitors have imported into and distributed within the USA.

As competition intensifies in the automotive lidar market, some start-ups will not survive. Oryx Vision is the first high-profile casualty: the Israeli 3D lidar business closed in August 2019 despite having secured $67 million USD in funding. Oryx Vision publicly stated delays in the automotive industry as an important factor in the decision to end operations. We however think that the unusual and complex lidar architecture outlined in Oryx Vision's patents was the main reason. Oryx Vision described their unusual lidar design as 'coherent flash' technology, and it operates at a wavelength of 10 micrometres that common and cost-effective lasers cannot produce.

What happens to the lidar companies that succeed in securing a contract with a global car manufacturer? Major automotive OEMs prefer to obtain lidar technology for their autonomous production vehicles via trusted Tier 1 partners. The general trend in the automotive industry is that Tier 2 suppliers develop new lidar technologies, while Tier 1 suppliers optimize these products for high-volume production. For example, Valeo Scala® technology was originally developed by Ibeo Automotive Systems GmbH. Valeo developed Ibeo's lidar into a mass-produced sensor for Audi. Similarly, Innoviz has partnered with Magna, the Canadian Tier 1 supplier, and Magna will deliver automotive grade lidar modules to BMW.
As a separate note that Ibeo is now developing a 905nm ToF lidar using SPAD detectors which require multiple measurements to build up the picture but give out a digital signal. Their design includes a VCSEL array and an SPAD array (12800 pixels and emitters). They have three ASICs which allow them to control the system and generate specific patterns on the VCSEL without the need to flash the entire scene. That enables them to boost the range to 250m even though the system architecture and components are similar to a flash lidar. The IC placement and assembly are also relatively straight forward allowing high level of automation. In general, this puts them on a good cost-reduction path which may mean that the lack of a scanning mechanism could be compensated by multiple lidars. They are working with their investors ZF Friedrichshafen AG.
However, a minority of Tier 1 suppliers and automotive OEMs develop their own lidar technology. IDTechEx interviewed Continental, the German Tier 1 supplier, about progress in developing the HFL110 3D Flash LIDARTM product, which builds on their expertise in advanced driver-assistance systems (ADAS). Continental expects the adoption of 3D lidar in the automotive market to accelerate in the second half of the coming decade.

Can the Lidar Business Landscape Consolidate?

According to the market model developed by IDTechEx, a winning lidar technology cannot emerge within the next decade. The ideal 3D lidar technology depends on the type of vehicle, its level of autonomy, and its typical operating conditions. According to the market forecast calculated by IDTechEx, the global market for 3D lidar in level 3+ autonomous vehicles grows to $5.4 billion by 2030, and MEMS lidar emerges as the largest market segment during this time period particularly thanks to their readiness level. This is not to say that MEMS are not without challenges including the need to balance size, resonant frequency, and angle of the mirror, and of course automotive-grade reliability. For a comprehensive analysis of more than 100 lidar technology suppliers, access the new IDTechEx report titled "Lidar 2020-2030" by visiting www.IDTechEx.com/Lidar.
Learn more at the next leading event on the topic: Electric Vehicle Materials Europe 2020