The Window of Opportunity for Plug-in Hybrids is Closing

Plug-in hybrid electric vehicles (PHEVs) are an interim product. PHEV cars are particularly valuable to traditional automotive companies buying time as they figure out how to make desirable battery-electric cars the end game. Manufacturers continue to launch many PHEVs but these are more complicated than alternatives, and large recalls are occurring.
IDTechEx have an overview report with forecasts, "Electric Vehicles: Land, Sea and Air 2021-2041", which explains why PHEV potential is now limited. Ten years ago, IDTechEx first forecasted 2024 as the upfront price parity date for small BEV cars vs. internal combustion engine (ICE) cars. The new report reveals this estimate is still on track or can be met earlier in top auto markets. 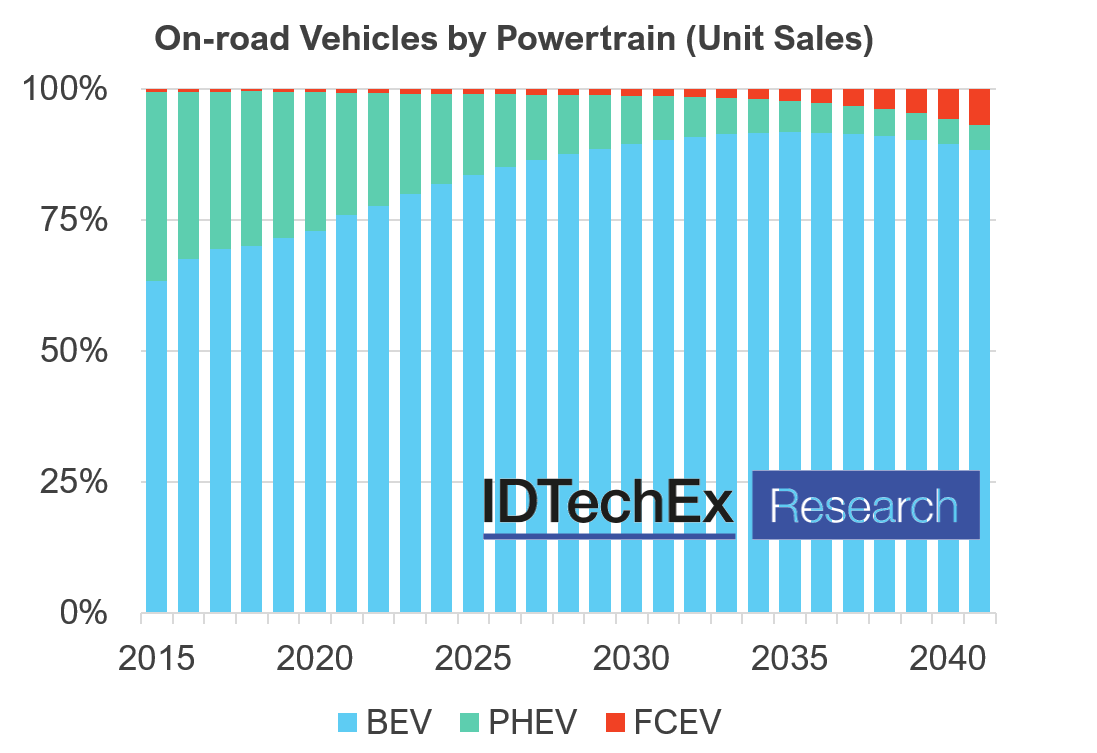 Many people buy PHEVs for the subsidy but chose never to plug them in, so although they have the potential to reach under 50g CO2 per km, real-world gasoline consumption and CO2 emissions can be far higher. This led the UK government to conclude that there are better ways to save the planet. The UK withdrew the subsidy and PHEV sales collapsed. China is another region where PHEVs increasingly take a back seat. In September, giant BYD sold 12,212 BEVs but only 6,319 PHEVs.
In a study of over 100,000 PHEVs, Fraunhofer ISI and the ICCT finds the UK PHEV problem to hold globally and across models. Their white paper, titled "Real-world usage of plug-in hybrid electric vehicles - Fuel consumption, electric driving, and CO2 emissions," finds PHEVs real fuel consumption and CO2 emissions are two to four times higher on average than in test cycles such as NEDC or WLTP. Policymakers use these test values to denote the climate impact of vehicles across fleets and to shape policy. The authors therefore recommend that actual practice drives PHEV subsidies in the future and that governments insist on smaller engines and longer electric range for PHEVs as seen in the new BMW X5 hybrid.

Following dieselgate, manufacturers keep re-looking at their claims and, after claiming that the Evoque P300e and Discovery Sport P300e plug-in hybrid models put out as little as 32 and 36g CO2 per km, respectively, Land Rover has recently halted sales in order to reclassify their emissions ratings.
There is more to go wrong in a PHEV, and the batteries face challenging high-voltage duty cycles. BMW again has a problem with the high-voltage batteries in plug-in hybrid vehicles. There is an increased risk of fire in several series. The total number of plug-in vehicles involved is 26,700 worldwide. Ford stopped sales of the Kuga PHEV in August, due to concerns about battery overheating and it is recalling 27,000 of them.

Despite all this, new PHEVs continue to be announced by those failing to compete with Tesla and other BEV leaders. Porsche has added two more PHEV options for the revised Panamera. Companies are coming in just as others are exiting. In Europe, this year's ŠKODA SUPERB iV plug-in hybrid executive car is its first entry into PHEVs.
VW Group and FCA currently have the most PHEV models but VW is doing a screeching U-turn into BEVs with every chance of success. The head of VW talks of the world's largest company becoming Tesla, VW, or Apple.
As of December 2019, the IDTechEx report "Electric Vehicles: Land, Sea and Air 2021-2041" reveals cumulative sales of PHEV cars reached over 2.4 million units, representing around 34% of global BEV + PHEV sales - a share which is in decline. China takes the lion's share of PHEVs, with 767,900 units, followed by the US with 567,740, and the UK with 159,910 (mainly from when its government fell for the false argument).
Tesla's bullish objective is selling 20 million BEVs in 2030 into a car market that may struggle to reach 90 million at that time. The runaway success of 48V mild-hybrid upgrades of existing ICE models with no technical issues (because the technology is trivial) could impede PHEV sales in the short term. IDTechEx calculate 48V non-plug-in hybrids reaching the 20 million level in 2030. More information can be found in the new IDTechEx report, "48V Full Hybrid, 48V Mild Hybrid, 48V BEV Cars: Markets, Technology Roadmap 2021-2041".
For more information on "Electric Vehicles: Land, Sea and Air 2021-2041", please visit www.IDTechEx.com/EV or for the full portfolio of EV research available from IDTechEx please visit www.IDTechEx.com/Research/EV.
IDTechEx guides your strategic business decisions through its Research, Subscription and Consultancy products, helping you profit from emerging technologies. For more information, contact research@IDTechEx.com or visit www.IDTechEx.com.