Replacement of Aircraft Makers will be Brutal 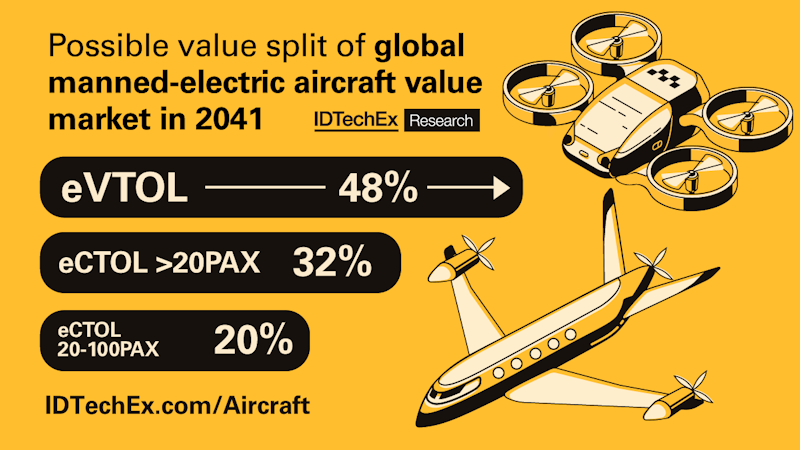 The replacement of aircraft makers will be brutal - no not Airbus and Boeing, the other big names, starting with those making light aircraft, then those making regional aircraft. Stuck in the past, these cannot make what is now needed. It is therefore battery eVTOL startup Archer Aviation that just gained a $1 billion order from United Airlines eager to get customers to airports faster, zero-emission. United has an option on $0.5 billion more and the prospect of a fleet of 200. It is an investor and it has a collaboration agreement. Archer is floating at a scorching $3.8 billion.
The IDTechEx report "Manned Electric Aircraft: Smart City and Regional 2021-2041" is the first to forecast electric aircraft for 20 years ahead, while reflecting the realities of how the huge new $30 billion market that is identified will be structured.
The world's largest courier company UPS has ordered 10 Beta Technologies eVTOL for delivery 2024. UPS has an option on 150 if satisfied. They will hop freight directly between UPS premises in industrial parks, something previously impossible. Innovating like Tesla, dark horse Beta in Vermont slings the battery low for extreme stability as it is half the total aircraft weight. See the IDTechEx report, "Air Taxis: Electric Vertical Take-Off and Landing Aircraft 2021-2041" for full analysis. For example, it assesses how newcomer eHang delivers battery eVTOL as air taxis and firefighters with eHang expecting a permit for autonomous passenger eVTOL flights in China this year.
Bailie Gifford of Scotland, continuing to make a fortune out of being a major Tesla shareholder, has invested in the new eVTOL makers Joby of the US and Lilium of Germany, light aircraft usurpers newly enjoying a combined valuation of over $3.6 billion. Light aircraft newcomer Volocopter of Germany has a >0.6 billion valuation. Toyota, Intel, and Tencent strongly invest in these insurgents.
Even for conventional takeoff and landing, air taxi and pilot training companies now have to buy battery-electric fixed-wing aircraft or lose competitiveness. The best born-electric battery fixed-wing aircraft have half to one-fifth of the operating cost. They are so silent that they may be allowed to operate 24/7 giving a multiple of the usual payback from that alone. Only they have fast rate of climb. They are the Teslas of the skies.
Newcomer Bye Aerospace, with the performance of the Tesla S Plaid in range, silence, acceleration, and 99% reduction in engine parts, has over 720 orders. Leading the surge, its 2 and 4-seater battery aircraft prices have even risen to $489,000 and $627,000 this year because they remain the economic must-buy. You cannot easily copy such sleek composite-material battery aircraft and their software. Entirely designed to purpose, they use state-of-the-art electrics with much more to come. Brand enhancement is enjoyed by an operator when it buys the zero-emission future in this way. The longer glide path, simplification, and better control will reduce the light-aircraft death rate.
Raghu Das, CEO of analysts IDTechEx adds, "Fossil-fueled cars will trend to valueless as they are banned in more and more places. Something similar will happen with quality battery-electric light aircraft enjoying less depreciation. The radically new capabilities will grow the market even beyond near-silent eVTOL. Neglect has meant that the General Aviation market has collapsed to one-fifth of its peak 50 years ago but the industry now has the Goldilocks scenario of needing to replace those old aircraft and having electric aircraft that bring back affordability while adding new mission capabilities. We estimate that the general aviation market will therefore grow over tenfold by 2041.
Long before that, fossil and bio-fuel will be gone. As soon as authorities see the noise, land, and air pollution is avoidable they will ban or severely restrict the fossil fuel options. Sweden and Norway have already set dates."
The IDTechEx report, "Manned Electric Aircraft: Smart City and Regional 2021-2041" roadmaps the technology and forecasts the detail of electric aircraft demand leaping from near-zero to a $30 billion in 2041. Much earlier, the famous names in light aircraft will be toast.
For more information on this report, please visit www.IDTechEx.com/aircraft, or for the full portfolio of Electric Vehicle research available from IDTechEx please visit www.IDTechEx.com/Research/EV.
IDTechEx guides your strategic business decisions through its Research, Subscription and Consultancy products, helping you profit from emerging technologies. For more information, contact research@IDTechEx.com or visit www.IDTechEx.com.
Top image: Possible value split of global manned-electric aircraft value market in 2041. CTOL= conventional takeoff and landing. Source: IDTechEx