Electrification of the air industry is moving on apace. Chicago International Airport switched to largely pure electric ground support equipment GSE six years ago, preempting environmental regulations requiring airports to clean up their act. Since then, modest Federal funding has assisted in electrification of GSE at many US airports. Hybrid buses are commonplace at airports worldwide and there are some pure electric buses at some airports.
DLR German Aerospace Center is developing electric GSE with fuel cell range extenders plus electric nosewheels so large arcraft can dispense with tugs and power up their jets the instant before takeoff saving huge amounts of noise and money. Boeing's largest competitor EADS has flown a pure electric stunt plane in France and Germany as its first move into electrification of aircraft to improve safety, silence, cost and environmental credentials. Recently, ENFICA-FC in Italy has successfully flown a fuel cell powered two seater aircraft.
Boston Logan International Airport handles over 25 million passengers yearly. This is large but not at the level of Atlanta or Chicago. Now Boston Logan is taking a more comprehensive view of electrification than almost any other airport. This includes powering most of its electric vehicles from photovoltaics on its buildings and introducing experimental new designs of electric vehicle from the other side of the world. Tenant Delta Airlines is also showing leadership as we shall discuss in a subsequent report.
Firstly, new diesel-electric hybrid and compressed natural gas buses are being delivered to the airport. Thirty-two of the buses are diesel-electrics, and eighteen run on compressed natural gas. The diesel-electrics are articulated and sixty feet long. The CNG buses are smaller. They will all be running by 2013. The cost was nearly $35 million, an expense that was approved by the Massachusetts Port Authority board. The board has applied for a federal grant to cover 75% of this cost. The Voluntary Airport Low Emissions program assists in finance for low emission vehicles for airports in designated air quality areas: it has been functioning for some years.
MassPort CEO Thomas Kinton Jr. said of the project, "Not only will the new unified bus system improve air quality through alternative fuels, it will reduce emissions by cutting congestion and dwell times at the terminal curbs."
Not content with that, Boston Logan will now try new mass transit technology never before seen in the USA and somewhat unproven. The Massachusetts Port Authority (Massport), which operates Boston's Logan International Airport, decided to license the technology from KAIST on Jan. 24, 2011. 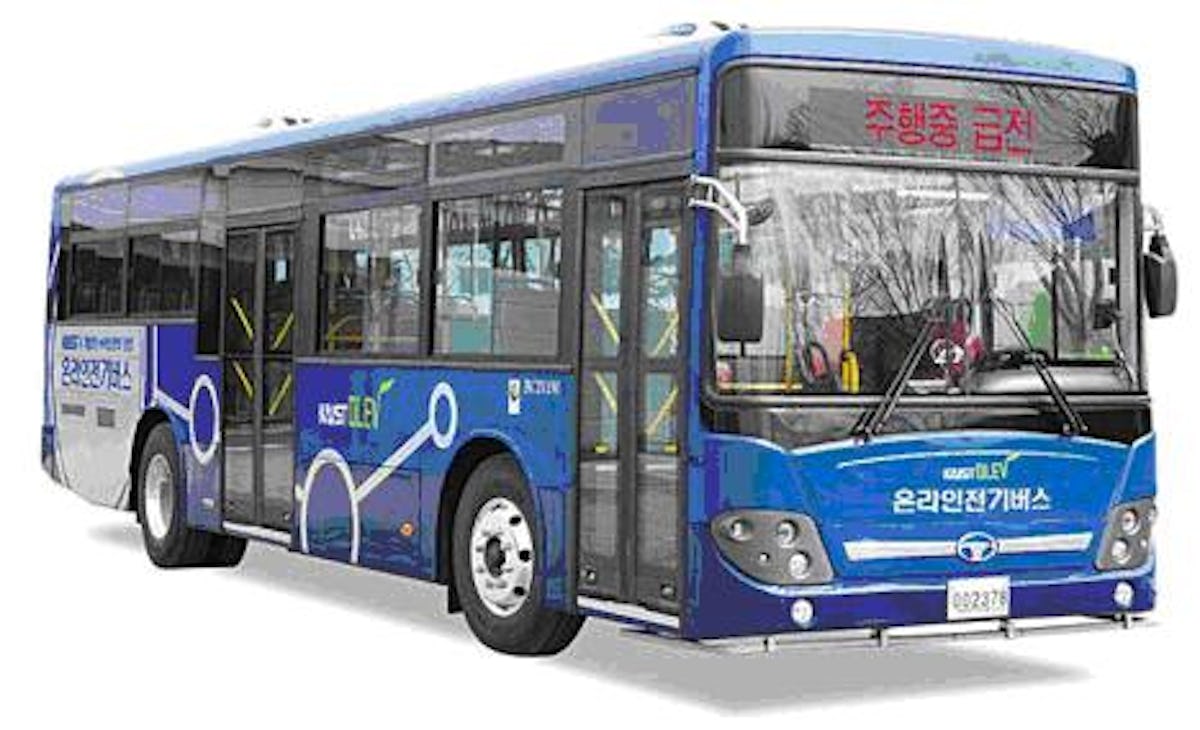 These Online Electric Vehicles, or OLEVs, are charged by wireless power supply strips embedded in roadbeds as they travel above. The system was named one of the 50 Best Inventions of 2010 by Time magazine, because, although inductive pickup can waste a large amount of electricity and has rarely been practicable on a near continuous basis, KAIST claims to have overcome most of the problems. Massport plans to purchase 60 OLEVs to replace all the buses at Logan Airport. The project is expected to be worth some $44million with each electric bus costing about $58,000. The vehicles will be assembled in the U.S. with KAIST receiving technology license fees. KAIST hopes the deal will lead to further exports to cities or airports in the U.S. and environmentally sensitive regions such as Europe. It is already in talks to supply the system to Park City in Utah.
Korea Advanced Institute of Science and Technology, KAIST first demonstrated its On Line Electric Vehicle system OLEV in 2009. It uses buried power cables in the road and a receiving unit in the EVs traveling on it. In this scheme, the pickup is continuous and the vehicle has no traction battery. If the OLEV charging method is applied to the public bus system in South Korea, the underground power lines would need to be installed on only 20% of the total bus route at places like bus stops, parking lots, and intersections, KAIST says.
KAIST achieved a maximum pick-up capacity of 62 kW/h, ie only 74% with an air gap height of 13cm from the road to the bottom of the vehicle because this is simply H Field magnetic field charging not resonant transfer of the energy. Nonetheless, the highly respected KAIST is working to make the OLEV a suitable business prospect. It has spun off a company written in lower case as "online electric vehicle co., ltd.," that will undertake business activities related to the OLEV project, including the IPR on power supply and pick-up devices, parts and accessories and commercial promotion." Its roadmap is,
2011 Development of practical prototype technology
2012 Development of standard prototype technology for OLEV
2013 and beyond - Introduction of commercial product to market
KAIST OLEVs in 2010, Source KAIST 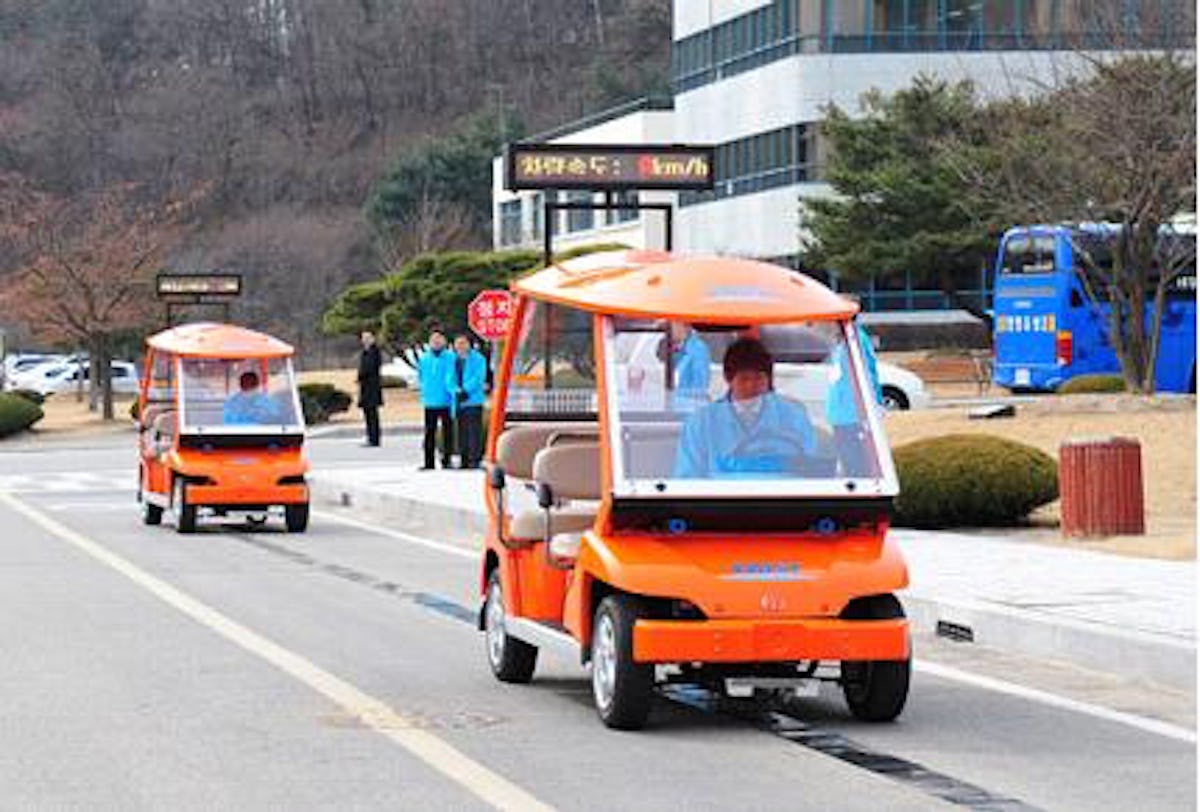 Seoul's zoo has a new tram with battery that is one-fifth the size of a typical EV battery and doesn't need overhead power wires to keep it charged. The prototype is the world's first electromagnetically-charged tram. Its batteries receive a continual power charge from power strips buried along the travel path.
The KAIST-built zoo train serves as a model for electric-powered buses and proximity charged trams that can operate without overhead cables.
Proximity charged tram, Source Library 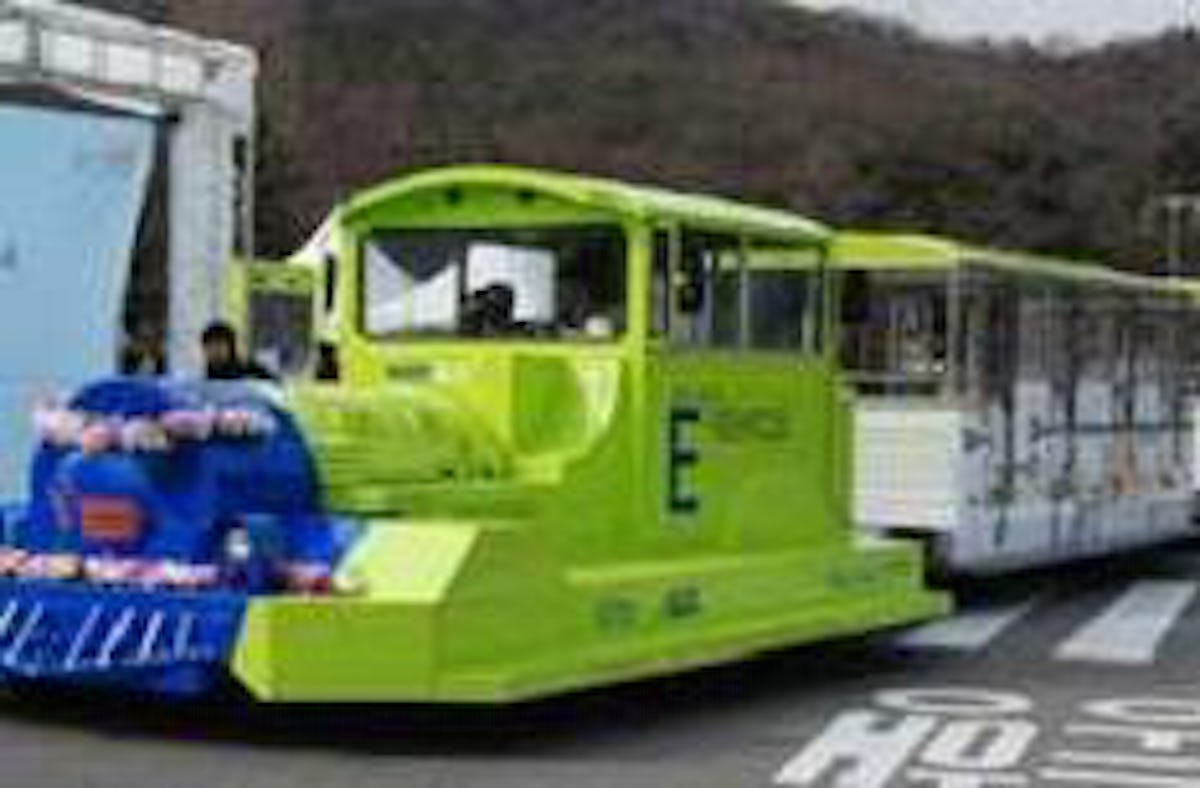 Boston Logan is one of the most energy-efficient airports in the United States and it is taking things further. Logan Airport is now using a 200 kW solar energy system which is expected to save roughly 3,500 barrels of oil each year. The 1,000 solar panels offset 5 percent of the total energy use of the Terminal B garage where they are installed on structural steel "trees". The Terminal B garage is also the first airport garage to be lit by LED bulbs. To see real-time how many kilowatt-hours of solar power the array is generating, check out the installer Broadway Electric's real-time tracking system. And according to Boston's local Channel 7 news, Logan has recently installed the largest solar panel of any public building in Massachusetts. The upgrades are part of more than $1 billion in spending that Massport, the airport's operating authority, has allocated for some 379 projects as part of the facility's 2010-2014 capital improvement plan. The budget places emphasis on energy conservation, green building and renewable energy. Massport's capital plan also includes investments to promote sustainability and a cleaner environment. The Terminal B Garage project includes the installation of photovoltaic solar panels on the garage roof and the replacement of existing lighting with LED lights in the garage, roadway and walkway.
The Consolidated Rental Car Facility is being designed to meet Leadership in Energy and Environmental Design LEED Silver certification standards by the Green Building Council. Improvements to the Civil Air Terminal building at L.G. Hanscom Field will also include a 57,000 kilowatt hour per year solar array. The airport is also equipped with 20 wind turbines that make the most of the facility's up-drafted air. Logan International's solar trend setting is aligned with the state of Massachusetts which is targeting public facilities to implement renewable energy strategies.
For more attend Electric Vehicles - Land Sea Air Europe 2011
to reflect its unique covering of the whole subject.
Also read the new reports Electric Vehicles 2011 - 2021 , Buses and Taxis 2011 - 2021 , Electric Aircraft 2011 - 2021 and Electric Vehicle Charging Infrastructure 2011 - 2021 .