Leaders in practicable fuel cells in electric vehicles by land sea and air include Intelligent Energy of the UK while DLR German Aerospace Center, EADS in Germany and France, ENFICA-FC in Italy, Mercedes in Germany and others are extending fuel cell use to manned aircraft, airport Ground Support Equipment GSE, mainstream cars and more.
They have similar power delivery to the alternative third generation range extender, the mini turbine of Bladon Jets, a Tata Motors Europe investment. BIMAQ of Germany is a leader in testing euipment for such hybrid power trains. There is probably room in the market for both, particularly when coupled to third generation lithium ion batteries such as lithium sulphur from Oxis Energy.
Researchers at Case Western Reserve University in Cleveland claim a breakthrough in the development of low-cost hydrogen fuel cells that one day could power electric cars. They say catalysts made of carbon nanotubes dipped in a polymer solution can outperform traditional platinum catalysts in fuel cells at a fraction of the cost.
The new technology can remove one of the biggest roadblocks to widespread cell use: the cost of the catalysts. Platinum, which represents at least a quarter of the cost of fuel cells, currently sells for about $30,000 per pound, while the activated carbon nanotubes cost about $45 per pound, a Case release said.
"This is a breakthrough," Liming Dai, a professor of chemical engineering and the research team leader, said.
Soaking carbon nanotubes in a water solution of the polymer for a couple of hours coats the nanotube surface and pulls an electron partially from the carbon, creating a net positive charge, researchers said. When placed on the cathode of an alkaline fuel cell, the charged material acts as a catalyst for the oxygen-reduction reaction that produces electricity by electrochemically combining hydrogen and oxygen. In testing, the researchers' carbon catalyst fuel cell produced as much power as an identical cell using a platinum catalyst. 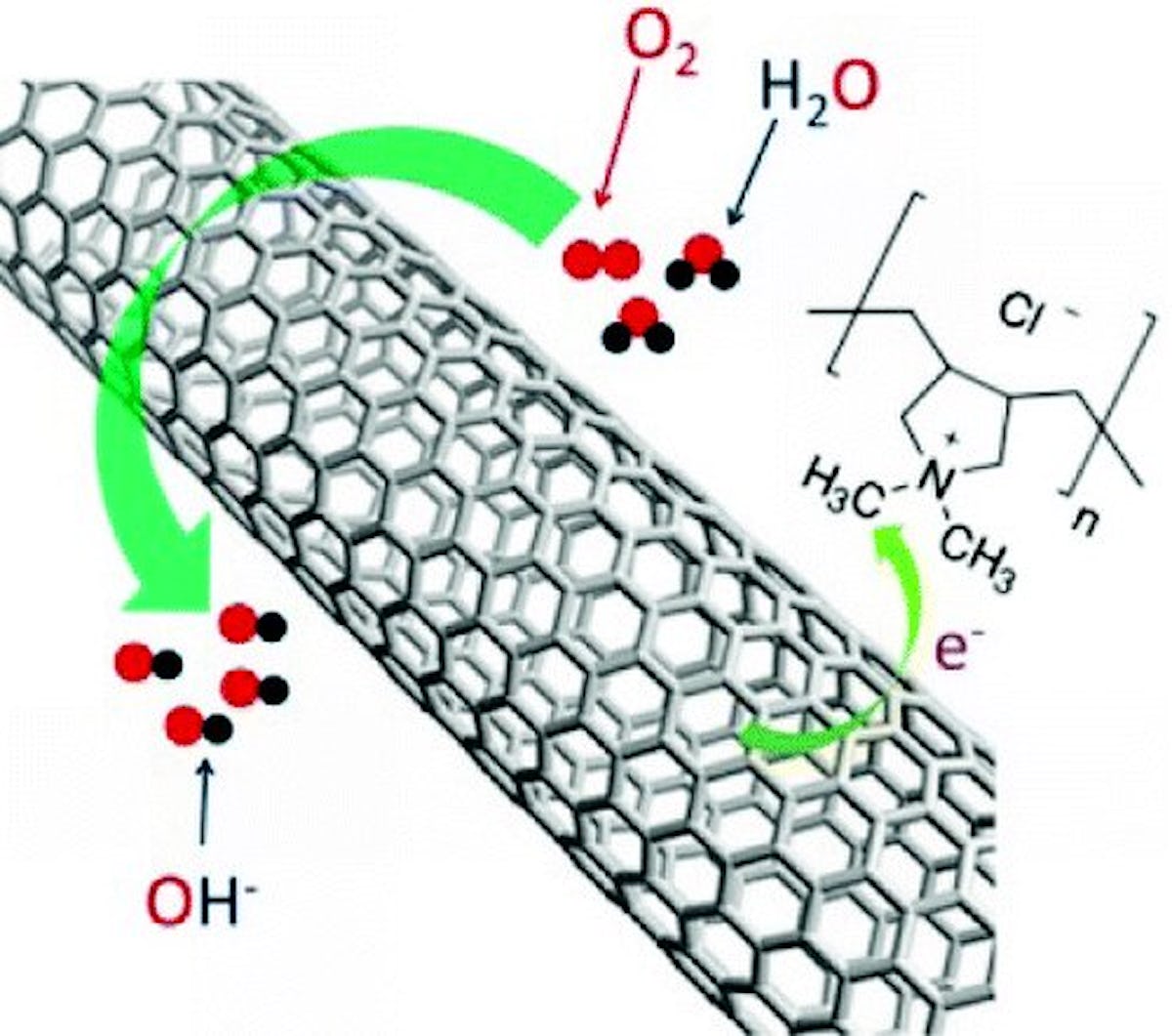 Source: Case Western Reserve University
Dai said he's confident his lab can increase the energy output of the new process.
"We have not optimized the system yet," he said.
One widely researched use for such cells would be to produce electricity to power an electric car, using hydrogen and oxygen from the air claims the University. The only emission from such a vehicle, researchers say, would be water.
According to a new RNCOS report "Fuel Cell Industry Analysis", extensive government support has been fuelling rapid growth in the fuel cell market. The global fuel cell market was expected to reach US$ 2.6 Billion in 2010, up from US$ 850 Million in 2009 according to the analysts. However, traction fuel celss in vehicles are only a part of this.
For more read: Electric Vehicle Traction Batteries 2011-2021 and Electric Vehicles 2011-2021 and http://www.upi.com/Science_News/2011/03/22/Researchers-claim-fuel-cell-breakthrough/UPI-73011300832974/#ixzz1IOPV7Tys.
For more attend Electric Vehicles - Land Sea Air Europe 2011
to reflect its unique covering of the whole subject.
Contact Teresa Henry at t.henry@idtechex.com if you wish to be involved in any way.