Fuel cells were originally considered to be replacements for internal combustion engines used in traditional vehicles and replacements for traction batteries used in pure electric vehicles. Unfortunately, they have proved woefully incapable of efficiently and economically supporting the frequent load changes of vehicle traction. Many of them had a troublesome start up time and problems of life and reliability as well. Thus building ever larger fuel cells was pursued from about 1991 to 2001 but it ended in tears.
After that, better batteries, notably NiMH then Li-ion were able to take over even more of the work of traction. It has been feasible to trial smaller fuel cells in the hope of achieving an affordable fuel cell range extender for hybrid vehicles that can perform the easier task of providing constant power and less of it. Both the improved power density and the improved energy density of the newer batteries come to the rescue. Commercial success is still elusive, unless we count one off Autonomous Underwater Vehicles UAVs, Unmanned Air Vehicles AUVs and military land vehicles that have been deployed for something more than a trial. All the same, there is reason to believe that commercial success of volume production of traction fuel cells for vehicles will be achieved in due course as they are perfected as range extenders, not primary power. In this new role, they will be providing only kilowatts to tens of kilowatts of power in the main, just like their rivals the simplified gas turbine and piston engine range extenders that are designed-to-purpose. The history of trials of fuel cells in buses is illustrated below. They peaked at around 300 kW but we show the broad trend of the largest and smallest ones.
Trend of size of the largest (in red) and smallest (in green) fuel cell sets used in 98 bus trials worldwide over the last twenty years. 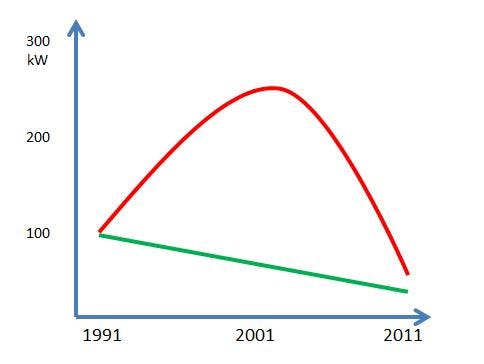 Source IDTechEx
Now let us look at the next twenty years. The hybrid vehicle is evolving to become more like a pure electric vehicle. The battery is doing more of the work and the conventional engine is doing less of the work, this increasingly involving no direct drive of the wheels but just the function of charging the battery when going along. Nevertheless, that does not mean that the hybrid will end up with the huge batteries holding hundreds of kWh that we see in the larger pure electric vehicles today. This will be resisted because batteries are still the Achilles heel of electric vehicles in limiting price reduction, performance and life. Although this will be eased by the planned threefold reduction in lithium-ion traction battery cost over the decade and probably greater reduction in price due to oversupply, that is not enough to prevent batteries being a limiting factor.
We shall therefore see fast charging to the vehicle - frequent top up becoming feasible - reducing the necessary size of battery even as all-electric range of a hybrid increases in response to strident demands from users. (They can save a great deal of money by using electricity whenever possible and be greener). An increasing variety of energy harvesting and use of supercapacitors in the vehicle will also reduce the size of traction battery that is needed, compared with what it would otherwise be. In other words, traction batteries in hybrid vehicles will get bigger but nothing like as big as those in today's pure electric vehicles that they increasingly emulate in having high energy density to get longer all-electric range. The days of hybrid vehicle batteries optimising primarily power density and cycle life are ending as this becomes a given and attention turns to all-electric range. Over the next decade, this all-electric range of hybrids will treble from today's 80 kilometers or so in the best on-road hybrid vehicles in volume production.
Evolution of lower power range extenders is matched to higher energy storage/ energy density batteries becoming affordable and energy harvesting increasingly being of assistance, though not on demand like a range extender. We have mentioned this earlier but here we look in more detail, one scenario for large vehicles being shown below.
Evolution of traction batteries and range extenders for large hybrid electric vehicles as they achieve longer all-electric range over the next decade. 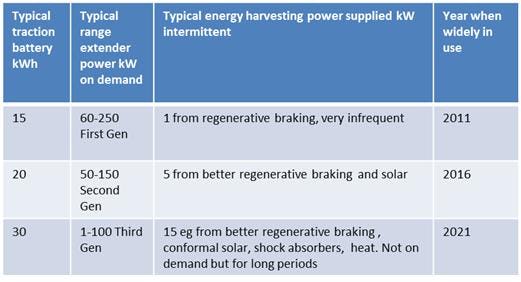 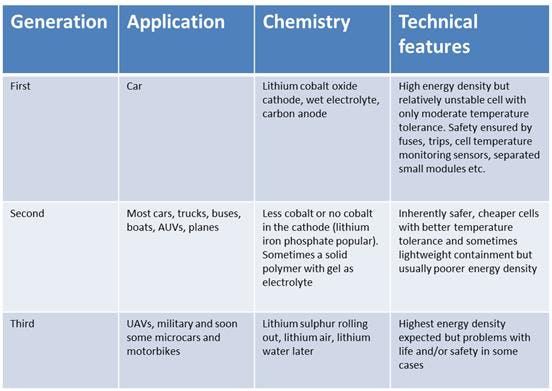 Source IDTechEx report, "Range Extenders for Electric Vehicles 2011-2021"
Most hybrids today use an off-the-shelf diesel or gasoline engine not designed for this purpose but with some modest modification to improve performance and cost in this application. Thanks to those better batteries, range extenders now work at fairly constant torque and revolutions when they revolve, as with a piston or turbine motor, or fairly constant power output if they generate electricity directly as is the case with a fuel cell range extender. With current and imminent technology, the traction battery in the vehicle that powers the electric traction motor copes well with power surges and instant start up requirements, so even the notorious warm up time of some fuel cells can increasingly be tolerated. An off-the-shelf conventional internal combustion engine designed for nearly instant warm up, huge surges of power and so on is therefore over designed for today's range extender purposes and this comes with being over- expensive, over-polluting and over noisy and vibrating. Users really notice these things being eliminated. For example, 15% more passengers use the new electric buses in Amsterdam, citing the gentler, quieter ride.
In short, fuel cells and lithium-ion traction batteries will increasingly be seen working together in driving land, sea and air vehicles. Their relationship is changing but they have much in common. For example, third generation lithium-ion batteries are often solid state, employ printing technology and allied nanotechnology, capabilities also brought to bear in the newer fuel cells. For more on printed electronics and electrics attend the world's largest event on the subject Printed Electronics USA 2011.
Also attend Electric Vehicles Land Sea Air USA 2012.
And read Range Extenders for Electric Vehicles and Electric Vehicle Traction Batteries 2011-2021 .

IDTechEx Insights: Technology Trends 2023 Magazine
Are Cobots Safe to Work Side by Side with Humans?
Will Tesla's Humanoid Robot "Optimus" Really Be Able to Serve People?
Industry 5.0: Hype or Unprecedented Chance for Collaborative Robots?