This article shares some of the research carried out for the latest in the series of 18 IDTechEx reports on electric vehicles and their components. The report is "Electric Vehicle Industry Profitability 2012 - Where, Why, What Next" www.IDTechEx.com/EVprofit}.
On IDTechEx analysis, the electric vehicle (EV) business is rising strongly to achieve about $264 billion in sales at ex-factory prices in 2022. Obviously, that will permit many enduringly-profitable ten billion dollar plus businesses to be created, so the race is on. Sadly, in an eerie repetition of what happened 100 years ago, the thousands of manufacturers in the EV industry today (then it was hundreds) are mostly wrongly positioned and headed for oblivion. 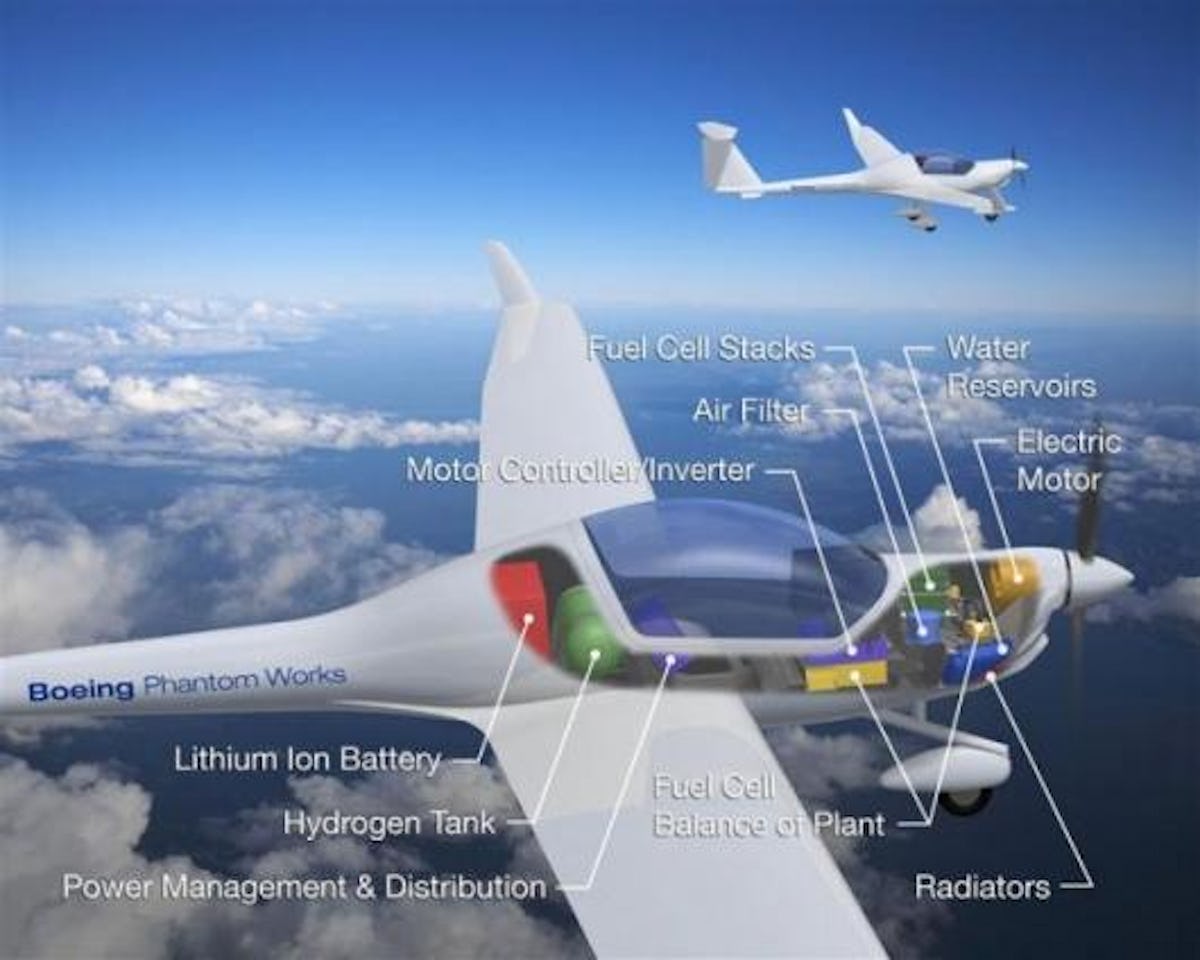 Boeing fuel cell aircraft trial
The business is even more difficult to read this time because this is an industry in ferment. Many vehicle makers are broadening into allied markets taking them into land, water and airborne electric vehicles, on-road and off-road, on-water and underwater. The biggest players increasingly make their own batteries, motors, electronics, electrics and so on, leaving component suppliers to compete with their customers.
Those filing the largest numbers of patents and most formidable patents are not those popularly portrayed as leaders. (For more information read the "Advanced Energy Storage Technologies: Patent Trends and Company Positioning report";www.IDTechEx.com/patent.
There is a prospect of many key components being replaced with something completely different such as supercabatteries, structural electric components and multiple energy harvesting, fundamentally changing the competitive landscape. As a consequence, those making the shrewdest acquisitions are often new entrants who come at it with an open mind, such as BASF recently buying Sion Power.
To make sense of all this, we recommend looking at actual financial results, success and failure and applying various "Rules of the marketplace" such as V curves of profit and the Boston Matrix that have served well in the past to predict what has subsequently occurred in this industry.
A dose of common sense helps too. For example, IDTechEx has long pointed out that making on-road EVs that are dangerous to pedestrians on the sidewalk and dangerous to the occupants when on the road can never lead to volume sales. Even niche marketing of such things is troublesome and yet new ones are still announced with monotonous regularity.
On the other hand, there are enduring barriers to entry in such niches as Autonomous Underwater Vehicles (AUVs), entirely pure and hybrid electric, where Kongsberg of Norway is winning and some cost $5 million each. Consider hand- launched electric surveillance Unmanned Aerial Vehicles (UAVs) - entirely pure EVs for silence - where AeroVironment is profitably well out in front. Orders for both can run to tens of millions of dollars even when numbers are only for a few to a few thousand. In the electric aircraft sector Northrop Grumman's recent $517 million order for one electric airship should be highly profitable.
Everywhere one turns in this industry it is important to ignore superficial analysis. For example, Toyota is not reeling from the Tsunami and quality recalls. It has widened the gap between itself as leader in electric vehicles and number two and our analysis of its EV trading figures, patents and technological roadmap shows it is going to be extremely difficult to beat in the next decade. It is known as leader, by a big margin, in hybrid cars. It correctly predicted that we are in the decade of the hybrid and it has been first to move rapidly to offer plug-in hybrids (what is really wanted) and a hybrid version of all models. But look closer and you see it is also world number one in pure electric material handling vehicles such as forklifts - sharing those technologies with its other EV divisions. Toyota does well in electric buses as well. To find out more about electric cars read "Hybrid and Pure Electric Cars 2012-2022"; www.IDTechEx.com/hybrid.
Which of Toyota's competitors sees the big picture and will one of them catch up by buying billion dollar EV players such as KION Industries? Yes, many of the leaders in EVs are never mentioned in EV conferences and media. IDTechEx gives the figures and compares them with those of other contestants.
The IDTechEx event "Electric Vehicles Land Sea and Air" in San Jose California March 27-28 www.IDTechEx.com/EVUSA is also something of an antidote to the blinkered approach of many investors and others in the industry.
It pays to understand the significance of giants such as Caterpillar in earthmoving, John Deere in agriculture and Beneteau, world leader in seagoing leisure boats, offering hybrid electric versions for the first time last year. Savvy EV component suppliers benefit from these potentially large niches by getting close to such special requirements while exploiting standardisation and modularity.
Another play is putting together many manufacturers in hopelessly fragmented EV sectors such as light industrial and leisure hybrid and pure EVs. Polaris Industries is one of the few that has spotted this opportunity and acted accordingly. It is to be admired if it really goes to the logical conclusion and puts its many acquisitions onto common platforms utilising common components.
Toyota is one of the most formidable developers of next generation EV batteries, where there are now huge warning bells for independent suppliers with insufficient funding and intellectual property. These little ones will be bought or binned. Now, they even face gorillas like Bosch, Samsung, BASF and IBM storming the traction battery party, not just the ten or so other giants