Manufacturers of vehicle batteries were in a slow moving industry based on lead-acid batteries. However, they are now in an era of very rapid change. Product re-positioning and new technology can make the difference between high sustainable profits and oblivion.

Lithium-ion is the winner

Primarily, the market revolves around lithium-based rechargeable batteries although largely commoditised lead-acid batteries will be around for some time in such vehicles as forklifts, vehicles for the disabled and, in China at least, e-bicycles. Lead acid even has a fragile position in a new market for cars that switch off their engine when they stop for any reason. These mis-named "micro-hybrids" - they are not electric vehicles - tend to find the favoured larger lead-acid batteries to be inadequate for frequent stop-start or stop-start on cold days. French automotive manufacturers have therefore fitted lithium-ion batteries to these conventional vehicles for these purposes. Lithium-ion batteries are even fitted to almost all e-bikes outside China, and some in China nowadays, and also to some vehicles for the disabled and forklifts. They are the norm for latest plug-in hybrids because the nickel metal hybrids cannot provide adequate all electric range and they have high self- leakage and exposure to rare earth prices. Lithium-ion is the norm for pure electric Unmanned Aerial Vehicles (UAVs), Autonomous Underwater Vehicles (AUVs) and most on-road pure electric motorcycles, scooters, cars, buses and trucks. They are penetrating the traditionally lead-acid business of Ground Support Equipment (GSE) in airports, such as aircraft service vehicles on the apron.

All serious analysts predict that lithium-ion will be responsible for the majority of expenditure on rechargeable batteries over the coming decade, notably in the lithium-ion form. It is therefore important for those making, designing in and using such batteries to understand the variations emerging and their potential for success or failure. Indeed the chemistry of cathode, anode and electrolyte is changing and highly profitable niche markets are emerging while several manufacturers go under every year usually because they go for volume business without the intellectual property, past investment or future financial resources of the leaders. 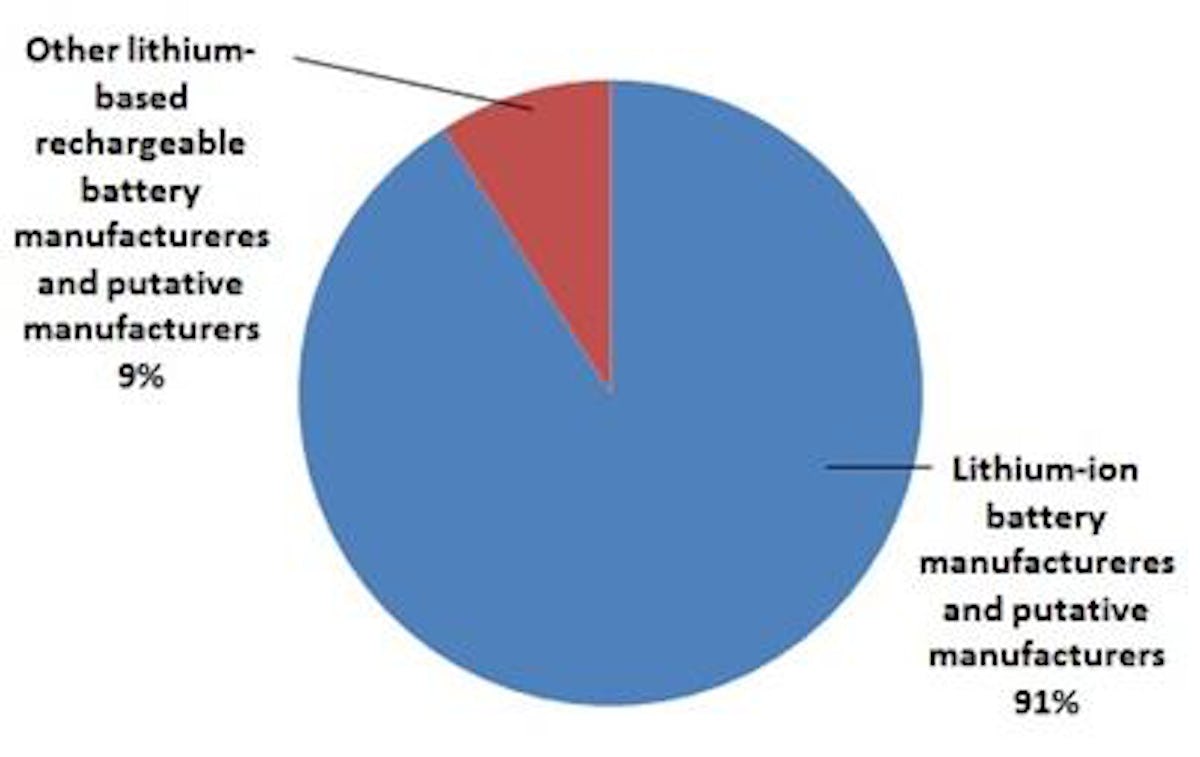 In other words everything is up for grabs in lithium-based rechargeable batteries from the chemistry and operating principle to where they can be profitably sold. For example, the world's largest industrial battery manufacturer EnerSys has got there by superb performance in a large number of niches and its approach to lithium-ion batteries is to tackle industrial, aerospace and other niches through a joint venture and a recent small acquisition, shunning the bloodbath in volume markets where three giants control the market. Yardney Technical Products makes lithium-ion batteries driving vehicles on Mars and one military version is 1.2 MWh, equivalent to 800 pure electric cars! That way lie barriers to entry and excellent profits for those with the technology and route to market. For more examples, see the IDTechEx report, Marine Electric Vehicles 2012-2022 and Electric Aircraft 2012-2022.
The chemistry of lithium-based rechargeable batteries is now complex as well as rapidly changing. Notably, advances will provide longer all-electric range in hybrids and pure electric vehicles (by land, sea and air), give them have longer life, lower cost and improved safety. Some of the options are shown below: 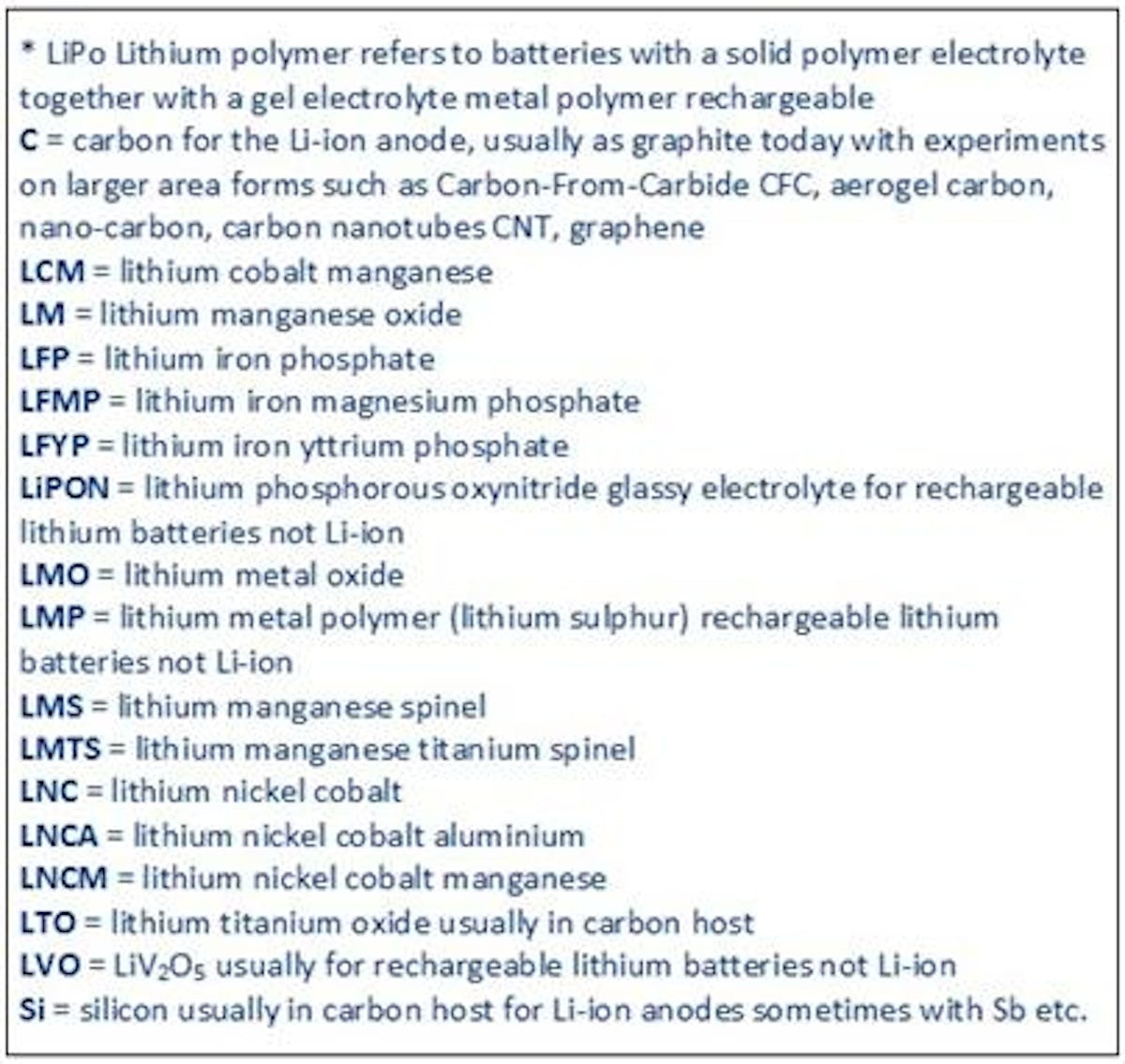 IDTechEx analyses the trends in these materials and those that seek the trends as part of the overall situation with chemistry of new electronics and electrics can find it in the new IDTechEx report, Most Needed Chemicals for New Disruptive Electronics and Electrics: De-risk your investment, research requested by several of the world's largest chemical companies.
Even the battery case and construction geometry are changing with fastest growth for the more difficult pouch and prismatic construction (in a rectangular box). It can involve sheets or a winding. The total number of manufacturers and intending manufacturers of Li-ion batteries is around 150 rising to about 200 in a few years, particularly as more Chinese companies enter the business. Usually, they make the easiest types - low-cost small ones with short life and poor performance in electronics, meeting the easiest specifications such as room temperature operation.
The Chinese, Japanese and Koreans are well placed to succeed in consumer applications but there will be a shakeout as mobile phone sales, for example, become constrained by the size of the population of the world and become commoditised. The Chinese will play the low-cost game in the main. The Japanese and Koreans will seek new form factors, higher energy density and other performance advantages, maybe even having integral energy harvesting and stretchable consumer versions of lithium-ion batteries.
For more information on any of IDTechEx's reports please contact our team on reports@IDTechEx.com.