Peter Stonham, Editorial Director of New Transit introduced the excellent 25 person London event then Dr Peter Harrop of IDTechEx scoped the total subject of electric vehicles, land, water and air - one industry now with best practice first occurring all over the place and rapid improvement with almost all components changing radically. He showed several cases of supercapacitors replacing lithium-ion traction batteries in vehicles but he observed that there is considerable disagreement between urban bus manufacturers as to whether hybrid or pure and supercapacitors or Li-ion batteries are best, compounded by the different rates of improvement of the various options. He said this is good because improved performance is highly likely to be achieved since there are many routes to it.
Failure to benchmark
He noted that the Boeing Dreamliners are grounded due to burning lithium-ion batteries and said that their system design appears to have ignored best practice as evidenced in electric buses, trains etc - the perils of not benchmarking across the whole EV industry. The event then mixed rail and bus presentations to reveal common factors and lessons learned.
Trial of wireless charging of buses

James Talbot, Project Manager, MBK Arup Sustainable Projects spoke about this joint venture which is preparing a bus trial of wireless opportunity charging at 120kW in Milton Keynes UK. Certainly it is a myth that inductive charging can only be low power. It builds on the Linea Star Route in Turin that has worked well for eight years. 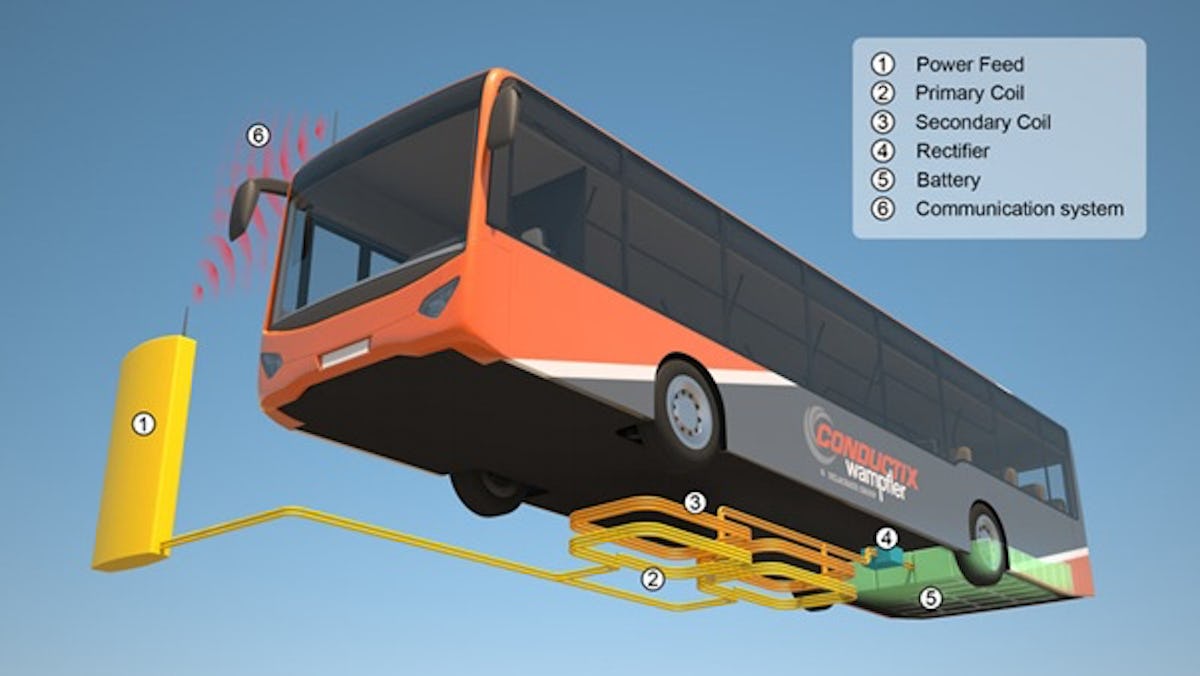 The trial will use a small Wrightbus Streetlite bus because of all the mini roundabouts and three Conductix Wampfler inductive charging points with rising coils for better efficiency are being introduced. Something similar is going ahead in the Netherlands using two 60kW chargers co-ordinated at each charge point. In addition, there are overnight wired chargers. The 6am to 11 pm duty cycle is exacting with 56,000 miles travelled annually per vehicle. They believe that it is the first time in the world that an inductively, opportunity- charged, pure-electric bus system is completely replacing a diesel system. He said that they are still using Qualcomm Halo for passenger cars and are not hooked on Conductix Wampfler.
Rail progress and lack of it
Matthew Ledbury, Senior Advisor Community of European Railway & Infrastructure Companies CER and member of ERRAC gave a wide-ranging talk on regulations, environmental and other aspects of railway electrification. The Euros 80bn Horizon 2020 program is of great significance to rail. However, in answer to a hostile question, he could give no assurance that the European rail system will progress very quickly to single voltage let alone single rail, the cost being more an issue than the speed of decision making in the European Community. He was very negative about fuel cells in rail due to cost and he favoured energy storage.
Bombardier got there first?
Neil Walker, Senior Director, Leader Business Development, Bombardier addressed, "Inductive Wireless Charging "On The Go" for Buses- Unlocking a New Approach to Passenger Road Vehicle Electric Energy".

Very persuasively he argued that wireless coming into laptops, phones and all our lives; it must be the way to go with buses and the like. Indeed their Primove inductive charging is their own technology going back many years and usually only needed at depots with 200kW available. 750V DC and 400V AC power can connect to this. You can even clean the bus while it is charging. Choice of lithium-ion bus battery is critical to accept such fast charging. They once had supercapacitors to help with this but now they do not need them. The expensive battery lasts the 8-10 years of life of a 60kW charged bus so it is fit and forget, in that respect as good as a supercapacitor. Life is longer for lower power charging. It is available on all their bus sizes and they are trialling an on-the-go charging system in Sweden and the USA.
Pure electric buses win?
With the existing system, the area of most change is the charging power source which can be fuel cell, battery, grid etc. "We believe these buses are competitive with diesel and the public love electric buses - no vibration, clean, environmentally friendly......" He described an independent EC study that has shown that inductively charged pure electric buses, with several rollouts in Belgium and Germany, are more competitive for urban use than fuel cell, hybrid and diesel buses. IDTechEx Research notes that the Chinese favour pure electric for urban buses and dominate global bus demand. Neil noted that a recent electric bus conference in Germany had over 200 delegates; further evidence of acceptance of the fact that electric is the way to go.
Energy storage needed for rail, move to AC
David Clarke, Director Rail Enabling Innovation team (affiliated to the Rail Safety & Standards Board) described their attempt to identify ways of reducing costs and carbon emissions and improving service using new technology and identify and assist appropriate companies to make it happen. They have £80 million over the next few years (vs the £12 billion total turnover of the UK rail industry. Rail has not yet solved the "energy storage conundrum" so it uses on-peak electricity. He noted that rail electrification increases business and sometimes passenger capacity and reduces pollution, journey times and running costs. The trend in the UK is to move to AC catenary from DC live rail to increase efficiency thus reducing running cost, not least because the switchgear, some of which is 80 years old, is due for change anyway. For freight there is a particular need to go everywhere on the rail network so hybrids are good with flywheel versions of interest. That does not make inductive charging attractive because catenaries can be used for much of the duty cycle. Network Rail is interested because it can reduce infrastructure cost.
Hybrid buses and contacted charging win?
Adrian Wickens, Product Planning Manager, Volvo Bus closed with an appraisal of "Electro Mobility - Harnessing Technology and Supporting Its Adoption" particularly looking at buses in the UK where he had a different figure for bus life at 15 years. 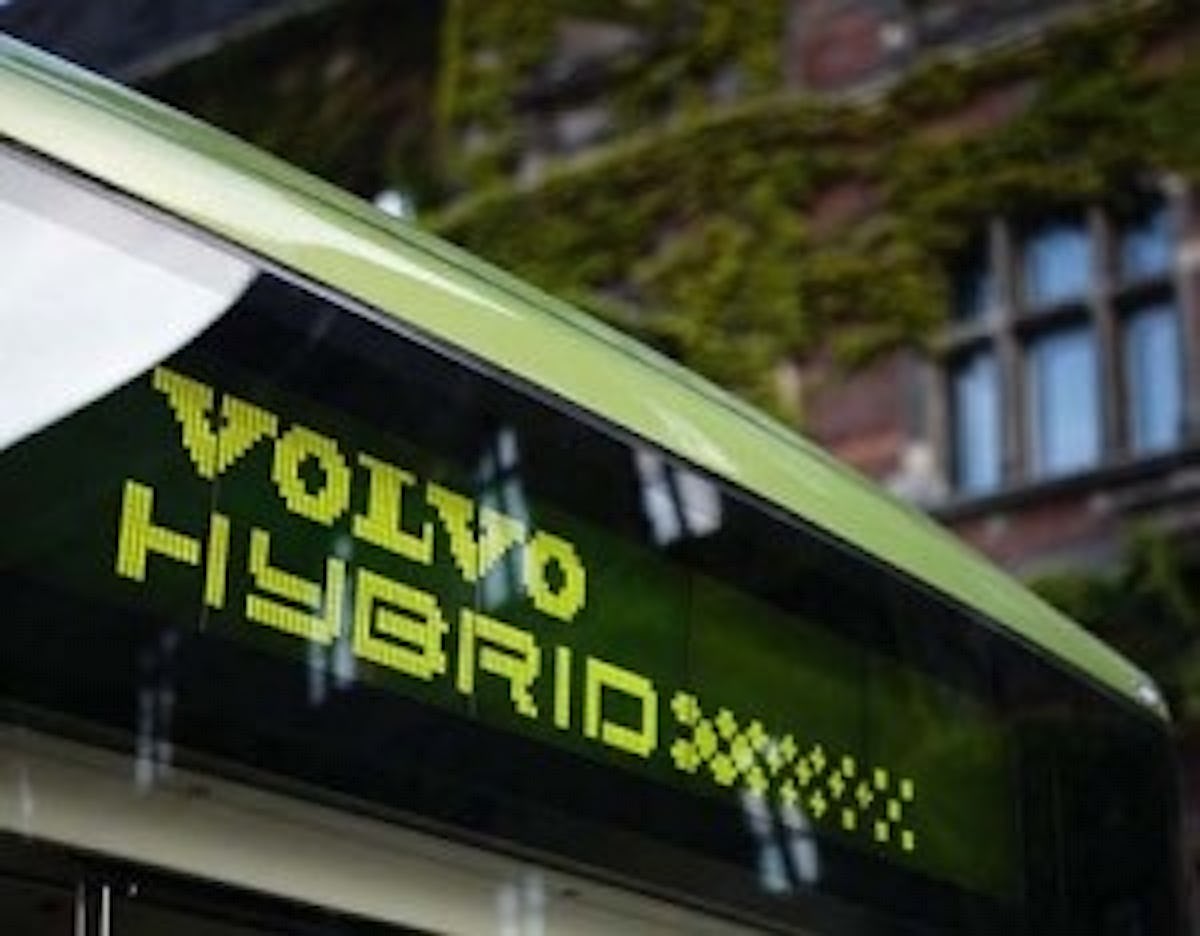 He advised that infrastructure is something bus operators are wary of because they restrict re-routing and so on. He supported "emphasis on wireless" and described the large sales of Volvo hybrid urban buses in the UK. Unlike Bombardier, Volvo Bus is clearly keen on hybrid powertrains in urban buses and plug-in charging rather than contactless though he conceded that the UK is keen on inductive. He believes that, for the immediate future, engines running on diesel will dominate including hybrids with pure electric coming in later. Some will operate purely electrically in sensitive areas. However, actual rollouts are mixed with Leeds even introducing trolleybuses.
View of a huge bus operator
The number of young people taking a driving test is down 25% since 2005 but there is no long term growth in bus ridership. "Applying Smart Energy Solutions in Bus and Rail" was the topic of Alex Hynes of the 23,000 person transportation operator Go-Ahead Group which has seen a steady increase in ridership in its operations across southern England. He described his regenerative braking using both the DC rail and the AC overhead catenaries. Hybrid buses are being rapidly introduced with a Williams Formula One flywheel version being trialled with excellent results. Two Chinese 155 mile range pure electric buses are being trialled. IDTechEx Research notes that this is the new benchmark for the range of affordable land, water and air pure-electric vehicles. He covered the challenging improvements in pollution reduction and cost reduction that Go-Ahead has established and continues to meet.
Hybrid buses flood into London
Liz Halstead, Policy Manager for Transport for London TfL, described how there will be 1600 hybrid buses in London's 8500 bus fleet in 2015 and already the fleet is the world's youngest with an average of 6 years' age. TfL seeks to encourage reduction of pollution and increased efficiency of transport in London including encouragement of cycling. 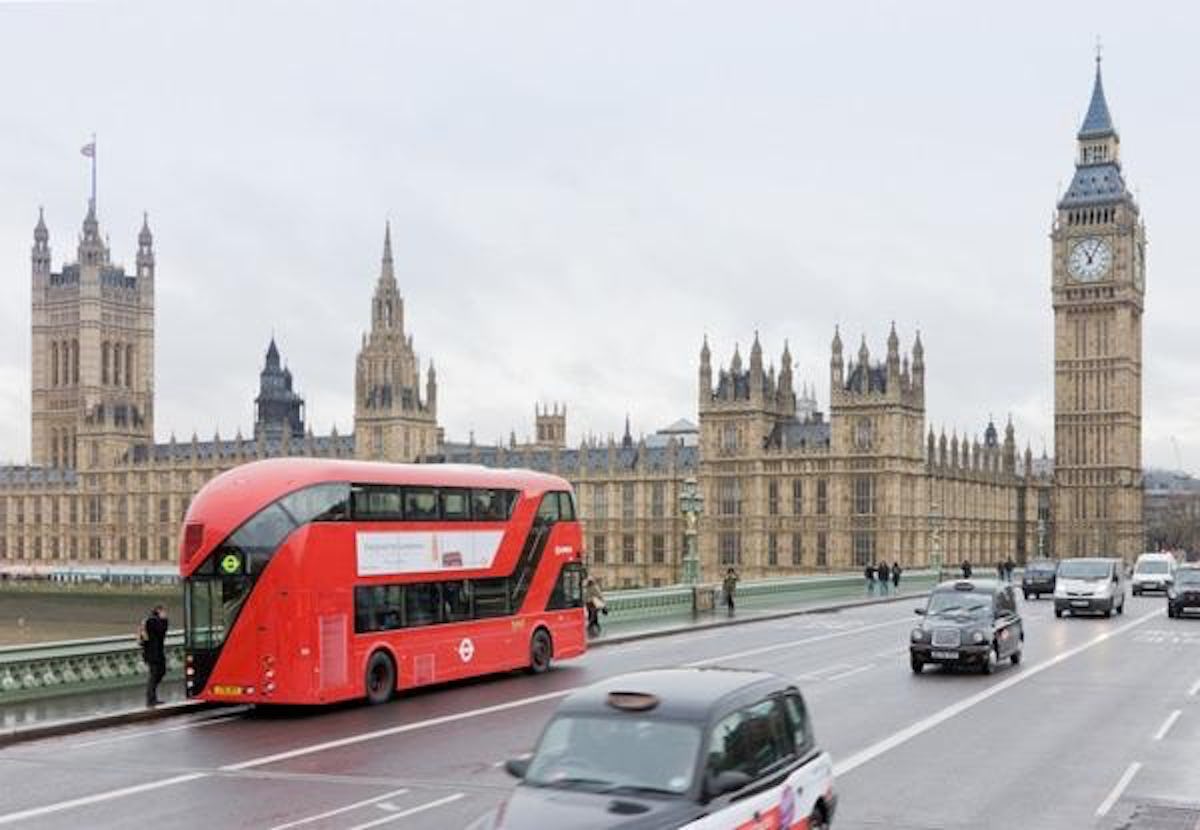 New niche for e-bus operation
Finally, Andy MacLauchlan, Founder and Chairman of Green Urban Transport GUTSI promoted a new niche in transport. The average round trip commute in London is 75 minutes, a huge unproductive time every year. He proposes rewarding the people with the shortest commute with what seems to be a pooling taxi service, single point to point, in a pure electric bus, with a guaranteed seat. For a public transport fare it has a guaranteed leaving time and takes less time than using your car to get to destination. It has executive jet décor, WiFi and newspapers but corporate sponsorship is essential for viability. It gives employers economic benefit, partly because staff are more productive and more secure on this bus but also helps to attract and retain staff and it is cheaper than taxis etc to provide. So far nine-seater buses are used. He argued that, because it is only on-demand, it has record pollution reduction and actually eases the inefficiency of the public transport system at peak times.
For more read:
Industrial and Commercial Hybrid and Electric Vehicles 2012-2022: Forecasts, Opportunities, Players
Traction Batteries for Electric Vehicles Land, Water & Air 2013-2023
Electrochemical Double Layer Capacitors: Supercapacitors 2013-2023.
Hybrid and Electric Buses and Taxis 2012-2022: Forecasts, Opportunities, Players.