IDTechEx has visited many supercapacitor manufacturers and interviewed several professors who have presented at IDTechEx events on the subject. This article highlights some of our findings from those interviews.

Replacement of lithium-ion traction batteries with supercapacitors in hybrid electric vehicles is now commonplace but the opposite is not. The National Renewable Energy Laboratory has successfully replaced the NiMH battery in a hybrid car with a supercapacitor storing less energy and Toyota has a traction supercapacitor in the Yaris Hybrid-R concept car. Indeed, a Japanese supercapacitor distributor claiming to be close to what is going on told us he confidently expects the Toyota Prius batteries to be replaced with supercapacitors, at some stage.
The safety, life and performance advantages of supercapacitors see them increasingly replacing or partly replacing rechargeable traction batteries in vehicles without coming anywhere near to the energy stored in the batteries replaced. That happened long ago with Automatic Guided Vehicles (AGVs) which are also recharged frequently, thus needing minimal energy storage and therefore energy density, cost per unit of energy stored not being the primary consideration. Nonetheless, this is not a unanimous view for all types of hybrid vehicle. Certainly, designers of hybrid vehicles must now consider the supercapacitor option.

It is not just Envia, now discredited, that has claimed to double the energy density of lithium-ion batteries in the laboratory. Prof Elena Shembel from Ukrainian State Chemical Technology University in Dnepropetrovsk, Ukraine and President Enerise USA said that Enerise has achieved 260 Wh/kg using Mn spinel cathode, non flammable solid electrolyte (combining lithium oxide with other inorganic oxides). Supercap maker JSR Micro said that their lithium-ion capacitors have proved too expensive to put across traction batteries and Chrysler finds that the use of supercapacitors in traction is unattractive, price being an issue.
Cap-XX reminded us that many electronics applications also have low average power, but need bursts of high power - ideal for supercapacitors. EV-related examples include:
For these applications, batteries have limitations because the charge/discharge cycle life is limited & failure is unpredictable, maintenance, replacement & disposal is expensive,operating temperature range is limited (especially low temp) and high power + high energy/long life are incompatible goals.

Energy harvesting integrated circuits designed to charge supercapacitors have just been released. Where a supercapacitor replaces the battery in energy harvesting, it buffers the load from source and vice versa, converting low and fluctuating power to stable voltage and peak power to the load. The requirements here are that the average load power should be less than the average source power. The supercapacitor is at its best where the average power is much less than peak power. The source sees constant power load set at maximum power point and the load sees low impedance power supply for the required duration. They must behave gracefully into a short circuit, start charge from zero volts, provide over-voltage protection, prevent the supercapacitor discharging into the source and optimise efficiency.

The Cellergy stand had an excellent demonstration of how their small laminar supercapacitors with aqueous electrolyte are replacing tantalum electrolytic capacitors or fairly large batteries (for electronics). This is because of cost and performance benefits. However, although low ESR is part of the requirement here, they are not currently contemplating developing larger versions for replacing AC electrolytic power capacitors.
Fig 1. Cellergy supercapacitor in wireless sensor network node 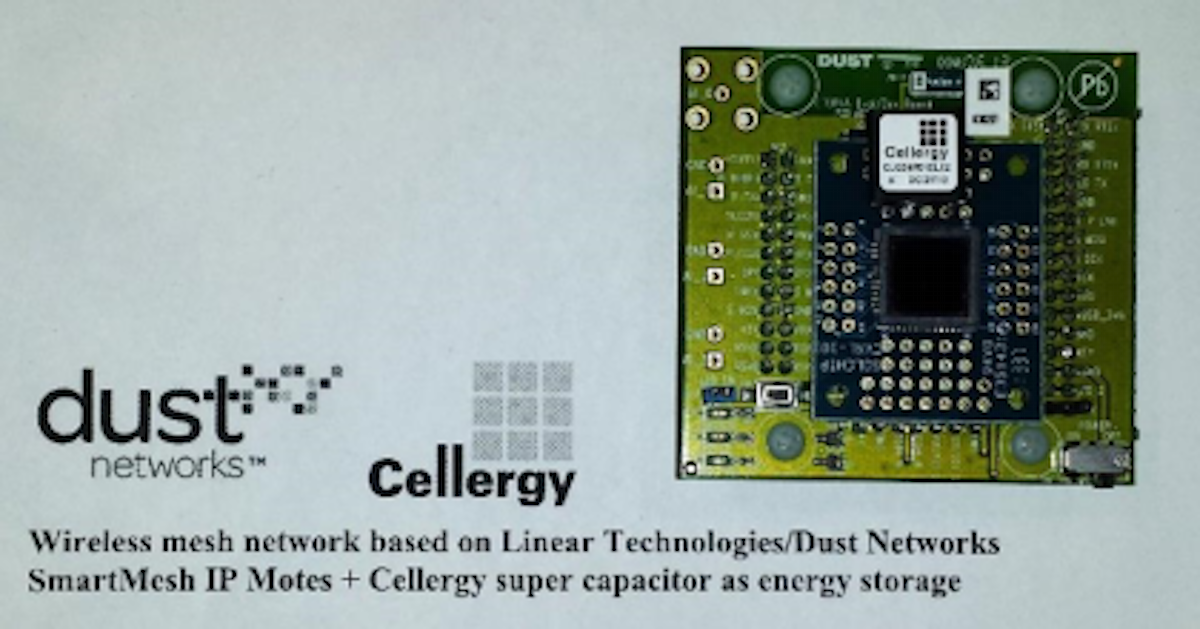 Maxwell Technologies and separately Nippon Chemi-Con have recently offered one pack to replace both the stop-start and the regular lead acid battery in a car, the NCC one now being in a production car they tell us. Indeed, Olife will show something similar at the german Motor Show this year with a Maxwell supercap across a lithium-ion battery from A123 a subsidiary of Wianxiang of China. The pack contains supercapacitors and a small battery and lower cost as well as better performance are claimed. These combos are taken seriously in the industry whereas the lithium-ion battery for stop start on its own is a loser because the size needed is too expensive. Some suppliers claim that a smaller battery with a supercap is actually cheaper than lead acid versions.
Top image of Toyota Yaris: Toyota
For more attend the forthcoming events:
Business and Technology Insight Forums, 3-4 September 2014, Tokyo, Japan
Supercapacitors USA 2014, 19-20 November 2014, Santa Clara, CA, USA