Extreme vehicle concepts have a habit of appearing in a car near you. An example is Formula One racing giving us carbon and other composite bodywork now seen in the popular BMW i3 pure electric car. Energy independent electric vehicles (EIVs) perform their tasks without refuelling or plugging in. These do not even use the new contactless charging. They have equipment on board that turns ambient energy such as sun, wind and waves into sufficient electricity for traction, often with some left over for hotel facilities needed by humans on-board. Then there are the needs for electricity for external lights and power for the rapidly increasing amount and complexity of electronics used in telematics, sensing systems, better, safer battery management systems and so on. The connected vehicle and the autonomous vehicle also need extra power for electronics yet sometimes this can still be sourced from energy harvesting. The burgeoning power electronics is covered in the IDTechEx report, Power Electronics for Electric Vehicles 2015-2025.

Providing all that electricity seems extreme enough but the solar racers have already led to the street legal Sunswift eVe in Australia. Solar planes have resulted in ones circumnavigating the world. Planes and airships staying aloft for five to ten years are imminent.

Uniquely, analyst IDTechEx is tracking this rapid progress in its new overview report, {Energy Independent Vehicles 2016-2026 and the drill down into the remarkable technologies that will be cascading into general use, Energy Independent Electric Vehicle Technology Roadmap 2016-2036. For example, regenerative energy harvesting within the vehicles hugely increases efficiency and there is much further to go with this beyond the regenerative braking seen today. We shall have regenerative active suspension and more soon.

The minimalist approach is already spawning a sub sector of EIVs that IDTechEx calls lizard electric vehicles because they wake up with the availability of the ambient energy such as the sun coming up. This is a more powerful idea that it first seems to be because the abandonment of energy storage saves weight and space, meaning the vehicle can be smaller and therefore go further and for more of the day. Most are autonomous, saving on power for hotel facilities and space and equipment weight for people.

Use of the next generations of photovoltaics, regenerative harvesting inside the vehicle, extreme lightweighting and unprecedentedly efficient power trains. Some solar racers that have motors with 97% efficiency.
IDTechEx Chairman Dr Peter Harrop enthuses, "There is a fabulous roadmap of new technology to be added and much of it applied to lizard electric vehicles. A Fresnel lens film on ultra-thin single-crystal silicon will take efficiency to 44% using Sumitomo Electric technology.
Carboline of Kharkiv in the Ukraine has ultra-lightweight carbon fiber honeycomb with a multiple V shaped surface structure covered in aluminium foil that directs the sun, even at low angles, to the amorphous silicon photovoltaics in the lower layer. It is built from a unique non-woven bi-axial textile already in use in multiaxial preforms in unmanned aerial systems. Engineer and owner of Carboline, Volodymyr Gavrylko proudly pointed out to IDTechEx that the whole structural member made in this way, such as the wing of a plane, is only 850 grams per square meter". 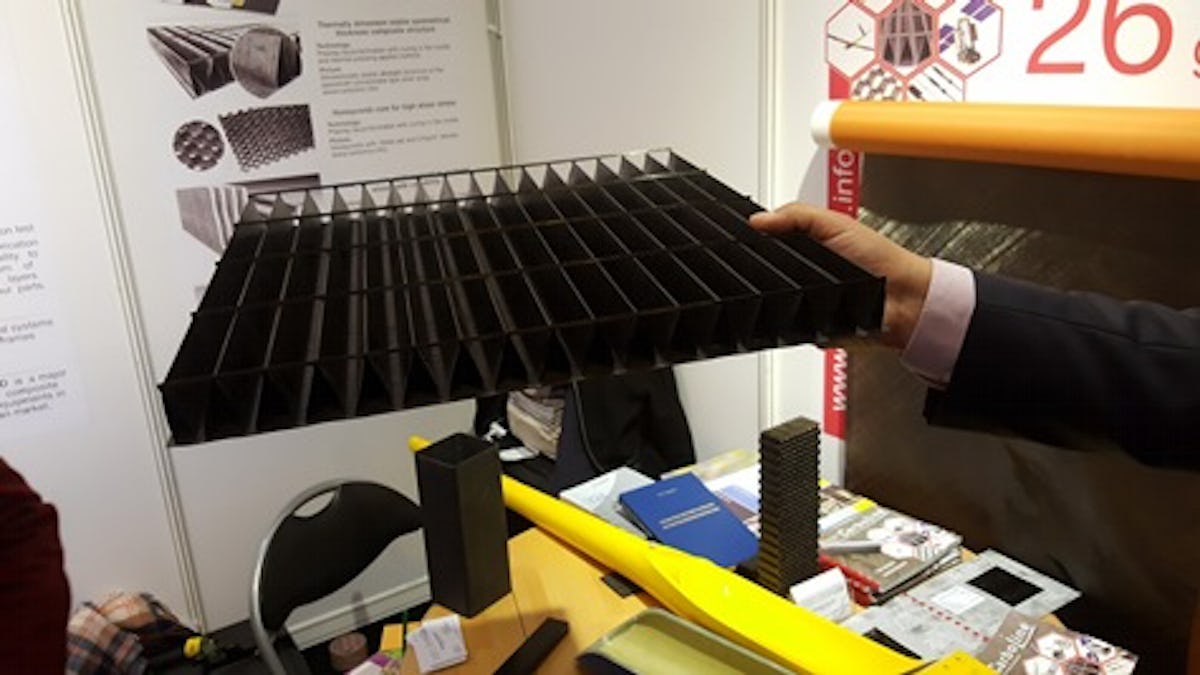 Fig 1. Carboline honeycomb of ultra-lightweight carbon fiber construction without the planned integral photovoltaics taking sun reflected from wide angles by foil on the sloped surfaces. Source: IDTechEx photograph at their exhibition stand at Advanced Engineering UK, November 2015.
If current research programs are successful, we shall even see structural supercapacitors in lizard electric vehicles that enable them to work for even longer hours thanks to energy storage that adds virtually no weight because it replaces a structural component - the load-bearing bodywork. See the IDTechEx report, Structural Electronics 2015-2025: Applications, Technologies, Forecasts
Peter Harrop points to the NFH-H microbus from China that you can buy today. It uses "United Nations Global Blue Sky Award Winning NanoWin CIGS thin film solar modules". This thin copper indium gallium diselenide panels roof is tolerant of low light and light at narrow angles. During daytime, the five 96W panels give driving speed of 5-12 km/h without needing batteries, says the company. Abandoning lead acid batteries typically used in such microbuses probably means they work over an eight or ten hour day in most parts of the world. Pitched as an open tourist bus, it may well not be needed at night time and the extra cost of sophisticated photovoltaics is offset by building a smaller vehicle with less material and buy saving on battery cost, though the NFH-H microbus is not yet designed to purpose.

Suddenly satellite technology is becoming viable on Earth such as solar racers from Cambridge University in the UK with GaAs panels that are moved to automatically track the sun. Even expect multi-junction GaAs- Ge multi-junctions used to capture a wider range of frequencies on some vehicles.

Another use for a vehicle waking with the sun is the agricultural robot vehicle doing measurements across vineyards, those cleaning windows and those BP tells IDTechEx will be needed for inspecting oil refineries by climbing all over them. The autonomous Vinerobot in Europe is a multi-nation program and similar to one at Queensland University of Technology in Australia. They will be energy independent vehicles (EIVs). Maybe they will dispense with batteries - greener, saving money, increasing reliability, waking up with the sun to gently perform their measurements. Another candidate for the lizard mode of operation is marine robots such as Seaswarm oil slick gatherers that swarm at sea to perform their tasks autonomously. Batteries are often 50% of the cost of a pure electric vehicle so avoiding them could mean you can afford twice the number of vehicles, in this case gathering a much oil in the day as a battery vehicle could do day and night - probably more given the improvement in reliability. Indeed, such craft should use hinging in waves to garner electricity from them even at night time thus dispensing with batteries and working day and night like some autonomous underwater vehicles that surface to re-power when necessary.

With supercapacitor bodywork pioneered at that university and elsewhere and maybe extending wind turbines or kite energy units when not in use even more will be possible without the weight, pollution, reliability and life problems of batteries. An exciting future lies ahead and yes, much of this will appear in a boat, plane and bus near you whether or not it transmogrifies into a lizard.
Top image of Sunswift eVe: Wikipedia