This article shares some of the market research carried out for the brand new IDTechEx report, Future Powertrains 2016-2036 Put at its simplest, the main powertrain options for land vehicles over the next twenty years are as follows:
However, there is more to it than this, with new variants becoming practicable. We now repeat these basics giving more detail.

New focus for improvement and choice

In the coming decades the improvement and choice of land vehicle powertrain will mainly be dictated by emissions conformance at best cost/ performance compromise not independently performance, cost and fuel economy as in the past. By cost we embrace upfront cost, cost of ownership and resale price issues. This will result in popularity moving from conventional to pure electric as laws tighten and technology improves.
Pure electric is already the norm for most small land e-vehicles such as electric bicycles, mobility for the disabled, scooters, e-tuktuks, e-rickshaws and other micro EVs, such as "quadricycle" homologation in Europe. Other examples are indoor forklifts and electric airport Ground Support Equipment GSE. Some are already large markets not to be confused with cars homologated as such. For example, Terra Motors of Japan makes the three wheeled micro EVs and when we interviewed them in Japan they told us that Bangladesh alone is importing 500,000 yearly from China and, in India, the ICE three wheeler replacement potential is over five million. The Philippines, with 3.2 million taxi tuk-tuks to replace due to extreme pollution has just announced that it will put one million EVs on its roads very soon. Over 70% of golf cars are already pure electric, the rest being internal combustion not hybrid. Continuing this progress, many microcars are jumping directly from ICE to pure electric.

Compared to previous understanding of the subject, significant "new" powertrain arrivals identified in our latest research are 48V Mild Hybrids (MH) (set to replace much conventional ICE and non-plug-in strong hybrid) and energy independent vehicles (EIV), the new end game. The Immortus car currently fundraising for manufacture in Australia is an example of an EIV as is the NFH-H tourist microbus already on sale in China. Both rely on unusually efficient, large areas of photovoltaics for power and nothing else. Indeed, the tourist bus is available without battery in ultra-light lizard mode, waking with the daylight. Yes, the end game is even more radical than we thought and we can glimpse it now.
EIVs may be headed to a multibillion dollar business in 10-15 years, mimicking the EIV airships and planes that stay aloft for 5-10 years, already the subject of billions of dollars investment by NASA, Facebook, Google etc. today. EIV powertrain impact will be huge from enabling the Third World and remote communities to defense. EIV land vehicles could be a $250 billion business in 20-30 years. They will be significant long before that in (a) spawning new technologies useful in many types of vehicle (rather like Formula One today). Indeed, the world record breaking Nuon Solar Team from the Netherlands, with their solar racers crossing Australia fastest, has already spawned five startups and other solar racers have set records for photovoltaics and motor efficiency on land vehicles. Meanwhile, we are moving from range anxiety to range excess with PEVs as we await "unlimited" range of EIVs. Will the Nanoflowcell pure electric hypercar really have over 1000 miles range as claimed this year? If not, one certainly will one day.

At the other extreme of making existing ICE powertrains have three electric modes - silent take-off, creeping in traffic and maintained-speed "active" coasting - we have the 48V mild hybrid. It is the lowest cost route to an electric vehicle at the larger C and D sizes of car and larger vehicles such as vans, trucks and buses. Following first series production in 2017, and even then not yet in EV form, it is possible that 48V mild hybrids will peak at over $250 billion in yearly sales before pure electric takes over because currently they look to be the only low cost way that manufacturers can meet the tough 2030 emissions legislation with minimal hassle, not because they are a "poor man's EV" though that will help to sell them as will the fuel economy.

Certain enabling technologies are common to most or all of the powertrain configurations we identify as commercially important over the coming twenty years beyond the ubiquitous internal combustion engine usually with stop-start. These include new reversing electric machines, power electronics and lithium-ion batteries. However, it is misleading to say, as some have done in 2016, that this removes risk from powertrain choice. For example, a downsized, down-speeded ICE for a 48V MH is managing huge load variations as primary traction whereas one used as a range extender, simply charging a battery when needed, may be at almost constant, gentle torque and revolutions - a completely different, far simpler design. The same is true of a reversing electric machine (the modern equivalent of a traction motor, alternator and starter) for a 48V mild hybrid vs one for a pure electric vehicle with much tougher traction requirements and no starter function. The one in a pure electric vehicle will increasingly get much of its charge from multiple energy harvesting and regeneration not the motor going backwards as with regenerative braking. Nevertheless, a trend to more than one reversing electric machine per vehicle is seen from 48VMH right through strong hybrids to pure electric powertrains.

Facilitating the above-mentioned priorities in design of the land vehicles of the future are certain approaches to powertrains such as lightweighting, size reduction, cost reduction, improvement in reliability, safety, life and so on.
We show how much of this will be tackled disruptively, for example by structural electronics and new components such as GaAs photovoltaics or GaN power semiconductors sometimes removing the need for water cooling. The Li-ion battery will be completely reinvented with new anodes, cathodes and non-flammable electrolytes possibly removing the need for some safety sensors and electronics and possibly making them suitable for molding into load-bearing structures, saving weight, space and reducing the cooling requirement. Supercapacitors, being electrostatic and not moving at all are first candidates for this however. New systems will be added such as regenerative active suspension, high power charging, inductive charging interfaces and Vehicle to Grid V2G electronics on-board becoming part of the powertrain. One worry is that that long term testing becomes useless if the original component in any of these has been withdrawn or redesigned radically on the production line while testing is carried out.

Forecasting now becomes very difficult indeed because one is estimating such things as unpredicatable politicians and their subsidies and inventions yet to be made. Add to that deciding whether cars will be mainly rental, throttling market growth or not or mainly autonomous, making the powertrain a commodity in the view recently expressed by Porsche Engineering. However, someone has to try and IDTechEx forecasts EVs, hybrid and pure electric, in 46 categories and runs scenarios. Here is one.
Possible scenario of number of cars sold globally that are conventional ICE vs mild hybrid, with several pure electric modes in later years. We see an eventual collapse in sales of both as mainstream pure electric vehicles take over when they are the most attractive and affordable option in the view of most mainstream buyers. 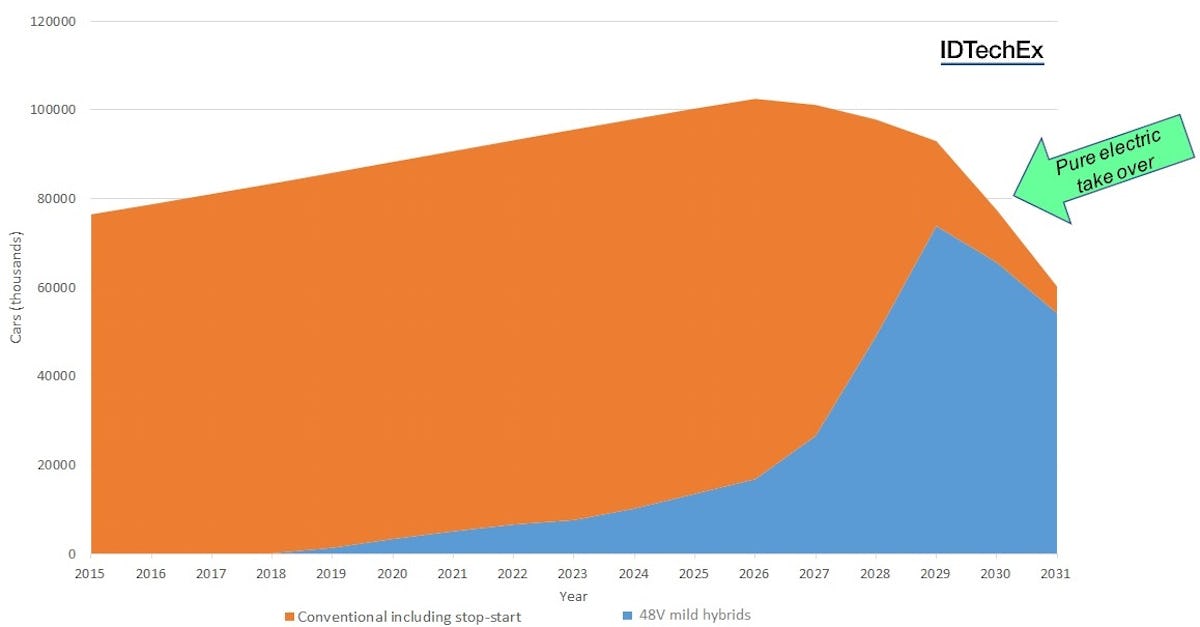 Source: IDTechEx Research report, "Future Powertrains 2016-2036" (www.IDTechEx.com/powertrains)
In addition to these forecasts a new and detailed roadmap is presented in the brand new IDTechEx Research report Future Powertrains 2016-2036, covering both technology and market development. IDTechEx tables and infographics pull together the analysis making it easy to absorb. No one else has this level of detail. Uniquely, IDTechEx presents a bigger picture of opportunity than that addressed by other observers and participants. The future is very different from that commonly portrayed and much more exciting.
Top image of Immortus car: EVX Pty Ltd