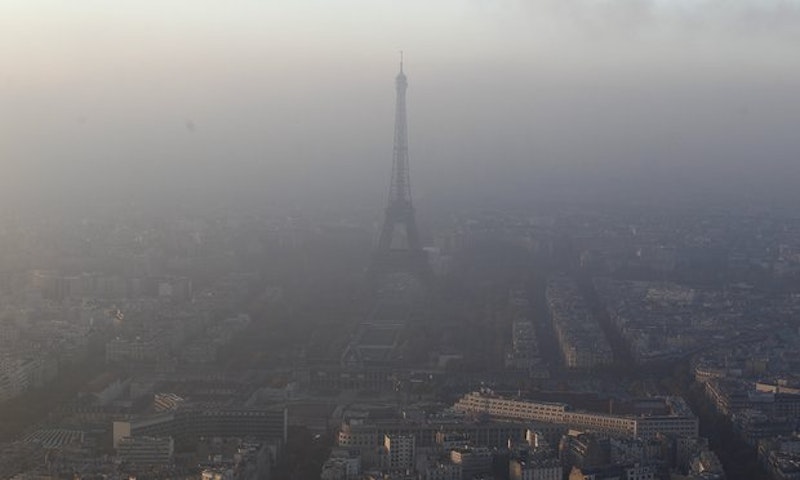 Last week Paris experienced its worst spike in pollution since records began. Cars were banned from the streets and public transport made free in the city and surrounding areas. Such vehicle bans have only been introduced four times in the last two decades, and never before on consecutive days.
The disruption has cost an estimated €16 million, with more expected in long term health complications caused by such pollution, this marks a growing trend in European cities. Vehicle bans in cities are nothing new - Mexico City, New Delhi and Rome have all banned vehicles in the last year due to severe air pollution.
There are a range of methods of reducing air pollution, from planting more trees in areas of high pollution to installing large outdoor air purifiers, such as those seen recently in Beijing. However, a lack of available data with actionable insights has led to cities across the world experiencing uncontrollable air pollution.
New developments in the gas sensors industry have led to a revolution in low cost air quality sensors, a market that our analysis predicts will be worth more than $3 billion by 2027. The new IDTechEx Research report Environmental Gas Sensors 2017-2027covers the broad range of technologies that make up the gas sensor ecosystem. The report takes a historical look at gas sensing and assesses the new wave of miniaturization, predicting the impact it will have on consumer electronics and the future of smart cities. All the key players are profiled and the market is analysed by application and by sensing technology. 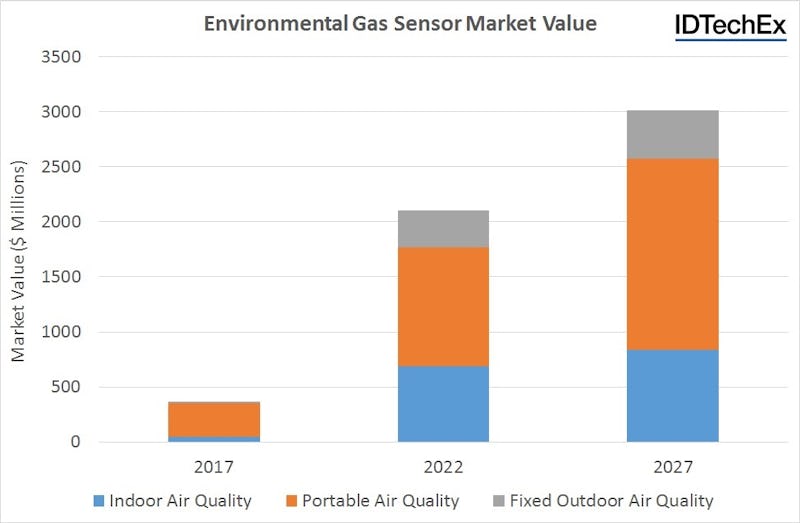 Fig. Environmental gas sensor market value ($ millions). Source: IDTechEx Research www.IDTechEx.com/egs
Air pollution is currently monitored using government sponsored monitoring stations, while these instruments can collect a lot of good quality data, they are expensive to build and maintain (a recent installation in Irvine, California cost more than $1 million) and have a poor spatial coverage (London has a monitoring station density of 0.09 sites/ km2). Several programmes around the world are monitoring air quality on a much more local sale, resulting in actionable insights for residents, city planners and environmental groups.
The Array of Things project in Chicago began in 2014 and is currently installing more than 500 sensor nodes across the city. Each node contains a range of screen printed electrochemical gas sensors, as well as instrumentation to monitor traffic, light and noise pollution. The nodes are designed and manufactured by Waggle, a spin out from the Argonne national laboratory in Illinois, USA. Each node, costing approximately $2000, transmits data to a central server where all data is freely available to residents, businesses, and academics, with the aim of improving air quality across the city. Waggle have received unprecedented interest from other cities to replicate the project, with Seattle expected to be the next metropolis to get the array of things treatment.
In Oslo, Norway, the EU funded city-sense project has utilised public transport to produce a pollution map of the city to inform government and residents alike of potential pollution hotspots. Sensors fitted to city buses and hire bicycles monitor pollutants across the city. Buses have the advantage of following the same route several times a day, so temporal coverage of an area is possible, while bicycles can visit areas that automobiles and large monitoring stations cannot. By travelling through parks, down alleys and side streets, such sensors can detect pollution on a hyper local level.
Finally, as part of a partnership between Uber and Drayson Technologies, drivers have been provided with a CleanSpace tag, an RF powered device that contains a printed carbon monoxide sensor. Data on air pollution will be provided in the form of a graph on the driver's phone, and will also be uploaded to the cloud to create a broader map of pollution in the city. Such a network presents a huge opportunity to allow individuals to see the air they're breathing and contribute to such data to give insights on improving the air quality.
Advancements in the way we monitor gases in urban areas will enable everyone to accurately monitor air quality and provide actionable insights to improve the environment around them.
For more information see the IDTechEx Research report www.IDTechEx.com/egs.
Top image: Paris, photo by D. Pugh, IDTechEx