Will second-life batteries need to compete with new batteries? 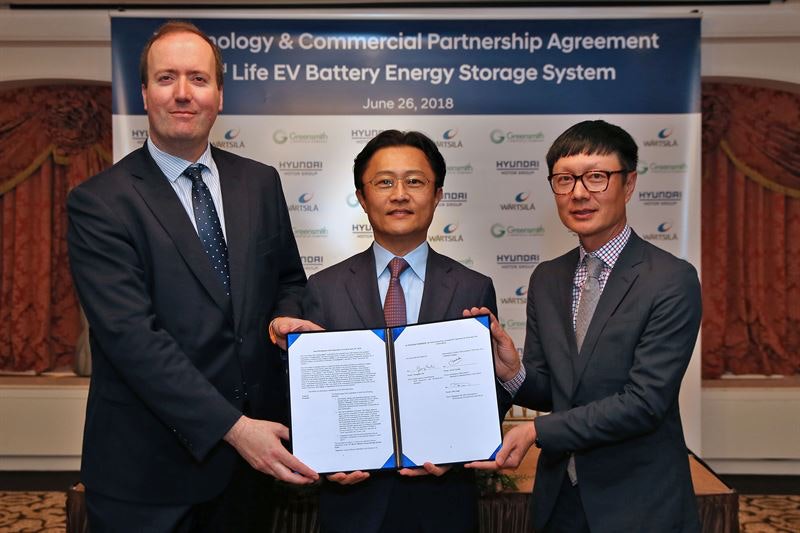 Hyundai Motor Group has recently announced a commercial partnership with energy company Wärtsilä to utilize second-life electric vehicle (EV) batteries for stationary energy storage at both commercial and utility scales. This is not the first piece of news that automotive companies are trying to give a second life to their retired EV batteries as major EV manufactures including Nissan, Renault, BMW, Daimler, BYD etc. have announced various battery second use projects around the world. With the rapid penetration of EVs, increasing attention has been paid to the end-of-life issues of the batteries in the EVs. By 2029, there will be 3 million used battery packs coming out of EVs per year- what happens to the huge amount of retired battery packs which might still hold 70-80% of their initial capacity (see IDTechEx's latest report on Second-life Electric Vehicle Batteries)? Those batteries will definitely be recycled in the end, but might not immediately after they retire from EVs. According to Dr. Youngcho Chi, Executive Vice President of Strategy & Technology Division and Chief Innovation Officer of Hyundai Motor Group: "By repurposing resource-intensive products like EV batteries, we eliminate disposal costs and extend the value of the R&D investment that goes into manufacturing the technology."
While some people in both industry and academia are still discussing about whether battery second use is just a hype, there are several companies that have already brought second-life batteries into commericalization. The first commercialization case is by a California based company FreeWire Technologies which uses second-life batteries from Nissan LEAF to build the mobile charging system called Mobi Charger and provide mobile EV charging services. FreeWire then develops their second generation product called 'Mobi Gen' to provide mobile power for events, disaster relief and construction which replaces traditional diesel generators. According to FreeWire, using second-life batteries helps them reduce their system cost by up to six times compared with new batteries. Powervault, a Uk-based energy storage company also claims that by using second-life batteries from Renault EVs, the cost of their battery system is reduced by 30%.
A constant discussion on the feasibility of battery second use is whether the decreasing cost of new Li-ion batteries will push second-life batteries out of the market. After 8-10 years when the batteries retire from the EVs, will new-generation batteries with improved performance and cheaper price make second-life batteries unattractive at all? The answer depends on the cost of repurposing second-life batteries and the business models. According to BYD, the testing, grading and repackaging constitutes the higest portion of the cost of second-life batteries. Advanced technologies such as BMS that could track the historical usage data of the battery at the cell level could greatly reduce the cost of testing. The historical data is just like a CV of the battery which will tell the State of Health (SoH) of the battery when they retire from the cars.
The business model is also the key to the feasibility of second-life batteries. If we think about the value that second-life batteries can offer - the ability to store energy and release it when needed - it is no different from new batteries. However, to sell second-life batteries as products, you need to compete with new batteries in price, to provide warranties and you stop harvesting value from the batteries once they are sold. As products, second-life batteries are 'inferior' and customers want discount because they are 'used' products. When thinking about what customers need from the batteries, customers of stationary storage batteries don't care how fancy the batteries is, whether it is new or old, as long as they can provide the energy storage services that they need to either cut utility bills or generate revenues by interacting with the grid. Second-life batteries, although with degraded capacity, can still provide various energy storage services. According to The Mobility House, a Munich-based technology company that works with several auto companies to provide grid services using second-life batteries, in certain applications such as primary control reserve, the charging and discharging pattern is like a 'message' to the battery and second-life batteries can be used for at least another 10 years after retiring from electric cars. In service-based business models, second-life batteries don't need to compete with new batteries in price - they just need to provide the required capacity to store energy in suitable applications. For more information on the second-life battery market and business models, please see IDTechEx's latest report on Second-life Electric Vehicle Batteries.
If you want to learn more about second-life EV batteries, be sure not to miss our next leading event on the topic: Electric Vehicles: Everything is Changing, USA 2018 on 14-15 Nov 2018 at Santa Clara Convention Center, CA, USA hosted by IDTechEx.
Top images: Wärtsilä