Nantennas and metamaterials for EV photovoltaics

Photovoltaics have been fitted to the roof of some cars for over 15 years. A conventional flat panel adds a few miles to the range of a pure electric car or cools the car while it is parked and performs other "hotel" functions. Photovoltaics are often used on the recharging station panoply. We need more.
The new thin film photovoltaics are flexible, so it goes over more of the car but it is opaque and only a few percent efficient as yet. The most efficient photovoltaics in thin film form, at around 41% efficiency - is used on satellites, employing up to 30 GaAs and Ge layers tuned to different wavelengths. Currently, it is unaffordable on cars, though manufacturers Boeing Spectrolab think that will not always be the case. 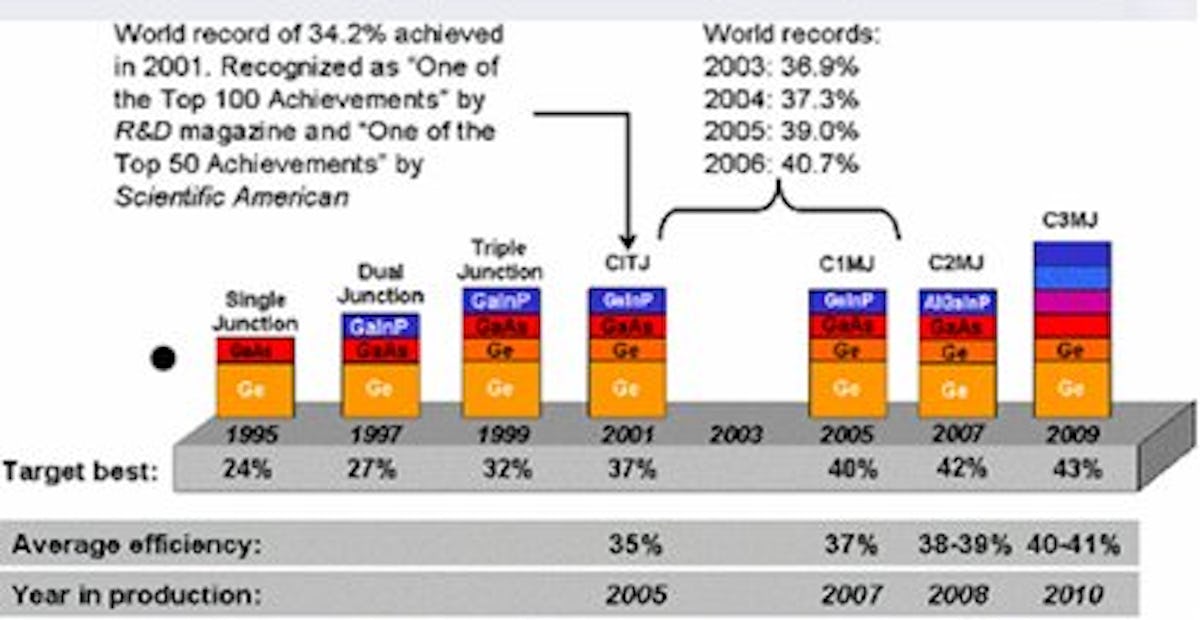 Alternatively, new affordable forms of highly efficient photovoltaics are sought in thin flexible form.
Here one option is trillions of antennas smaller than the wavelength of light - nantennas - printed on plastic film, each having its input rectified by a printed diode. This is being investigated by Idaho National Laboratory and printed single layer ballistic diodes from Manchester University in the UK are a candidate for the rectification.
Already, Dr Steve Nowak of Idaho National Laboratory claims, "We're very good at tuning antennas to one specific frequency and very good at making them broadband".
Near-term (2-4 years) and long-term (3-6 years) applications are being pursued, including:
INL nantennas on film

Source: INL
The INL is capable of producing antennas that can absorb electromagnetic radiation at the near and mid infrared part of the spectrum. Some of these wavelengths penetrate clouds and deliver useful energy levels to the surface of the Earth.
Drawing from roll to roll processing expertise at Microcontinuum, a Cambridge, USA, based start up that spun out of Polaroid, INL is able to print (using e-beam UV lithography printing) millions of nano-sized antennas per square inch. INL claims that the ability to harvest infrared energy means that these antennas can convert residual heat into electricity even after the sun has gone down with a collection that is four times more efficient than in conventional photovoltaics.
There is a need for further work on the rectification of that signal though, because at IR wavelengths, frequencies are in the range of 30 THz.

Metamaterials are also made by printing features smaller than the wavelength of light on plastic substrates. Here a combination of a split ring (ring oscillator) and microwire give negative permeability and permittivity (dielectric constant) resulting in negative refractive index.
Metamaterial ring oscillators 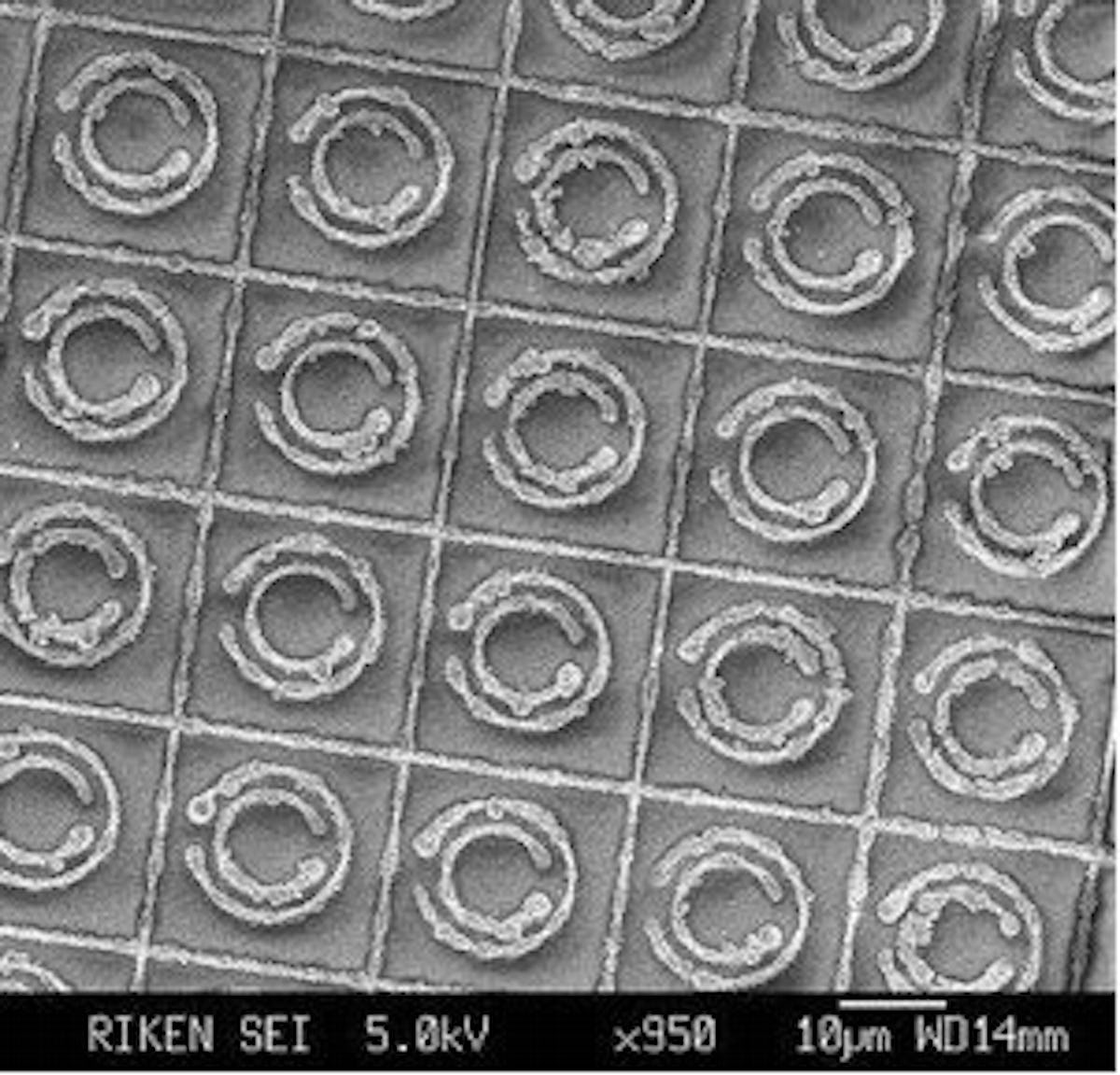 Source: Duke University
In 2010, a group of scientists led by researchers from the California Institute of Technology (Caltech) has engineered a metamaterial, following earlier work at Duke University USA and Imperial College UK and in Germany.
This new type of negative-index metamaterial (NIM) is simpler than previous NIMs—requiring only a single functional layer—and yet it is more versatile, in that it can handle light with any polarization over a broad range of incident angles.
And it can do all of this in the blue part of the visible spectrum, making it "the first negative index metamaterial to operate at visible frequencies," says graduate student Stanley Burgos, a researcher at the Light-Material Interactions in Energy Conversion Energy Frontier Research Center at Caltech and the paper's first author.
"By engineering a metamaterial with such properties, we are opening the door to such unusual—but potentially useful—phenomena as superlensing (high-resolution imaging past the diffraction limit), invisibility cloaking, and the synthesis of materials index-matched to air, for potential enhancement of light collection in solar cells," says Harry Atwater, Howard Hughes Professor and professor of applied physics and materials science, director of Caltech's Resnick Institute, founding member of the Kavli Nanoscience Institute, and leader of the research team. What makes this NIM unique, says Burgos, is its engineering.
"The source of the negative-index response is fundamentally different from that of previous NIM designs," he explains. Those previous efforts used multiple layers of "resonant elements" to refract the light in this unusual way, while this version is composed of a single layer of silver permeated with "coupled plasmonic waveguide elements."
Surface plasmons are light waves coupled to waves of electrons at the interface between a metal and a dielectric (a non-conducting material like air). Plasmonic waveguide elements route these coupled waves through the material.
Not only is this material more feasible to fabricate than those previously used, Burgos says, it also allows for simple "tuning" of the negative-index response; by changing the materials used, or the geometry of the waveguide, the NIM can be tuned to respond to a different wavelength of light coming from nearly any angle with any polarization.
"By carefully engineering the coupling between such waveguide elements, it was possible to develop a material with a nearly isotopic refractive index tuned to operate at visible frequencies."
Caltech metamaterial 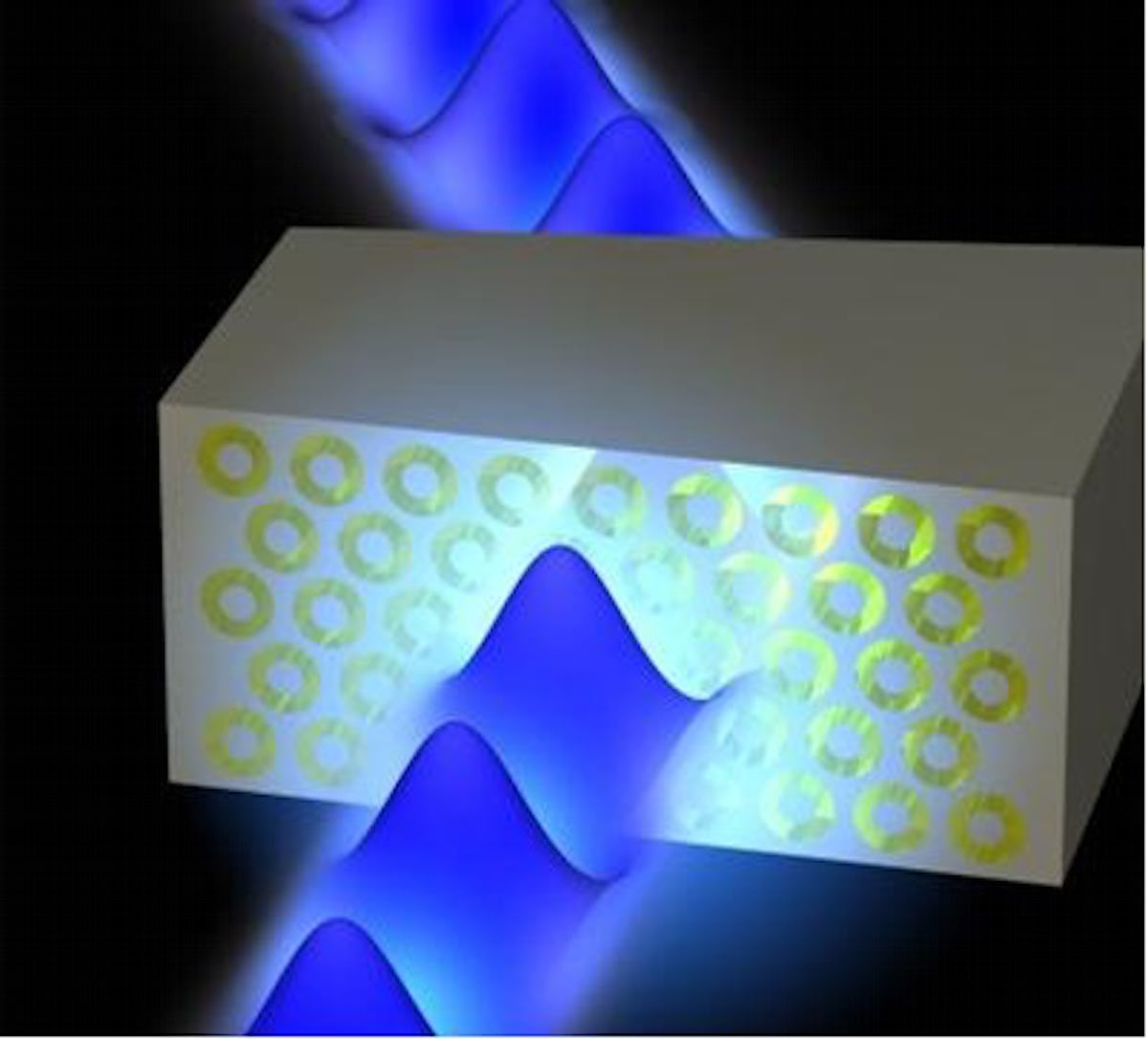 Source: Caltech, Stanley Burgos
This sort of functional flexibility is critical if the material is to be used in a wide variety of ways, says Atwater.
"For practical applications, it is very important for a material's response to be insensitive to both incidence angle and polarization," he says. "Take eyeglasses, for example. In order for them to properly focus light reflected off an object on the back of your eye, they must be able to accept and focus light coming from a broad range of angles, independent of polarization. Said another way, their response must be nearly isotropic. Our metamaterial has the same capabilities in terms of its response to incident light."
This means the new metamaterial is particularly well suited to use in solar cells, Atwater adds. "The fact that our NIM design is tunable means we could potentially tune its index response to better match the solar spectrum, allowing for the development of broadband wide-angle metamaterials that could enhance light collection in solar cells," he explains. "And the fact that the metamaterial has a wide-angle response is important because it means that it can 'accept' light from a broad range of angles. In the case of solar cells, this means more light collection and less reflected or 'wasted' light."
For more read: Energy Harvesting and Storage for Electronic Devices 2010-2020 and Thin Film Photovoltaics and Batteries 2010-2020 and attend Photovoltaics USA 2010 .