Taiwan goes up market with EVs

Taiwan makes electric bicycles but mainly with most of the added value being in China, often by collaboration, in joint ventures with Chinese manufacturers, Giant and Merida being examples. There are USA/Taiwan collaborations of electric bikes as well, such as EV Global Motors/ Fairly. Subsidies for use of e-bikes in Taiwan gave not generated as much business as hoped.
Taiwan has been making 70% of the mobility electric vehicles for the disabled that are purchased in the world. This year, that amounts to 1.2 million on IDTechEx analysis (new IDTechEx report Electric Vehicles 2010-2020) but China has been taking market share from Taiwan in this sector, helped by cheap labor and a rigged exchange rate.
So now Taiwan is moving further up market in EVs, with a major initiative in the USA this week. This time it is cars such as the one below, with the emphasis on innovation, superior value engineering and quality.
Tobe M'car. (CNA) 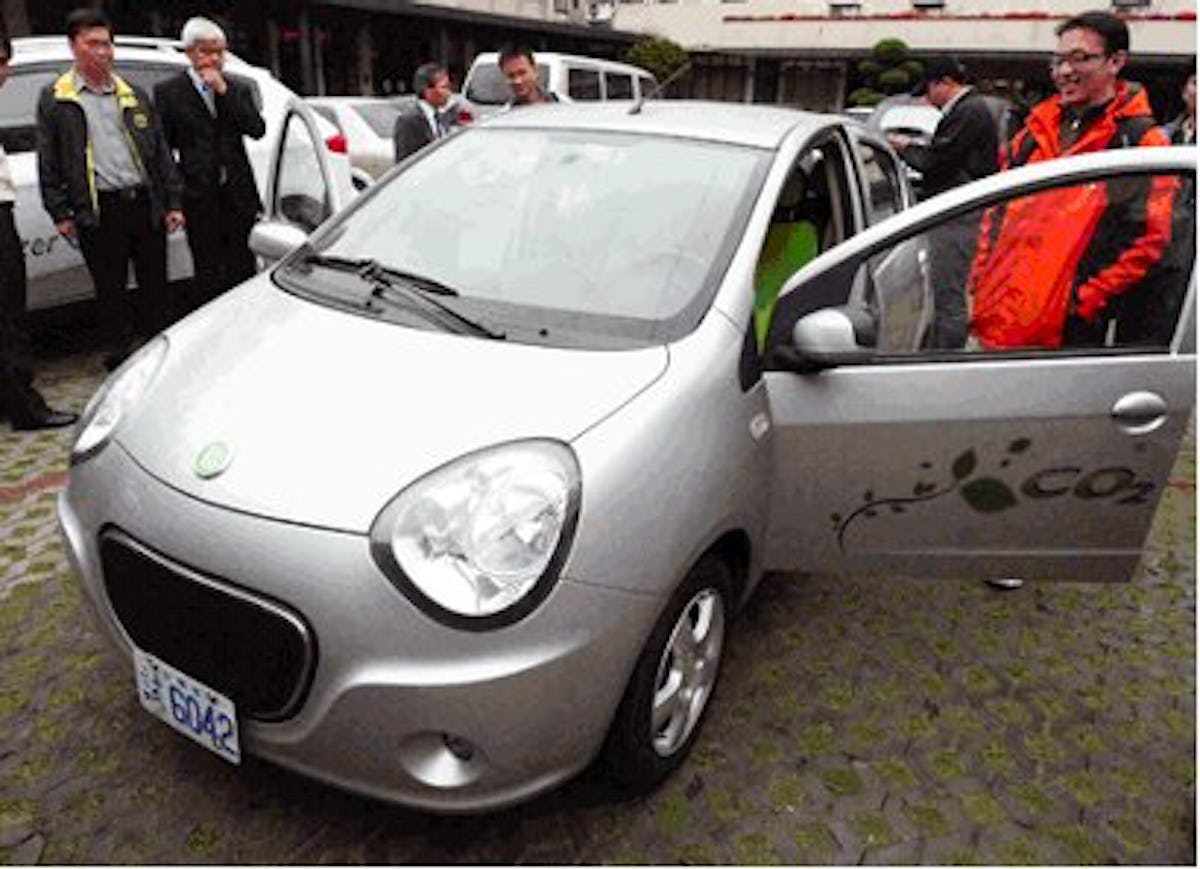 Yulong Motor Co. Ltd.
Taiwan's Luxgen will start selling electric cars in 2010. Drivetrain for the large, 7 seater, pure electric Luxgen MPV is from AC Propulsion and rated at 180-kW (245-hp), with 195-lbs/ft of torque giving 60 mph in 8.6 seconds and top speed is 90-mph. Range is an acceptable 217 miles at 25 mph, thanks to a lithium-ion battery pack. (Most of the world's pure electric cars have a range of 50 miles or less which is unacceptable to most people) Luxgen will also do a pure electric SUV.
E-One Moli Energy supplies its lithium-ion batteries used in BMW's MiniE electric car, though LiFeBATT is another Taiwanese traction battery maker with global respect. Fukuta Electric & Machinery has supplied electric motors for the Tesla Roadster, BMW's MiniE and the Luxgen electric car. 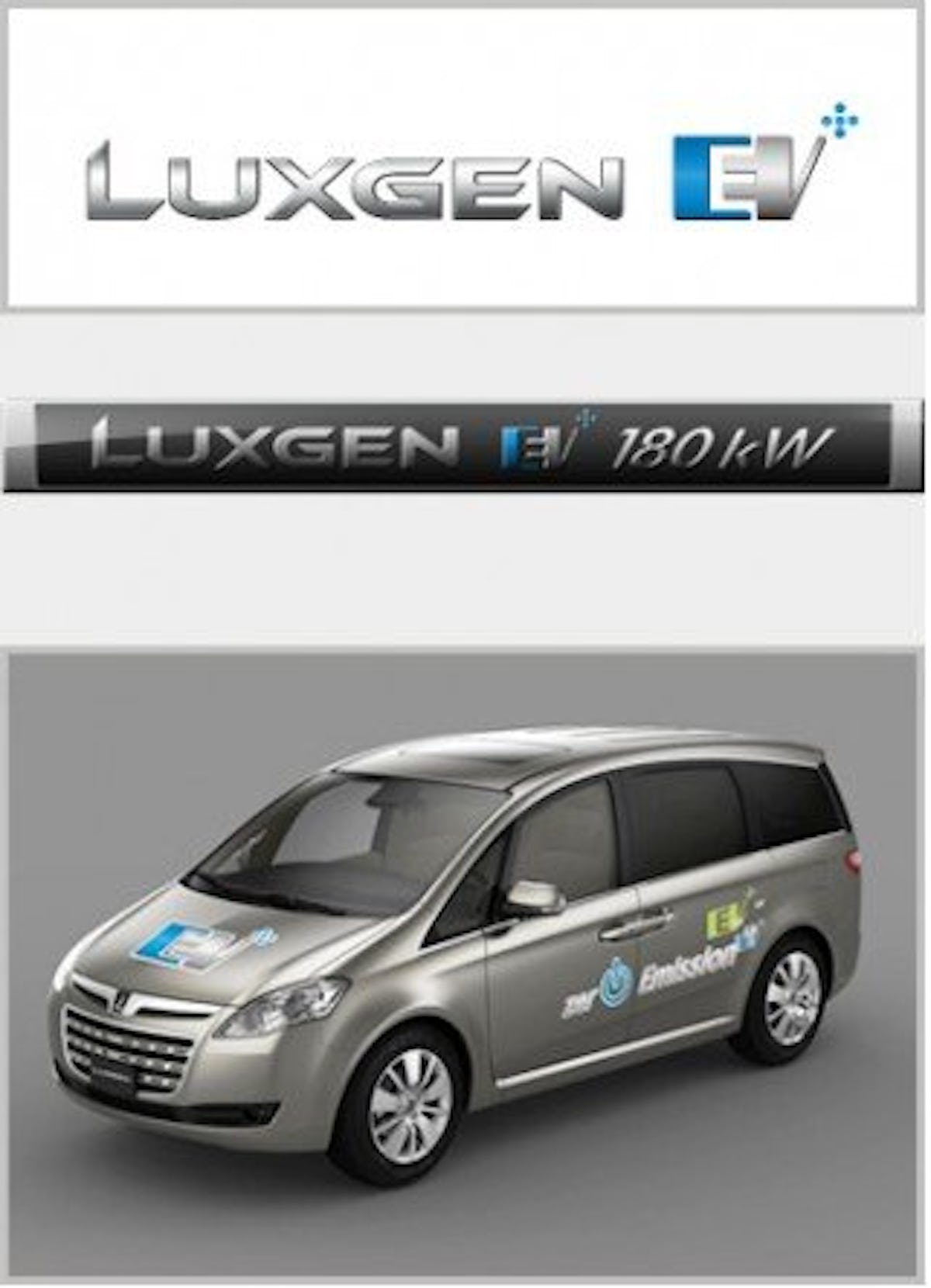 Taiwan ROC electric vehicle manufacturers are exhibiting at the Taiwan Automotive International Forum and Exhibition in Detroit June 21 to 22. This event is organized by the Ministry of Economic Affairs MOEA to promote the Taiwan electric vehicle industry and create global collaborative opportunities for them.
"With 49 new products and 59 key technologies on display, the show is a certainty to spark interest in Taiwan's EV industry," says an MOEA spokesman.
Taiwan's efforts in developing smart cars and EVs, and its energy storage and control technologies, are being shared in a series of panel discussions during the event.
"We hope to assist local businesses and their U.S. partners in making sizable inroads into the global market. Taiwan's well-developed auto industry chain has perfectly positioned the country to benefit from this emerging industry" said the spokesman.
A 30-member delegation led by MOEA Deputy Minister Hwang Jung-chiou will is on hand to meet with auto industry executives and representatives from R&D organizations. This includes officials from the Taiwan External Trade Development Council (TAITRA), Industrial Technology Research Institute, Automotive Research and Testing Center, Simplo Technology Co. Ltd., and Taipei-based China Motor Corp.
Over 100 U.S. auto executives will meet the delegation, including Alan Taub, vice president of global research and development at General Motors Co., and Susan Cischke, vice president of sustainability, environment and safety engineering at Ford Motor Co. MOEA officials are also scheduled to visit U.S. carmakers GM and Ford, and leading parts and components suppliers.
Exploring collaborative business opportunities in the Asia-Pacific market is a top priority for discussion during these meetings. The ITRI and ARTC will sign agreements on joint technological development and product certification with Underwriters Laboratories Inc. and the Society of Automotive Engineers International. After Detroit, Taiwan delegation will hold a business development session in Los Angeles June 25. Write to Meg Chang for more.

Taiwan has businesses that make complete automobiles, parts and accessories as well as one of the world's largest electronics industries with companies that aim to tap growth of the electric car market.
Taiwan's suppliers of high-quality auto parts are aiming to expand their market share with major automakers around the world

Another target for these Taiwanese auto and parts manufacturers is India. In India, electric cars are expected to account for nearly five per cent of the overall automobile EV market in the next seven years, rising rapidly thereafter. Of course, India has its own formidable EV industry including innovative systems such as the hybrid retorfit kit of KPITCummins to be launched in late 2010.
Domestic auto sales in India rise by 25 per cent in currency terms this year. This surge in demand for auto components and accessories presents an opportunity for partnerships with Taiwan that help cut manufacturing cost, boost energy savings and provide greater driver safety. Taiwan's shipments of automotive parts to India accounted for less than one per cent of its total car part exports in the first quarter of this year, so there is plenty to go for.
Despite all this, Taiwan has not abandoned electric bicycles. In 2010, the Industrial Technology Research Institute (ITRI) in Taiwan announced its successful development of a super-slim rim motor that can be used on ordinary and folding electric bicycles conferring substantial weight and thickness reductions - 50% lighter and and 30% thinner. ITRI said that the newly developed rim motor is highly regarded by many bicycle makers in Taiwan.
Dr. Wu Tung-chuan, ITRI`s vice president and general director of Mechanical and Systems Research Laboratories (MSL) under ITRI, pointed out that the new rim motor is expected to be easily installed on most bikes, turning them into e-bicycles and helping local e-bike makers shorten product development period. Also consumers would have more options with the rim motor. James Wang, deputy director general of MSL, said that the rim motor model adopts the innovative axial flux motor technique, making it owns a thinness of only one inch and weighs only two kg, but generating a two- to three-folds torque that generated by the same unit weight of traditional counterparts. ITRI is applying patents for the rim motor, which can easily be installed on the side of front or rear wheel of a traditional bicycle, achieving the goals of simplifying e-bike production processes and adding new values to bike products.
Many local bicycle makers have expressed high interests in the innovative rim motor. Pacific Cycle Inc., a major maker of high-end folding bikes, said that it would more vigorously tap into the e-bike sector in the future. Pacific Cycle has cooperated with ITRI in adopting the super-slim motor on some of the company`s models for exploring possible business opportunities.
Faraday's original electric motor was a disc motor, the equivalent of the disc brake, yet today's traction motors are cylindrical, equivalent to the drum brake. Come Back Faraday All Is Forgiven seemed to be the message of EVO Electric at a recent conference when they also announced a very exciting "axial flux motor" ie his original version like a disc brake, with huge savings in materials and space and a road map to a remarkably simple hybrid car that could even be a £10,500 retrofit, replacing the gearbox and with a two year payback on a commercial vehicle. Double the miles per gallon of polluting internal combustion engined vehicles is in prospect. The only cited disadvantage was the escalation in cost and complexity if the vehicle is to go at over 100 mph.
Also attend: Future of Electric Vehicles which uniquely covers the whole electric vehicle market - land, sea, air whether hybrid or pure EV - with emphasis on future breakthroughs.