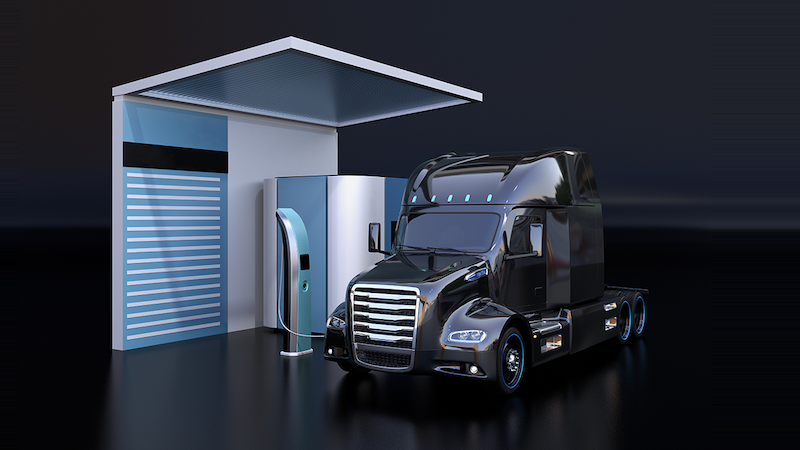 Though battery-electric models currently make up only a small fraction of total global truck sales (around 0.4% in 2021), it is already clear that the transition from diesel combustion engines to zero-emission technologies is well underway. Volvo Trucks suggest that they expect by 2030, more than 50% of the trucks they sell each year should be electric. Truck OEMs face rising pressure to reduce the environmental impact of their vehicles, with legislation enacted to reduce exhaust greenhouse gas emissions and improve urban air quality. But, alongside this challenge, OEMs are seeing growing demand from their customers who need zero-emission solutions to help deliver their corporate emission reduction targets. As a result, the number of available electric truck models is increasing, with OEMs ramping up production volumes of these models. In their report, "Electric and Fuel Cell Trucks 2023-2043", IDTechEx forecasts that the truck market is at the beginning of a relatively rapid shift to electric powertrains.
US Truck Market Gets Choice of Class 8 Electric Trucks
In North America, electric heavy-duty truck options have been limited until this year. However, in 2022 several major OEMs (including Daimler, Volvo, and Tesla) began series production of Class 8 electric trucks. Perhaps the earliest anticipated announcement was from Tesla, who, at the start of October, confirmed that its' Tesla Semi had finally gone into "early production" at Tesla's Nevada Gigafactory (the original production date was scheduled for December 2019). The first 15 electric Class 8 trucks will be delivered to Pepsi Co in December 2022. What makes this announcement significant is the superior performance promised by Tesla when compared to other available electric models; up to 500 miles of range (when loaded on a flat route), no sacrifice of payload capacity, Megachargers capable of returning 70% of range in 30 mins charging, and on-road energy consumption of less than 2 kWh/mile. The Tesla Semi could offer both the performance and total cost of ownership that make it competitive with current diesel trucks on some long-haul operations. The large order book for the vehicle demonstrates plenty of companies are keen to explore the technology and 2023 should see several of them get the opportunity to put Tesla's claims to the test. Tesla have tentatively set themselves the goal of an annual production of 50,000 Semi's per year in 2024.
Moving on From Electric Prototypes to Fleet Replacement
Sustainability is an increasingly important concern in the boardroom of major corporations, with many making public commitments to decarbonize their business operations in line with the UNFCC Paris Agreement and national net zero emission targets. Transitioning truck fleets from diesel engines to zero-emission powertrains is a highly visible way for companies to demonstrate their green credentials to their customers. While IDTechEx believes the initial deployment of electric trucks will be best suited to regional and urban routes, ongoing development work in battery technology, improved powertrain efficiency, and optimization of charging strategy will, over the next two decades, see future generations of electric truck able to meet the energy demand of all but the most arduous of long-haul duty cycles. 2023 promises to be an exciting year, with companies able to move on from small pilot tests of electric trucks to genuine replacement of diesel-fuelled fleet vehicles in cases where the duty cycle is compatible with electric operation. However, given the initial range limitations of the technology, OEMs must work with their customers on each deployment to avoid potential disappointment.
To find out more, the IDTechEx "Electric and Fuel Cell Trucks 2023-2043" report is designed to help businesses plan for the future in this dynamic market. The report contains 80 forecast lines, giving a twenty-year outlook for zero-emission truck sales, market penetration, battery demand, fuel cell demand, and market value, with separate forecasts for medium and heavy-duty trucks.
This report is part of IDTechEx's broader mobility research portfolio, tracking the adoption of electric vehicles, battery, and technology trends across land, sea, and air. Find out more at www.IDTechEx.com/Research/EV.

Why Hydrogen Fuel Cell Adoption Is Accelerating in Marine Markets
The Transition to Oil in EV Thermal Management
Micro EVS: Neither Fast nor Far
Join Our Webinar on Marine Fuel Cell Markets: An Ocean of Opportunity