Third generation lithium-based traction batteries can be loosely defined as relatively safe versions with superior energy density as now demanded by plugin hybrids not just pure electric vehicles.
Add to that good affordability by avoidance of rare materials. In these batteries "beyond lithium-ion" there are often solid electrolytes and sometimes they are inorganic and therefore incapable of burning unlike most organic ones. One way or another, energy densities of hundreds of watts per kilogram at cell level (in the Batscap case, 110 Wh/kg at module level so far) are in prospect vs rarely more than 150 Wh/kg at cell level with the first and second generation lithium-ion batteries that rule the roost today.
Lithium-ion batteries involve lithium ions being intercalated and de-intercalated at electrodes during cycling. Other batteries involve lithium ions but are not called lithium-ion because they work in another way. There are single use versions but now there are rechargeable versions arriving earlier than most pundits thought possible.
Sion Energy, PolyPlus, Bolloré Batscap, Oxis Energy and others develop and in some cases produce lithium metal - sulfur or lithium metal polymer rechargeable wound batteries in various chemistries.
The Sion ones have flown in unmanned aircraft and have been used in land-based military vehicles and the Bolloré Batscap one -lithium metal polymer - is used in its pure electric car.
Batscap says:
The elementary electro-chemical cell of Lithium Metal Polymer battery (LMP battery) is based on the utilisation of four components.

This completely solid elementary cell is built on two reverse-function electrodes : anode ensures the supply of lithium ions during discharge and cathode acts as a receptacle where lithium ions come slotting in. These two electrodes are separated by a solid polymer electrolyte which conducts lithium ions. Conductivity of ions is carried out by dissolving lithium salts in polyoxyethylene. To obtain optimal conductivity, temperature of the battery must be maintained between 80°C and 90°C.
Anode is in lithium metal whereas cathode is made of a material composed of vanadium oxide, electrolyte and carbon which, form a plastic composite. A current collector connected to cathode provides electric connection.
The company adds:
The elementary cell (element) of Lithium Metal Polymer technology is completed by assembling ultra-thin films, with a thickness of a few microns. Films are layered, coiled, then compressed into a prismatic shape.
Total thickness of the resulting laminate is in a range of 150 µm, and depends on electrical specifications required by the application. In fact, modifying thickness of the film allows to optimize specific performances to meet needs of a large number of application. For instance, an assembly of "thick" films allows to obtain a "high energy" configuration whereas thinner elements would lead to a high power configuration.

Flexibility of this concept, based on the assembly of thin films, is remarkable as elements of different thickness, width and length can be produced on the same production equipment.
Module construction
Applications which use industrial batteries have wide energy storage requirements, both electrically (capacity, voltage, discharge rate) and mechanically (geometry, volume). So module has been designed with flexibility in mind.
Its construction is based on parallel and series-connected elements and cells. Cell contains particular capacity according to its characteristics and the number of elementary units connected in parallel. Then, cells are series-connected then inserted into a special "packaging", in order to give module its required voltage.
It is therefore easy to build modules of different shapes and different electrical characteristics without modifying industrial manufacturing equipment. 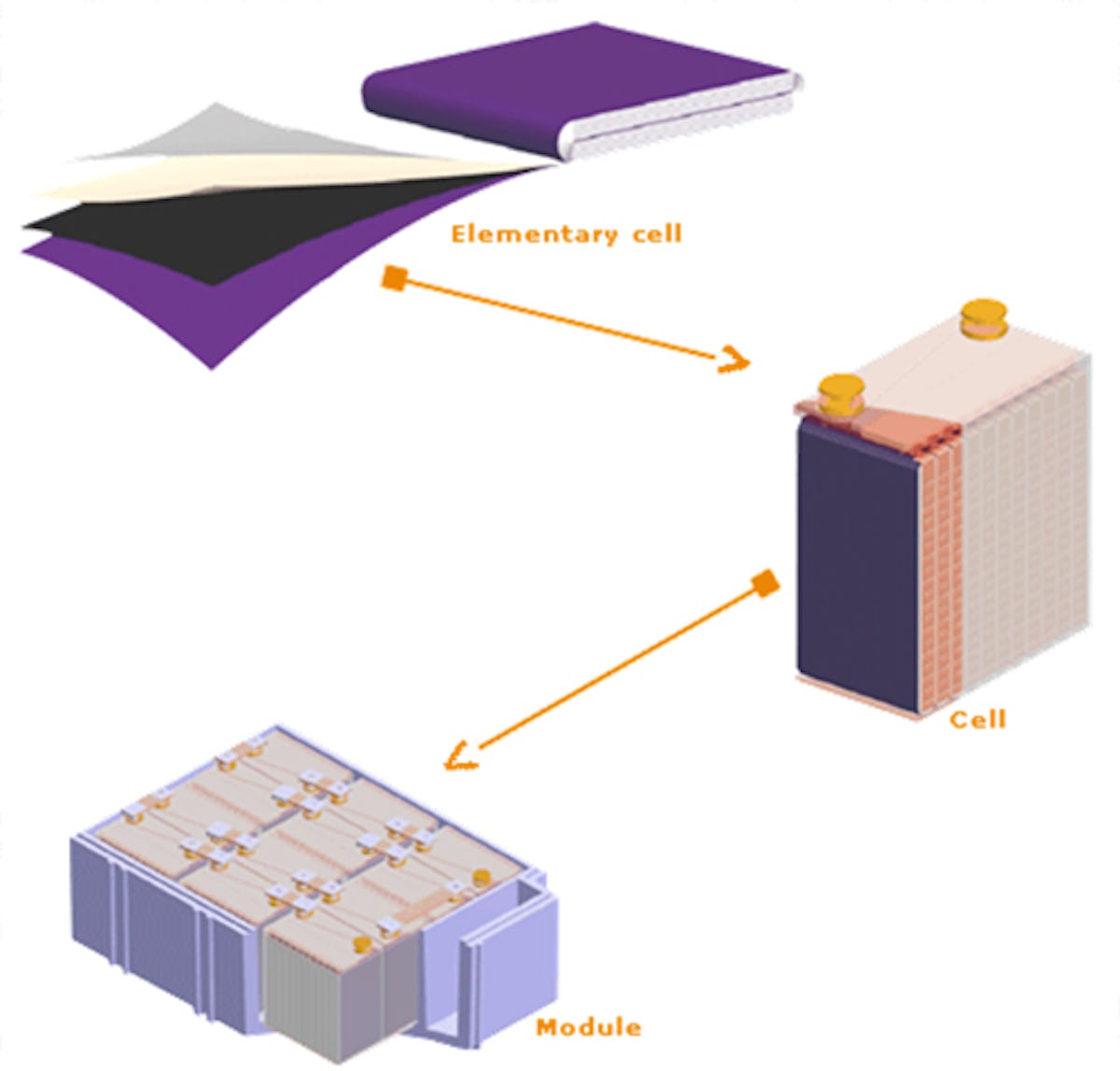 Under a United States Advanced Battery Consortium (USABC) contract, 3M, Hydro-Québec, and Argonne National Laboratory joined technologies to develop and test the first solid electrolyte lithium battery back in 1980. The lithium polymer battery relies on thin-film technology, with composite films that are only 100 microns thick. It's a solid state battery that can be wound and shaped to suite the application. It uses a plastic electrolyte.
3M expects that a typical EV battery pack would weigh in the order of 224 kg, which could provide as much as 45 kWh of energy. Oxis has some lithium metal polymer batteries in unmanned land vehicles and is likely to have them in a microcar and a motorcycle soon on a trial basis at least. Often, the LMP battery cathode is a vanadium oxide composite.
In 2011, Aruna Zhamu et al reported new strategy for "reviving rechargeable lithium (Li) metal batteries and enabling the emergence of next-generation safe batteries featuring a graphene-supported Li metal anode, including the highly promising Li-sulfur, Li-air, and Li-graphene cells with exceptionally high energy or power densities." All the Li metal anode-based batteries suffer from a high propensity to form Li dendrites (tree-like structures) at the anode upon repeated discharges/charges.
A dendrite could eventually penetrate through the separator to reach the cathode, causing internal short-circuiting and even explosion, the main reason for the battery industry to abandon rechargeable lithium metal batteries in the early 1990s.
By implementing graphene sheets to increase the anode surface areas, one can significantly reduce the anode current density, thereby dramatically prolonging the dendrite initiation time and decreasing the growth rate of a dendrite, if ever initiated, possibly by a factor of up to 1010 and 105, respectively.
Bar Ilian University in Israel works on rechargeable lithiated silicon-sulfur battery prototypes. Korea Electronics Technology Institute works on tailored materials for high performance lithium -sulfur batteries.
Tokyo Metropolitan University is progressing a rechargeable lithium-metal battery using a 3DOM polyimide separator. IBM, PolyPlus, Argonne National Laboratory and others develop lithium air rechargeable batteries. These are likely to be later than lithium sulphur in gaining widespread application in electric vehicles. For example, the IBM speaker at the IDTechEx Electric vehicles Land Sea Air event saw them being trialled for several years and maybe rolled out from 2020.
For more read Electric Vehicle Traction Batteries 2012-2022.