Supercapacitors have drawn much attention in recent years due to their high power density, reversibility, and long cycle life. They are being used in automotive applications as stop-start idle elimination system in cars. This can reduce up to 15% of fuel costs in urban driving and reduce related CO2 emissions. For example, Lamborghini just announced that they will use Maxwell Technologies supercapacitors for this purpose in all Lamborghini Aventador cars. Stop-start idle elimination systems are being adopted mainly in Europe as legislation now requires that all cars will need to comply with the a fleet-average emissions target for passenger cars of 130 g CO2/km by 2015 and 95 g CO2/km by 2020.
We have seen as well applications of supercapacitors in wind turbines in blade pitch angle systems, where batteries are not reliable enough because of their operational temperatures, hence they can risk millions of dollars in equipment in case of electrical failure. Supercapacitor companies like Ioxus and Maxwell Technologies are making tens of millions of revenues in these applications. The technologies, companies, applications and markets are covered in the IDTechEx reports "Electrochemical Double Layer Capacitors: Supercapacitors 2013-2023" (www.IDTechEx.com/edlc) and "Supercapacitor/Ultracapacitor Strategies and Emerging Applications 2013-2023" (www.IDTechEx.com/superapps).
There has been hype in discussions about the use of graphene and carbon nanotubes (CNT) in supercapacitors, however we have not seen yet any of these materials being used in a supercapacitor product in the market. Some graphene companies such as Graphenea in Spain say they will be conducting trials in supercapacitors in 2013, and they foresee some issues in implementing them at the manufacturing level. Whilst Maxwell Technologies, the market leader in the supercapacitor industry, is following the developments on the application of graphene and carbon nanotubes they say they still have not found an application that justifies the increased cost of the use of these technologies when their efforts are focused to substitute low cost technologies such as lead acid batteries. More on this is covered in "Supercapacitor/Ultracapacitor Strategies and Emerging Applications 2013-2023" (www.IDTechEx.com/superapps) which analyzes the go to market strategy of companies and optimal approaches, based on the user supply chains and needs.
However IDTechEx found that other companies are actually focusing in niche markets for supercapacitors where the use of carbon nanotube technologies represents a justifiable value proposition. We saw this in our event Supercapacitors USA 2012 in Washington DC.
The airline industry releases an incredible amount of carbon into the atmosphere on a daily basis. Annually, this figure amounts to more than 500 million tons of CO2, which represents 2-3% of the world's total carbon emissions. Those emissions are growing rapidly as emerging economies expand and modernize across the globe, offering travel to greater numbers of their citizens.
Imagine a Boeing 747-400, which weighs 875,000 lbs and which has to reduce its speed from 160 to 10 miles per hour in 30 seconds when it lands; that is an energy dissipation of 280 kWh which is dissipated in 30 seconds. It represents a power of 33.6 MW, which is equivalent to the rated power of a 16 wind turbine wind farm. No wonder a plane has to change tires every 7 landings, all this energy is wasted! Now, planes have the highest energy consumption in a very short period of time, when they take off. 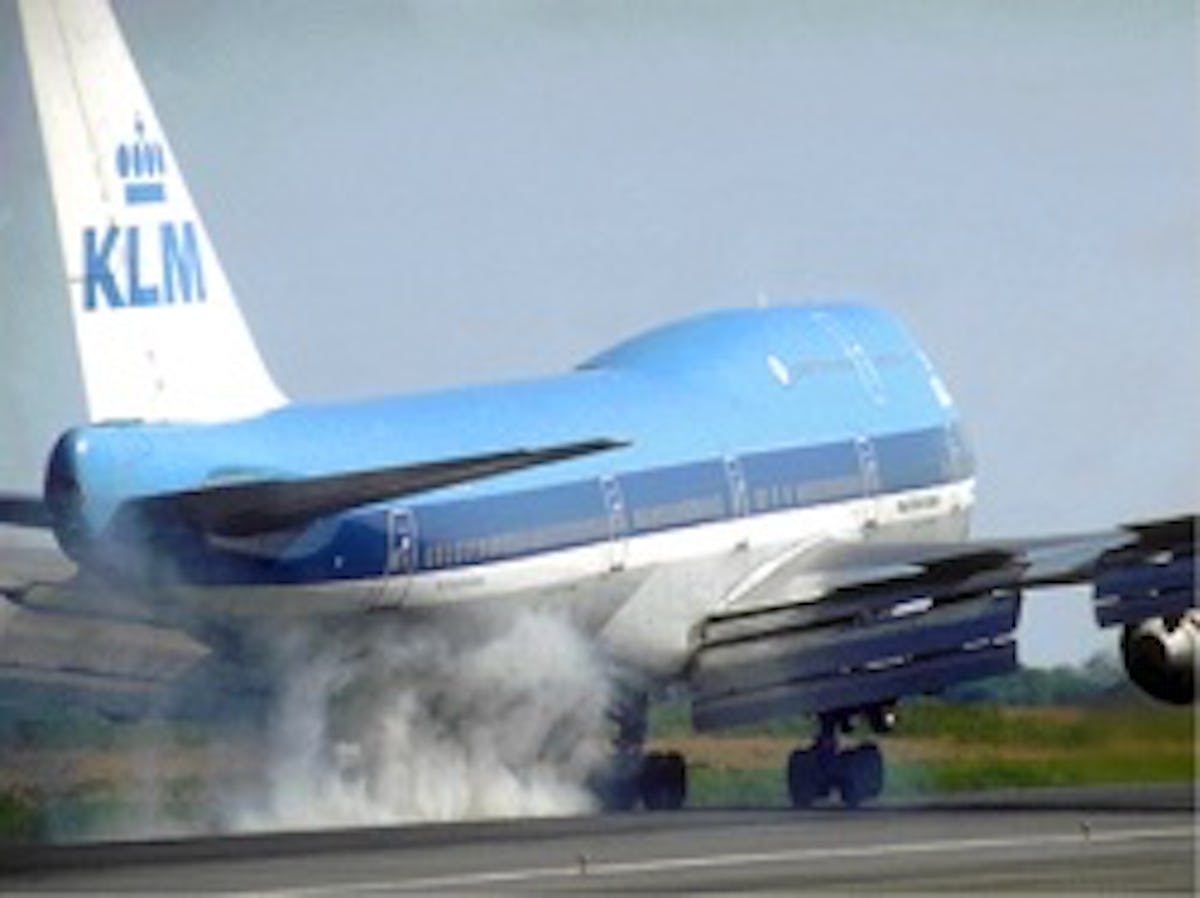 Source: Extreme Capacitor
Extreme Capacitor Inc. sees an opportunity to recover this energy - and save some of the tens of USD billions spent each year on fuel around the world for airplanes to take off and taxi around the airports. They intend to use Carbon Nanotubes (CNTs) in supercapacitors to recover that amount of energy. The company has developed a proprietary process in which they obtain CNT filaments. This method will allow them to get 3D structures with high packing factor, high strength and high surface area.
Figure 2. Extreme Capacitor carbon nanotube filaments 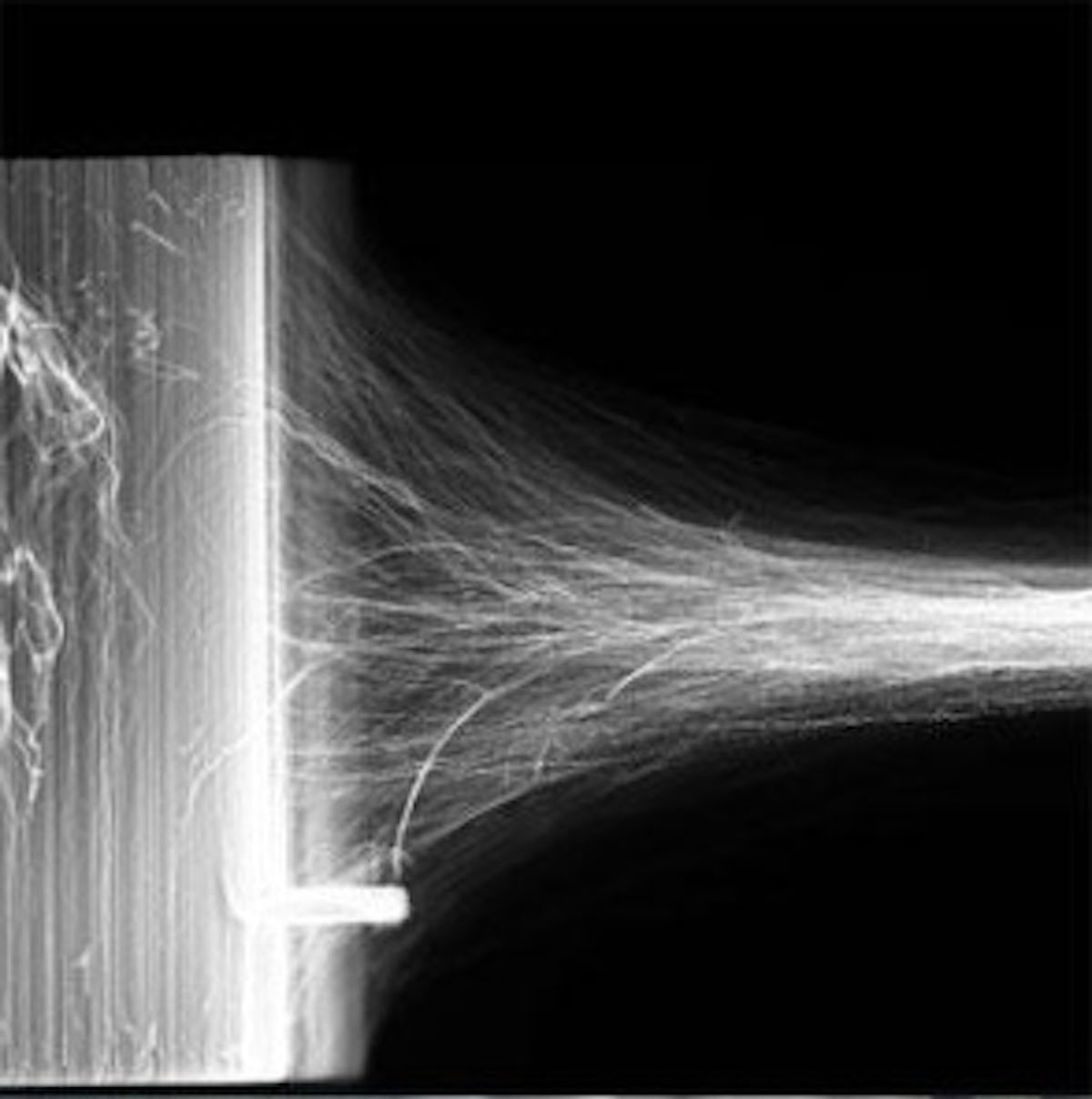 Source: Extreme Capacitor
Based on our previous research this could be an opportunity of a niche market that justifies the extra cost of CNT in supercapacitors, since currently supercapacitors have only opened large scale application markets where cost and reliability are the driving technology adoption factors.
With the integration of CNTs in supercapacitors the company aims to deliver double the energy density of a lithium ion battery. Today a lithium battery pack price is around 500-600 USD/kWh. Extreme Capacitor representatives claim that an initial price would be around the 800 USD/kWh range, but they think they can reach with an automated scale production a price of around 500 USD/kWh. You may think this cost reduction will take some time. However, if one realizes that supercapacitors have been reducing their prices at a faster pace than batteries (from a price of hundreds of thousands USD/kWh at pack level in the year 2000, to around thousands USD in 2010) this may only be a matter of some years.
According to IDTechEx research, Electrochemical Double Layer Capacitor or Supercapacitors will become an $11 billion industry in 2023. Under a global need to optimize the use of energy, supercapacitors have a large role to play in this field in many industries. Applications as the one discussed in this article are emerging everywhere and players in the industry are rushing to take them. As it is in transport, it is in industrial and electronics applications, where for energy management and wireless communications supercapacitors are an enabling technology. For full analysis of the markets and technologies for small devices, read the IDTechEx report "Batteries and Supercapacitors for Smart Portable Devices 2013-2023: Markets, Technologies, Companies" (www.IDTechEx.com/portable). The use of emerging materials such as graphene and carbon nanotubes will find more niche markets to reach the industrial scale, the case of supercapacitors it is just an example.