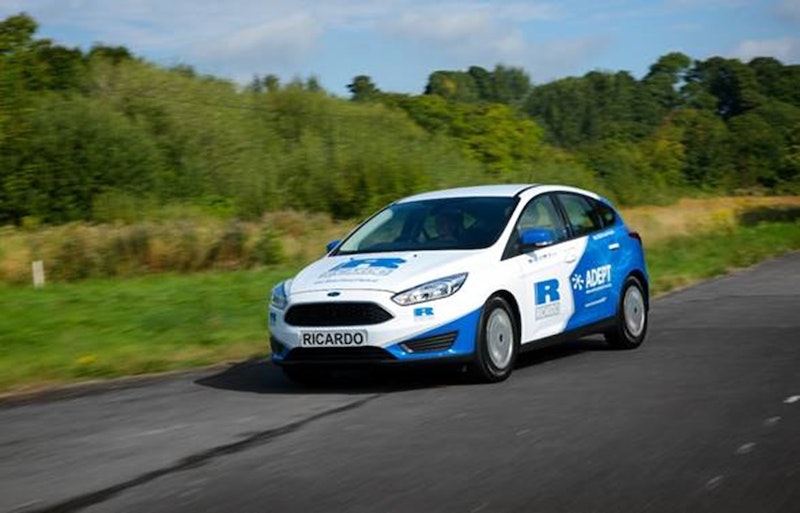 Mild hybrid cars at 48V will first hit global markets in a big way in 2017. Analyst IDTechEx which chairs a session on the topic at a large EV event in Michigan this week confirms that they will be a huge business. They will even sell in larger numbers than pure electric and full hybrid cars combined for some time probably peaking at over $250 billion in sales worldwide, mostly in Europe and East Asia. This is because they keep conventional cars legal under impending onerous carbon dioxide emissions laws and improve fuel economy and performance all at a fraction of the cost of "born electric" car creation and production.
The USA is a laggard in all this while in Europe the achievements continue to delight. Latest news there is achievement of 10-12% reduction in fuel consumption for the ADEPT pan-European car trials. This is equivalent to sub-80g/km of CO2 emissions.
The three-year ADEPT (advanced diesel-electric powertrain) project set the target of developing and validating a range of advanced mild hybrid technologies with 48V 'intelligent electrification' utilising an advanced lead-carbon battery. These have been applied to a Ford Focus project demonstrator.
Key achievements of the ADEPT project have been to show that the integration of hybrid and emissions control systems in the manner envisaged by the project, can deliver a Euro 6b compliant package offering up to a 10-12 percent reduction in fuel consumption, equivalent to sub-80g/km of CO2 emissions (NEDC). It can also offer improved responsiveness and acceleration as a result of the increased full-load powertrain torque available through the hybrid systems.
Moreover, according to the latest updated analysis of the potential cost of production implementation of ADEPT - conducted independently by Ricardo - the system would represent an incremental cost of in the region of €60 per gram/km of CO2 reduction. This is a result that makes the ADEPT powertrain architecture very competitive with other fuel economy solutions such as full hybridization, where costs of implementation can be significantly higher. The ADEPT powertrain concept is also equally applicable - with appropriate fine tuning of design and configuration - to gasoline or alternatively fuelled powertrains.
For consortium partner and switched-reluctance motor-generator technology developer Controlled Power Technologies, 48V electrification is about harvesting and recycling kinetic and thermal energy, explains CPT's founder and chief executive Nick Pascoe: "Our SpeedStart motor-generator, for example, which replaces the conventional alternator and starter-motor, can near instantaneously boost engine power and torque whenever required without having to feed additional fuel into the engine. So not only can we boost vehicle performance and fuel economy, but we can also improve air quality by reducing NOx and particulate emissions. And while SpeedStart also recovers kinetic energy, our turbine integrated exhaust gas energy recovery system known as TIGERS simultaneously recovers thermal energy. Furthermore, 48V mild hybrid technology is equally applicable to trucks and buses, as well as off-road vehicles."
The ADEPT project has been led by Ricardo in a research partnership that has included the Advanced Lead Acid Battery Consortium (ALABC), Controlled Power Technologies (CPT), Faurecia Emissions Control Technologies UK Ltd, Ford Motor Company and the University of Nottingham. The research project was jointly funded by the UK Government's Office for Low Emission Vehicles (OLEV) implemented through the UK innovation agency, Innovate UK, with matching contributions from the participating partners.
For more see the IDTechEx report, Mild Hybrid 48V Vehicles 2016-2031 and Electric Vehicle Traction Motors, Belt Driven & Integrated Starter Generators 2016-2026.
Top image source: Ricardo